Celebrating the Festival of Lights - 405 Magazine 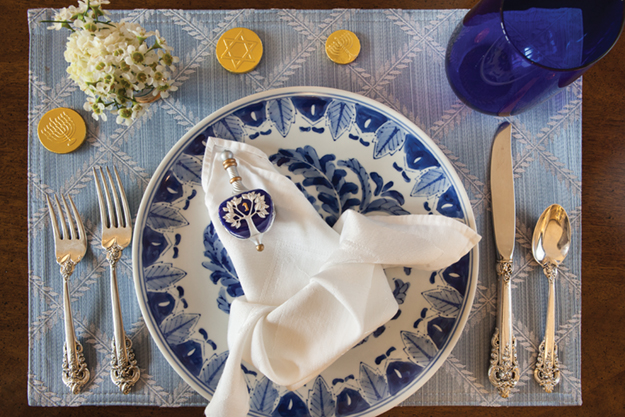 If the beauty of any holiday could be captured in a single place, that holiday would be Hanukkah and the place would be Sherry Barton’s Oklahoma City home.

Barton, whose petite stature belies her larger-than-life personality, celebrates Hanukkah in much the same way she celebrates life: Go big or go home. She readily admits that she “might go a little overboard” with her Hanukkah decorations, which include a collection of almost 50 menorahs she’s collected from all over the world throughout the past several decades. However, the result is a stunning visual tribute to the Festival of Lights that fills her lovely home.

Hanukkah coincides with Thanksgiving (Thursday, November 28)
this year. Beginning at sunset the evening before Thanksgiving (Wednesday, November 27), the Barton family will observe the annual tradition of dinner around a finely appointed table, which will include latkes (traditional potato pancakes) and other favorite dishes, followed by the lighting of the Shamash (the candle from which the others
in the menorah are lighted) and the opening of
a gift for each family member.

For Barton, like many families who celebrate Hanukkah, the holiday represents the joy of family togetherness, a central theme throughout the Barton family’s Hanukkah traditions. “We make it a major holiday in our family,” Barton explains. “Hanukkah represents such a happy time for us and I love making these memories for my grandchildren.”

Taking the place of a traditional mantel, a unique decorative piece that Barton purchased more than 40 years ago (constructed of horseshoe nails) serves as the perfect display for the many ornaments – each one with its own story – that Barton has collected over the years.

In addition to an extensive collection of menorahs, Barton’s Hanukkah decor includes a variety of dreidels, which can be found throughout her home. Barton, who travels frequently to deliver motivational speeches, notes that she’s always “on the lookout”
for Judaical mementoes during her travels.

A Few Of Barton’s Favorite Menorahs

“My father was part of that ‘Greatest Generation,’” Barton says, explaining the special significance of an American flag menorah
she keeps in honor of her father, a WWII veteran who served as
an artillery captain in the Pacific

A favorite from Barton’s menorah collection is this depiction
of famous synagogues of the Western World,
which has the Gate of Jerusalem in the center.

Her fondness for shoes is represented by this “shoe menorah,”
a gift from one of Barton’s observant girlfriends.

One of Barton’s favorite destinations is New York City, represented by two menorahs – one capturing the famous city’s skyline
and another depicting the Statue of Liberty and the arrival
of immigrants at Ellis Island.