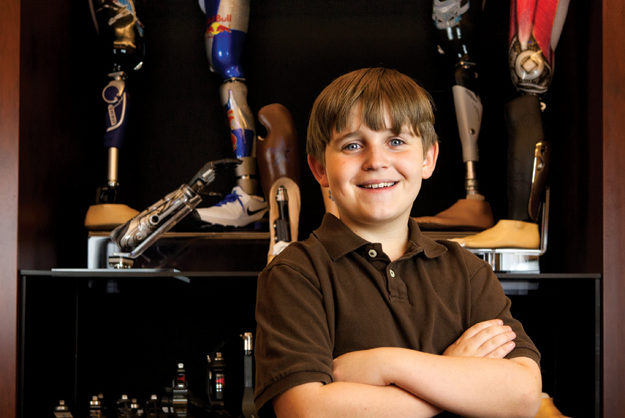 Ten-year-old Jack Love’s blue, laceless Converse sneakers barely touch the rug as he sits in his living room and explains how he went behind his mom’s back.

“She didn’t know until it was in the newsletter,” he says. “I sort of wanted to surprise her.”

His mom, Leigh Love, found out via email while at work at Nichols Hills United Methodist Church – she was startled, but not shocked.

“Jack takes initiative on things,” she explains. “He doesn’t just sit back. So I wasn’t completely surprised. I was surprised he hadn’t told me, but I wasn’t surprised that he wanted to do something like this. He has a pretty big heart.”
So what’s the subterfuge? Jack had watched an episode of “Secret Millionaire” that partly focused on the Limbs for Life Foundation, an OKC nonprofit that raises money for amputees who can’t afford prosthetics.
“It’s just I imagined not having a leg – that’s just crazy,” Jack said. “It’s just scary knowing that so many people don’t have limbs.”

After the episode, Jack went to his Sunday school director about raising money for Limbs for Life. That started a chain reaction of church fundraising, plans for a school penny war and more to come in 2013. Due to his efforts, Jack received the first official award for an ambassador of the Limbs for Life Foundation.

“It was because of his tenacity, his heart,” said Debra South, the foundation’s executive director. “And he didn’t sit in an armchair; he got up and acted. He led his own little campaign.”

If, when asked what the best kind of team-building exercise is, a child responds, “the kind in which your team builds a robot,” that child might belong in Botball. The annual competition tasks groups of middle- and high-school students with constructing and programming robots to complete set tasks on a playing field, teaching participants about engineering, technological applications of math and science, teamwork and more along the way. There’s an introductory workshop at OU January 12-13; visit botball.org for more information. Oh, and the robots are built from supplied materials, so don’t count on entering a small kid painted silver as a ringer.

The 1928-vintage Osler Building in Midtown OKC is getting a luxurious facelift – if all goes according to schedule, revelers should be able to ring in 2014 in a new Ambassador Hotel. Renovations are occurring under the guidance of hotelier and Colcord redeveloper Paul Coury, who envisions seven floors, 54 rooms and one outstanding boutique getaway.

A first novel dealing with friendships that are closer than family and the difficulties in bringing family members closer together (especially across generational lines), all set against a backdrop of international intrigue, might sound dauntingly ambitious. In this case, it helps that author Dennis Dunham is on familiar ground – the executive director of international affairs at UCO spent years working, teaching and writing nonfiction in Korea, filling “The Good-Luck Side of the Rice-Paper Door” with unfeigned authenticity. Released January 26 nationwide, it’s available at Full Circle Bookstore now.

Train aficionados might recognize her as the guest vocalist on “Bruises,” devotees of Tishomingo trio the Pistol Annies know her as “Hippie Annie”… fans of thoughtfully crafted, beautifully sung, personally powerful country music are about to become happily familiar with the name Ashley Monroe. The singer-songwriter’s first solo album, “Like a Rose,” hits stores January 22 – produced by Vince Gill and Justin Niebank, it contains a garden of self-penned verses, including a duet with friend and colleague Blake Shelton.

If your New Year’s resolutions include getting more culture in your life, enjoying one of the finest museums in the region – or in the country – is now on the house. Admission to the Fred Jones Jr. Museum of Art, one of the top five university art museums in the U.S. in terms of its appraised value, is now free thanks to a $60,000 gift from the OU Athletics Department.

“This kind of cooperation has a truly extraordinary impact on the resources and opportunities available to our students and the public,” said OU president David Boren. “We are excited to offer to the entire community this opportunity to view one of the world’s most distinguished collections of art without having to go outside the state of Oklahoma.”

While you’re there, be sure to cherchez la femme – one of the Museum’s current draws is “Woman in the Studio,” a 1956 Picasso painting on loan through August from the St. Louis Art Museum.

Fairest of the Fair

Would-be champions gather from across the country (literally; all 50 states plus Washington, D.C., Puerto Rico and the Virgin Islands) but only one will take the crown. The Miss America 2013 pageant is January 12 in Las Vegas, and our hopes are fixed on Oklahoma City’s own Alicia Clifton. Competition is fierce – Misses Texas and Indiana are twirlers, after all, and the classics never go out of style – but Clifton has an ace or two up her sleeves… or in her shoes. The OU broadcast journalism junior holds not one but two dance-related Guinness world records: most consecutive pirouettes (36) and most fouettés (raised leg whips) in a 30-second span (a staggering 48)

Top of the World

A whopping 113 countries are sending representatives to the Special Olympics World Winter Games, and two of the U.S. contingent are making the trek from our neighborhood: Amy Wollmershauser of Tulsa will compete in Snowshoeing and Edmond resident Stephen Lynn in Alpine Skiing. The place is Pyeongchang, South Korea; the dates are January 29 through February 5; the stars are over 2,000 strong; the aspirations are pure gold.

The Pickle of the Litter

Take a doubles badminton court, hard flat paddles and a whiffle ball and go to town – the result is like playing tennis but on a smaller court and with a slower-moving ball, making it less physically demanding but no less competitive or fun. It’s called Pickleball, and is reputedly one of the fastest-growing sports in America. It’s certainly grown quickly in Oklahoma, where the three-year-old OKC Pickleball Club has swelled to 70 members who practice and play in six metro facilities. And there’s still plenty of room; if your interest is pickled, visit sites.google.com/site/okcpickleballclub to get in the game.