Chip Fudge Buys Relics and Puts them Back Together - 405 Magazine 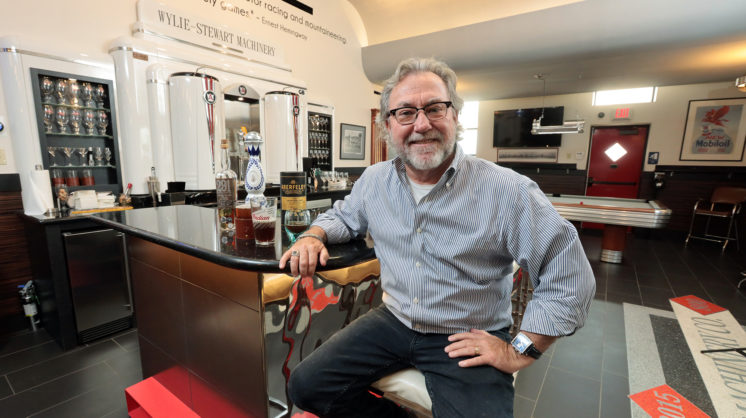 Some of his earliest and best memories are of exploring junk shops and antique stores – highbrow and low – with his grandmother. “She taught me the value of craftsmanship, the love of older things,” said Chip Fudge. It’s “John” officially, but to everyone who knows him, he’s “Chip.”

An Oklahoma City entrepreneur, Fudge was born in Dallas, but his father’s job brought him north to the city he now calls home.

“I dropped out of Putnam City High School in 1975 to join the ‘all volunteer’ army, as it was known then,” he says.

Fudge didn’t take to military service, so he got out, got his GED and headed for Oklahoma State University, taking a pre-law track with a minor in philosophy. Before all that, though, he had a paper route.

At 13, to facilitate that first job, he got a motorcycle; it was the beginning of a life-long romance. He loved taking things apart and – thankfully from his mother’s perspective – putting them back together again. (Not all children are built that way.) In high school, he and a buddy bought a 1958 Chevy, fixed it and sold it for $250.

“I thought I’d killed the fatted calf,” Fudge said. The Bible reference comes out without hesitation, just another phrase in the mind of a furiously curious quester, tinkerer and learner who is earnest without being preachy. “The idea that I’d just made $250 doing something I enjoyed was worth celebrating.”

Two years ago, he sold another car, a 1956 Lister-Maserati, for $1.1 million. It’s an interesting way to measure the trajectory of a life; possibly informative, incontrovertibly a milestone. “It’s an unbelievable feeling to sell a car for a million dollars,” Fudge said, still with a note of disbelief. “I don’t usually make money on cars.” Since then, he sold a 1970 Lamborghini Miura for another $1 million.

Fudge talks cars the way others talk the specific jargon of their trade: makes, models, the total number manufactured, who raced them and where, value, sell price, all the story-based details that make cars the kinds of objects people collect. That’s the fascinating thing about talking to Chip Fudge – you start with a car, and you end with a story about development in Oklahoma City or how a stained-glass portrait of John Wesley, the founder of the Methodist Church, is hanging in an Oklahoma City bar. The stories meander, mostly without segues – sort of like a Sunday drive, back when cars were more a curiosity than utilitarian equipment.

“I think we have a responsibility to build a city that our children and grandchildren will want to live in,” he said. “That’s very important to me.”

That attitude follows from his love of old things: old buildings, old architecture and older people who think about things like legacies. He famously bought Dead People’s Stuff, an architectural antique store at 1900 Linwood, and made a beautiful new development of it, managed by his son Curran. The Fudge family has been in the collection agency business since 1957, but he doesn’t spend much time talking about it; a collection agency is not a beautiful old thing. There’s also real estate, two restaurants and so many projects it would take a whole magazine to detail them.

When he opens his garage, a visitor’s eyes fall on the bar, and behind it, a beautiful old thing that he’s made shiny. “We built the whole garage around that,” he said, gesturing toward the centerpiece of the bar: a piece of equipment from Alemite, a company that’s been in the manufacturing business since 1918.

We’re standing in a room with millions of dollars’ worth of cars, but he built the garage around this gorgeous beer dispenser. There may not be a better Chip Fudge moment – not because it helps us know him better, but as a lovely reminder that he values old, well-crafted things, and that has to be a virtue.