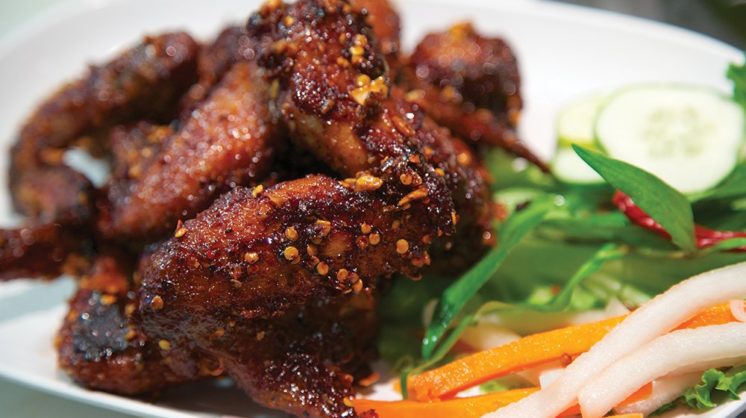 There are dozens of reasons to enjoy traveling – seeing amazing sights, reconnecting with old friends, just getting away from it all – but destination dining elevates a daily necessity to a starring role. Next time you’re hitting the road, plan a visit to these cities where outstanding dining isn’t just an element of the vacation; it’s one of the main attractions.

Portland, Oregon Boar collar meat rubbed with garlic, coriander root and black pepper, glazed with soy and sugar then grilled over charcoal and served with chilled mustard greens, and a spicy chili/lime/garlic sauce. Sounds delightfully confusing, right? Because it is. And the boar collar, known as Muu Paa Kham Waan, is one of a more than a dozen explosive Thai dishes you’ve likely never heard of, served at Portland’s famed and expanding Asian eatery known as Pok Pok. Chef Andy Ricker’s house specialty is half a dozen fresh whole natural chicken wings, marinated in fish sauce and sugar, deep fried, tossed in caramelized Vietnamese fish sauce and garlic and served with Cu Cai – which, to the uninitiated, are pickled vegetables. If you don’t order a drinking vinegar with your meal – be it tamarind, pomegranate, honey, pineapple, ginger Thai basil, turmeric, celery or apple – you haven’t really eaten at Pok Pok.

Its meteoric ascension is but one of dozens of highlights in the Portland culinary world. Anyone passionate about food knows that Portland was a food city before “food cities” were a thing. A trip to Portland requires several days, roomy clothes … and it doesn’t hurt to have some Tums and Tylenol on standby for all the right reasons.

Think Pok Pok sounds exotic? Try starting off your dinner with a flight of vodkas and cold zakuski – an assortment of cold appetizers that ranges from fish spreads and assorted caviar to house-dried beef Basturma, an air-dried beef tenderloin in paprika oil and marinated cherries. Most important, when you sit down to eat zakuski, is the toast (“Budem!”) that comes after completing each shared dish. This is just a starting point when you dine at Kachka, one of Portland’s most beloved restaurants where chef Bonnie Morales serves refined Russian dishes in a lively atmosphere. 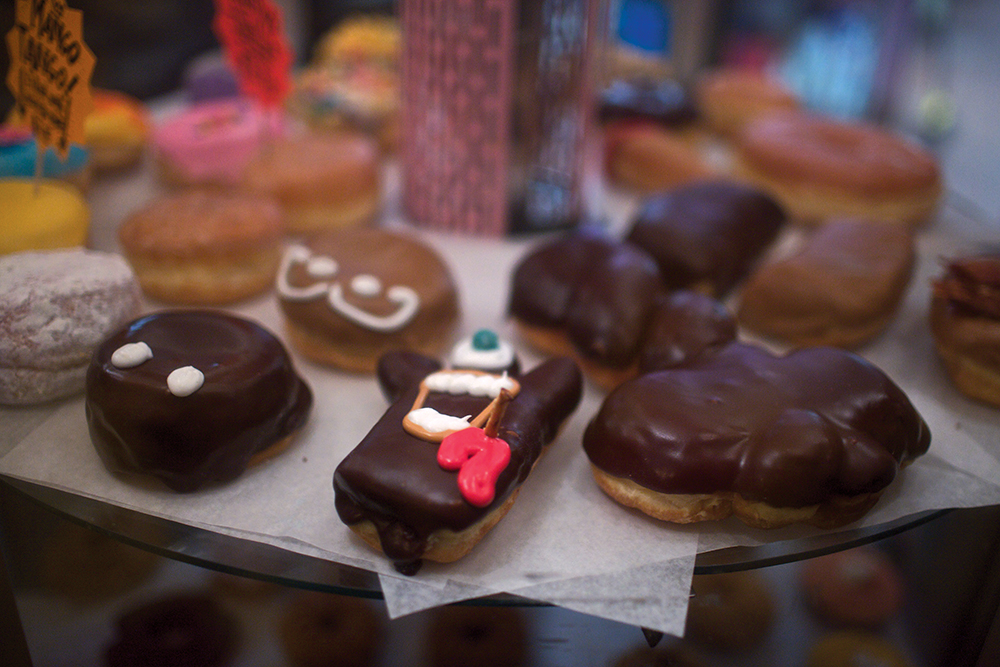 The list of Portland’s “must eat” restaurants is extensive: breakfast at Taste and Alder or Mother’s, lunch at Lardo (there are several), ice cream at Salt and Straw, a trip to Voodoo Donuts … plus, a visit to one of the city’s dozens of food pods (think food truck cities) is mandatory. Here is a rundown of some of my other favorite food destinations worth tasting in Portland:

Canard – Recognized by The Oregonian as “Portland’s 2018 Restaurant of the Year” and Eater National as one of the “18 Best New Restaurants in America,” Canard is chef Gabriel Rucker’s playground. The new wine bar/restaurant set up shop adjacent to Rucker’s successful flagship restaurant and Portland staple, Le Pigeon. Canard is a more casual concept in comparison to Rucker’s other two Portland restaurants, and features dishes such as oeufs in mayonnaise and foie gras dumplings.

Enoteca Nostrana – Possibly the most visually stunning wine bar in Portland, this is the latest project by six-time James Beard Award nominee chef Cathy Whims and partner David West. An encore to Whims’ Italian restaurant Nostrana, Enoteca Nostrana opened directly next door and focuses on natural and experimental European wines alongside classic, regional Italian bites.  A two-story wine cellar shines from the middle of the restaurant – a centerpiece of glass and steel curated by wine director Austin Bridges that can hold between 2,000 and 3,000 bottles at optimal temperature. 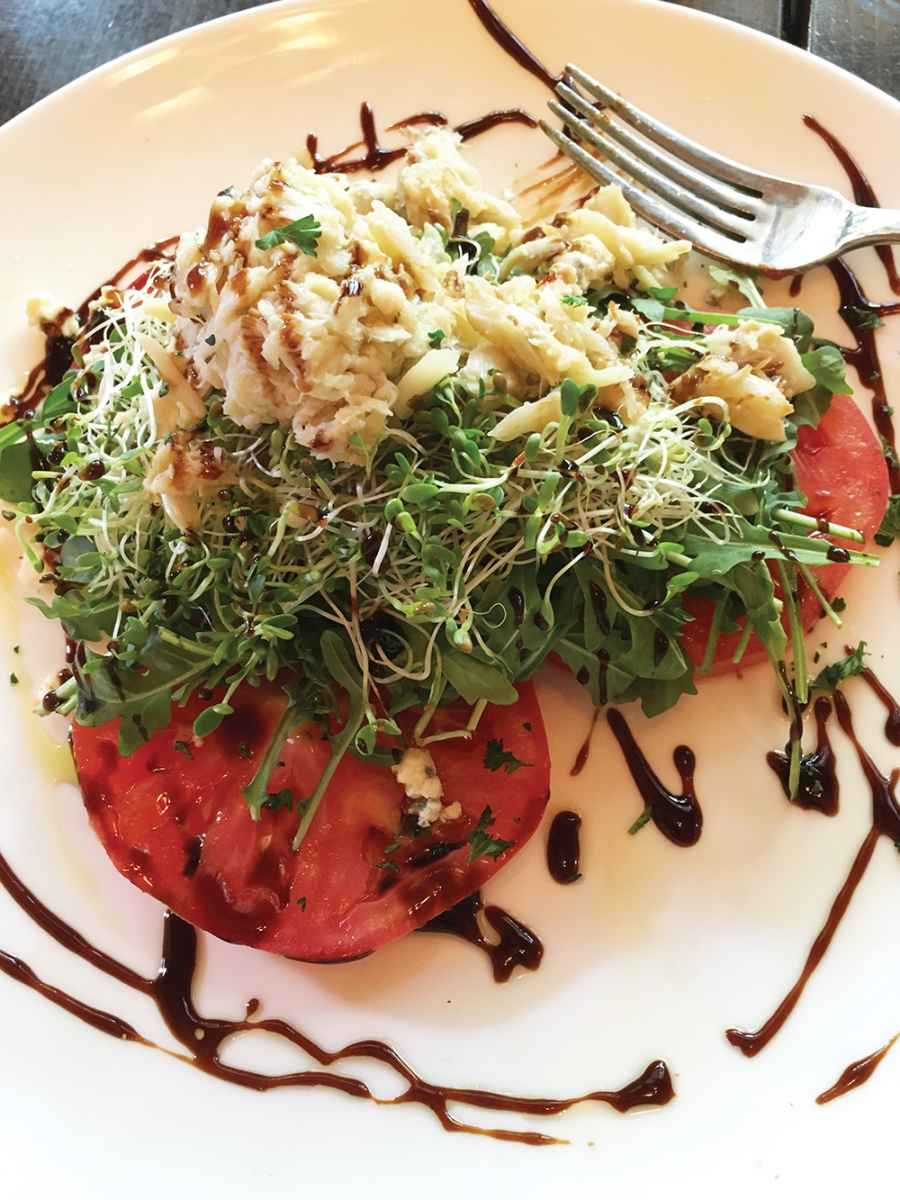 Fredericksburg, Texas The best peach I’ve ever tasted was at the Eckhardt Orchard – an early-fruiting variety named Flavor Rich. Peach season starts in early May and lasts until around mid-August in Fredericksburg, but there are tasty reasons to visit all year-round. The rich German heritage provides opportunities for traditional dishes such as wienerschnitzel and sauerbraten.

For beer and brat lovers, Fredericksburg Brewing Company is a favorite stop. Texas’ oldest brew pub, it offers German favorites with lots of additional choices of American dishes. And the atmosphere is gemütlichkeit.

It’s hard to get more American than a “five and dime” – the vibe at Clear River Pecan Company. Pick up a kolache or turnover for breakfast; enjoy a sandwich or salad for lunch or early dinner; but don’t pass up the ice cream. Out of the 70 kinds of ice cream made here, up to 30 are available every day. Most popular: Mexican vanilla/amaretto and peach with pecan.

For an amazing dinner, with the largest list of Texas wines, reserve a table at Cabernet Grill. Chef-owner Ross Burtwell’s fare competes at the highest level. Wine Enthusiast Magazine named it one of the nation’s top 100 wine restaurants. This is upscale dining with a Texas Hill Country casual atmosphere.

Fredericksburg is also long on extras. For sausages and cheeses, check out Opa’s. Fredericksburg Pie Company features from-scratch pies; the peach praline pie rocks. My #1 Do-Not-Miss extra spot is Chocolat. Owner Lecia Duke is the first U.S. chocolatier to master the art of European-style, liquid-centered chocolates. Find ones filled with anything from fruit juice and Texas wines to tequila and Tennessee whiskey.

There are lots of reasons to visit Fredericksburg – wine, history, shopping and scenery. But this great taste of Texas may be the best. 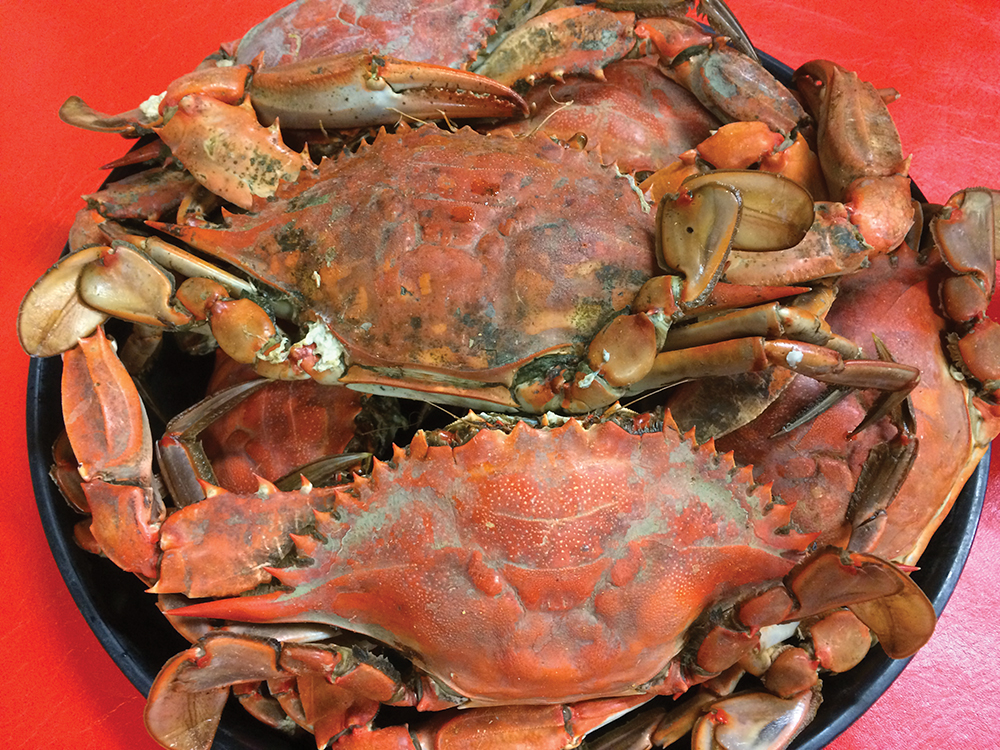 Seafood Palace in Lake Charles, Louisiana, specializes in local seafood such as crabs, crawfish and shrimp.

Lake Charles, Louisiana Let Napa have its wine trail; Southwest Louisiana has a boudin trail. This is the heart of Cajun country, and you’ll find plenty of opportunities to sample good regional fare in Lake Charles. Boudin recipes vary from one cook to the next. Basically, it’s like sausage – generally pork-based, but crawfish, shrimp, even alligator can be the base – with rice, onions, parsley and spices added to the ground meat. For a real heart-stopper, order boudin balls. The sausage is taken out of its casing, battered and fried.

Some of the best boudin can be purchased in bait shops or filling stations, but unless you’re guided by a local, you’ll probably want to stick to a more conventional shopping stop. A good choice is LeBleu’s Landing in nearby Sulphur, a combo restaurant and meat market.

In Lake Charles, you can order boudin balls at Seafood Palace, but here you’ll really want to try the gumbo, the crawfish, the crabs. Lots of choices at this local favorite.

Sloppy’s Downtown has a more eclectic menu, but it’s hard to get more Cajun than their Saturday zydeco brunch. Great music, dancing and food to get your feet going and your stomach singing! They even have boudin-stuffed beignets.

There’s much more than Cajun on menus at the restaurants in the L’Auberge Casino Resort, but I couldn’t resist the Cajun Benedict at Favorites Southern Kitchen there – rounds of Southern-style corn bread topped with fried green tomatoes, sliced avocado and poached eggs, drizzled with a crawfish Hollandaise sauce and surrounded with slices of spicy andouille sausage.

Other great stops include Calla for small plates and tapas; 1910, which features local ingredients prepared with French fare and Villa for Italian favorites. For a fun, funky lunch, head for Botsky’s – amazing hot dogs with myriad choices of toppings – and Pops & Rockets Pop Lab, where they hand-make gourmet popsicles and ice cream.

Lake Charles cuisine ranges from the sublime to the ridiculous – sublimely excellent to ridiculously delicious. 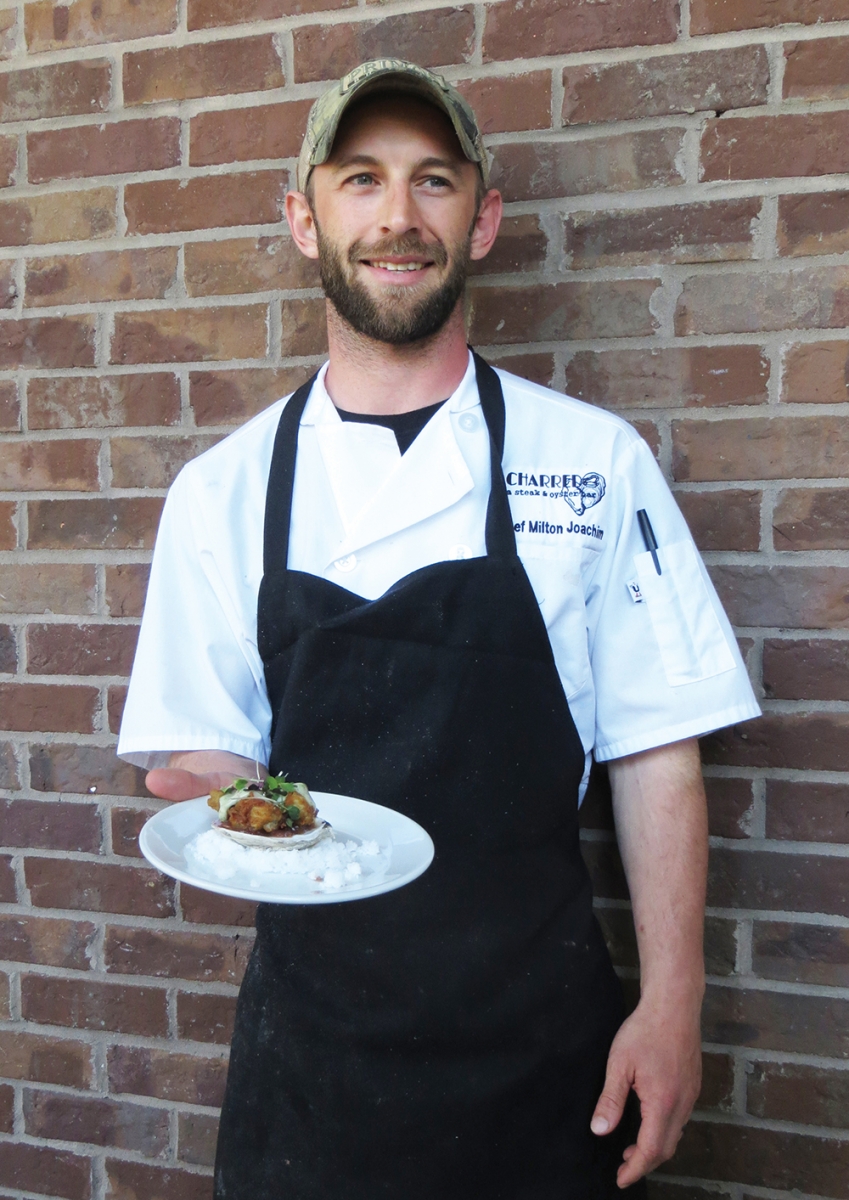 Ocean Springs, Mississippi Across Biloxi Bay from the eponymous city with its busy casinos, live oaks arch over downtown streets lined with interesting little galleries and boutiques in this idyllic little town. It is most notable for the artists of the Anderson family, founders of Shearwater Pottery, and Walter, a most eccentric painter, potter, muralist and writer. And then there’s the food – seafood, of course, and southern specialties. And some great twists on old favorites.

Charred, a steak and oyster bar, does cool things with oysters. There’s always raw, but I really liked Oysters Joachim, chef/owner Milton Joachim’s own take: fried, on a bed of spicy red onion marmalade and topped with a tarragon aioli and micro-greens. They’re served on a half-shell perched on a mound of sea salt – lovely presentation. And his steaks are all aged and seared at 800 degrees. I would love to have tried his eight-ounce ground ribeye burger with aged Cheddar and hickory-smoked country bacon jam, but when in Rome …

I got both Southern and seafood at Mosaic, with a grits cake smothered in a tomato cream sauce and shrimp. The menu is extensive, with something for every taste, including tapas and vegetarian and vegan options. Variety is the spice of their cocktails – seven different twists on a mojito and 10 on martinis.

Maison de Lu has a French flair and a beautiful patio for outdoor dining. Lunch staples are sandwiches and salads, with heavier dishes saved for dinner. The menu is not large, but daily specials add to the usual dishes.

If you’re just in the mood for something sweet, French Kiss Pastries is your spot. In addition to a wide choice of European-style pastries, several light lunch items are on the menu. Or stop at the nearby Candy Cottage for a New Orleans-style praline; they make them fresh each day.