Class is in at Meat Market Refectory - 405 Magazine 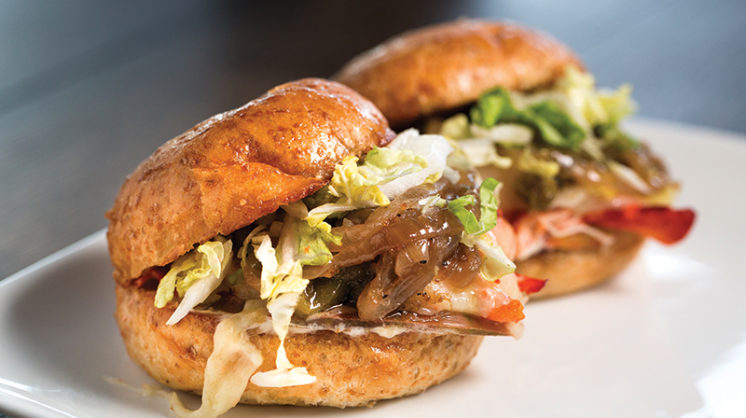 OK, pop quiz: Have you ever before heard the word “refectory”? I dabble in vocabulary for a living, and I couldn’t have told you without looking it up that it basically means a group dining room, with a connotation of education. Schools have cafeterias, extremely fancy schools have refectories. This means that while the name Meat Market Refectory is a bit of a mouthful, it’s at least an apt one for this restaurant: While it’s not attached to a school, it does put a premium on providing class. And the mouthfuls are rather good.

The interior is a striking space from the hardwood floor up. The visual centerpiece is the broad circular bar, overtopped by a sinuous blue blown glass chandelier and surrounded by gleaming liquor-laden shelves and tall chairs of gray tufted leather glinting with silver nailheads. Booths line the wall of the central space, with more private tables stretching down the west hall. Sliding doors can divide the south seating section into variable sized banquet areas, each with its own a/v setup and independent lighting, giving it a hotel ballroom-like feel for meetings or small groups.

Wherever you’re sitting, it’s hard to not be impressed by the attention to detail, from the ranks of folded cloth hand towels in the bathroom to the heft of the curtains in the private dining room that seats 10 and contains a matched pair of beautifully carved Peruvian storage chests.

Extra stylistic flourishes such as cucumber slices in the water and the weight of the ornate flatware help reinforce an overall impression of opulence, as does the excellent service.

Co-owner and chef Steve Spitz told us their intent is to emphasize friendliness over stiff decorum, but I mean it as a compliment when I say that there’s at least a little formality inherent in a touch I haven’t seen since the Coach House closed its doors: The waiter’s use of a crumber to clear the tablecloth between courses. 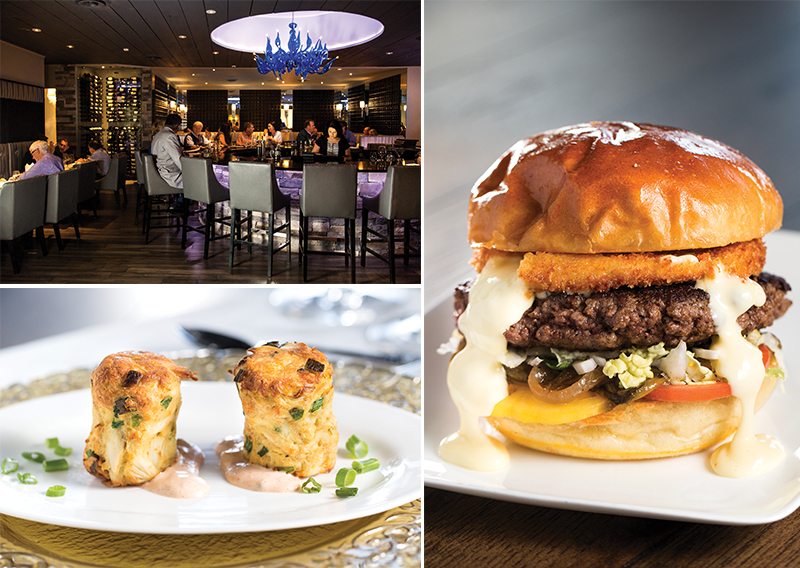 Getting to the Meat of It

Speaking of those courses, Spitz stresses the efforts to which he goes to obtain the freshest and finest possible ingredients, including certified organic chicken, eggs and produce and the highest possible grades of beef and pork. The menu undergoes slight seasonal variations, depending in part on ingredient availability but also evolving with time and taste.

One fairly consistent element, though, is the smoky spice of Hatch green chiles. Spitz explains, “We order Hatches by the ton, literally – our first order was for 2,000 pounds, and we went through it in under three months.” Not every dish boasts them, but they’re notably plentiful: adding a small flicker of heat to the remoulade that sets off the slight sweetness of the crab cakes (which are mostly crab, not filler, and entirely delicious), topping the various burgers and sandwiches and starring in a pork stew that’s one of Spitz’s specialties. That recipe’s in a celebrity cookbook alongside contributions from Martha Stewart and Mario Batali, and you might have seen it in person recently when Spitz did a cooking demonstration at Festival of the Arts.

Not every dish completely works – I thought the lobster BLT’s thick toast was a little too buttery both in flavor and on the fingers, so I’d recommend getting it and its chile-rubbed applewood smoked bacon in the form of sliders instead – but when it does, it’s outstanding. Case in point: The house burger is topped with a breaded envelope of fried brie, so when you break the seal, the cheese flows out to coat everything with richness. Knife and fork required. I didn’t actually begin to weep, but it was close; that’s a marvelous concept. And the beef is all prime, since it’s trimmed from their ribeyes and filets, ground and delicious.

Plus, and you might be able to presume this since they’re a high-end steakhouse, but it bears emphasis: The custom-aged filet is just amazing. Extremely thick, nearly fork tender, so flavorful … the one I tried was in the top 10 steaks I’ve ever eaten, maybe top five. The ribeye wasn’t as good, but not much else could be. 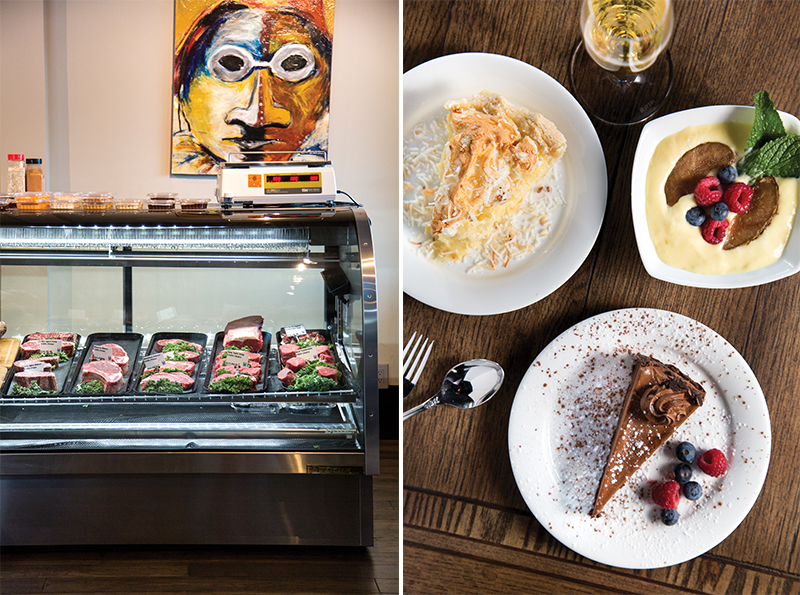 And do stick around for dessert. They make a very nice coconut cream pie, and the chocolate torte is just on the right side of too rich, but for something distinctive, try the champagne sabayon. It’s a light, smooth custard with a shimmer of champagne on the palate and a nicely enjoyable, but not overwhelming, sweetness.

Premium ingredients aren’t exactly inexpensive, so while you might not set a record, especially at lunch, going lavish carries something of a price tag. But if you’re looking for a beautifully atmospheric spot for fine group dining – especially with Mother’s Day on the horizon – it might be time to add “refectory” to your vocabulary.

One extra reason to visit, even if you don’t wish to linger over a sumptuous meal, depends on the Refectory’s commitment to quality ingredients: There’s a small but select butcher shop and grocery on site. Local honey, premium cheeses (I can vouch for the Red Dragon) and plenty of magnificent-looking viands – Spitz says it’s the only retailer in OKC to provide hormone- and antibiotic-free NatureSource beef. Take something great home with you.