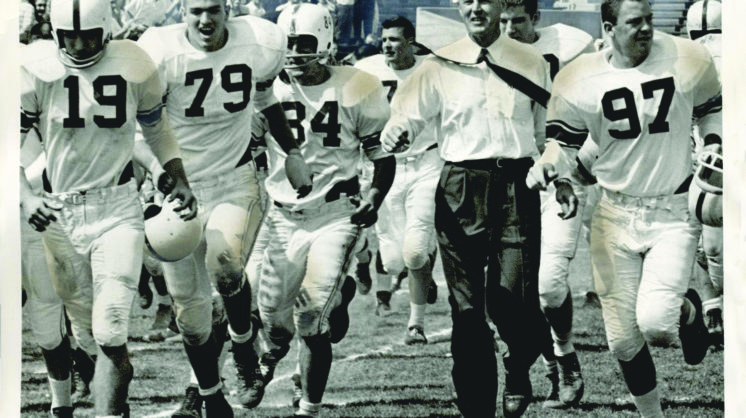 Photograph used for a story in the Daily Oklahoman newspaper. Caption: "Heading toward the dressing room with a comfortable halftime lead of 28-8 are coach Bud Wilkinson and a happy band of Sooners." DATE: April 21, 1962 Photographer: Cobb, Dick

The University of Oklahoma football program owes much of its legacy as a sports powerhouse to the year 1953. It was the year head coach Bud Wilkinson and a cadre of all-star players unleashed a 47-game winning streak that smashed NCAA records and remains a record today.

But it wasn’t just the winning streak and three national titles that made Wilkinson one of the greatest coaches in NCAA history. He was a brilliant strategist with media savvy, and his players loved him.

“Most successful coaches incite enough envy to make enemies,” a New York Times columnist wrote in 1964. “Bud has none and yet he may have been the most successful coach of this generation. The cynics will say of other coaches, ‘He’s great, but …’ With Wilkinson, there are no ‘buts.’”

Charles Burnham “Bud” Wilkinson was born in 1916 in Minneapolis. He attended the University of Minnesota, where he played football and obtained a degree in English in 1937. He enlisted in the Navy during World War II and served aboard the USS Enterprise, where he aided in the battles of Iwo Jima and Midway.

While serving, he became acquainted with two coaches who would be pivotal in his career: Don Faurot and Jim Tatum. Faurot was head coach at the University of Missouri and is credited with inventing the Split T offensive formation, which Wilkinson learned while coaching naval teams with him and later perfected at OU, said Justin Lenhart, museum curator at the Oklahoma Sports Hall of Fame. Meanwhile, Tatum left the Navy and was named head coach at OU in 1946, and he hired Wilkinson as an assistant coach. Tatum left OU a year later, and the 31-year-old Wilkinson took the top coaching spot.

By 1953, Wilkinson had earned adulation from OU’s administration. He led the Sooners to a 31-game winning streak that included a national championship in 1950 and a Heisman Trophy won by halfback Billy Vessels.

“Adding to Wilkinson’s list of impressive credentials was the fact that the Sooners had never lost in conference play during his tenure as the head coach … it had taken a wise strategist like Paul “Bear” Bryant (then at Kentucky before becoming an Alabama legend) to shatter America’s longest winning streak,” wrote author Jim Dent in his book The Undefeated.

But in fall 1953, the OU squad was flagging. An early loss to Notre Dame and a tie a week later against Pittsburgh left the Sooners coaching staff scratching their heads. Something must change. By the third game of the season against Texas, Wilkinson had dissected the offense and recalibrated with defensive end Gene Dan Calame as quarterback. The strategy worked with a 19-14 win over the Longhorns. The OU juggernaut would not fall again until Nov. 16, 1957, in a 0-7 home loss to Notre Dame.

Wilkinson retired from OU in 1964. “He did a lot at Oklahoma that people don’t fully appreciate,” Lenhart said. “He was one of the first to get players together in dorm rooms. He pioneered the Sunday coach’s show on television.

“When he was asked later in life about his accomplishments,” Lenhart said, “he didn’t talk about winning streaks and national titles. He said it was breaking the color barrier in 1957 (at OU). Bear Bryant didn’t integrate in Kentucky or Alabama until 1960. Texas wasn’t doing it. Arkansas wasn’t doing it. It was a big deal.”