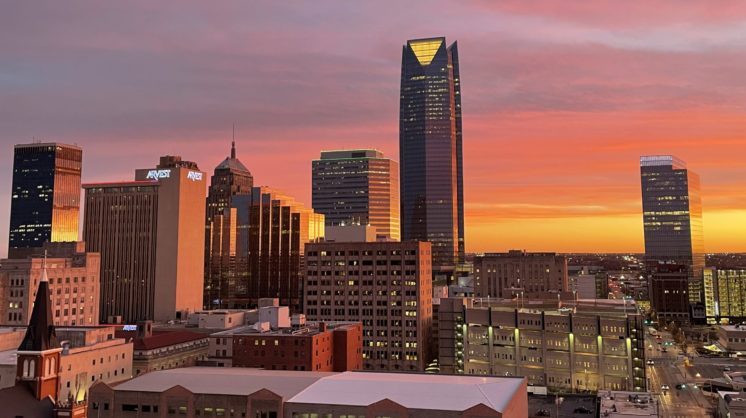 One of our city’s best attributes isn’t talked about nearly enough. Do you want to own land and a lovely family home in the Oklahoma City metro? You likely can. How about having your own parking space—a garage, even—plus air conditioning, a washer and dryer, a dishwasher, and an ample yard? Yep, you can find that too.

Lifelong OKC residents may be unfamiliar with some of the housing market challenges found in other large cities. Standard amenities elsewhere may not be available without a large sum of money. Also, coming up with the down payment may prove to be an insurmountable task when home prices are sky high, and soaring.

So consider this glimpse into the life and housing scene in 10 of the most populated U.S. metropolitan areas. While we cannot necessarily compare apples to apples—The Big Apple has very little in common with The Big Friendly—we can compare how far $300,000 will take you. We believe Oklahoma City has one of the best (if not the best) housing costs of any top 25 city nationwide … and that’s an attribute worth talking about.

Oklahoma City is a sprawling city, with no mountains or large bodies of water to contain it. Downtown living’s influx of restaurants and activities make the area attractive, while suburban living is popular for families, offering spacious homes and excellent public school districts. Living in the ’burbs may require a reasonable 20-minute commute to work. Either way, you’re probably going to want a car to navigate the sprawl. The low cost of housing is due to a combination of factors, including a large amount of developable, flat land.

San Francisco has a diverse population, and its surrounding waters offer easy access to nature. Many tech giants call the “Fog City” home. Substantially higher prices make owning a family home challenging. However, for social butterflies, the city has one of the largest populations of singles in the nation. Only home buyers with limited income—those who qualify for government housing assistance—can purchase a $300,000 condominium, offered well below market rates.

With pleasant weather year-round and beaches, deserts, and mountains surrounding the city, Los Angeles is a dreamy place to call home. Speaking of dreams… Artists are everywhere. You may spot a famous face, and your waiters and baristas may also be auditioning for their turn on screen. The City of Angels is home to 3.967 million people (an almost identical population to the entire state of Oklahoma, which lands at 3.957 million). People move here from all over the world, so the city is culturally diverse. However, residents must contend with the high cost of living, a difficult job market (L.A. maintains a high unemployment rate), and terribly congested highways.

Getting around Chicago is a snap, thanks to its public transportation. Catch the ‘L’ (short for “elevated”) train to explore historic theaters, community gardens, museums, and buildings that exemplify Chicago’s world-class architecture. The clear and open Lake Michigan shoreline brings beautiful views and bone-chilling winters to the “Windy City.” The crime rate may also give you chills. Chicago records 943 violent crimes per 100,000 people, according to a CBS News report, giving it a higher violent crime rate than the national average.

Dallas is known as an economic hotspot, making it a popular relocation choice for those entering the job market or seeking a career change. In 2020, Dallas had the highest office job growth in the country with a 5.7 percent year-over-year increase. Dallas has been criticized for its lack of natural beauty—cited as an urban sprawl of concrete—though the White Rock Lake area on the east side easily counters that notion. And among those miles of concrete blocks, you’ll discover amazing restaurants, shops, and museums, as well as plenty of friendly faces.

If live music is your jam, Austin won’t disappoint. Live music shows can be found around town almost any night of the week, and festivals such as South by Southwest and Austin City Limits have received national acclaim. Austin has attracted a steady stream of transplants, contributing to its skyrocketing housing prices and continuous construction, as roads can’t keep pace with the increase in cars. Creativity flourishes here, and residents aren’t afraid to “keep Austin weird” with their colorful expressions. The Barton Creek Greenbelt, Town Lake, and well-kept parks and trails encourage an active lifestyle.

The “Mile-High City” might take your breath away. Perhaps it’s the higher altitude (Denver is 5,280 feet above sea level) or the Rocky Mountain views. Denver is an outdoor enthusiast’s playground with biking trails throughout and some of Colorado’s best ski slopes within driving distance. Denver is within a day’s drive of 58 mountains with peaks reaching 14,000 feet, so mountain climbers love it too. Residents praise the city’s innovative public school choice program but, with a quickly growing population, they bemoan the heavy traffic. Snowy long winters are also a big part of living here.

Abundant sunshine and affordable living (compared to some Florida hotspots) have attracted retirees to settle in Phoenix for years. However, younger folks are beginning to migrate to this great city, too. According to 2019 U.S. Census data, more than 20 percent of the 1.6 million residents are millennials, and Phoenix has seen the fastest growth of any major city in the past decade. While the sunny weather is a bonus for many, it’s important to remember that Phoenix is located in the Sonoran Desert. Be mindful when you hike; the summer heat can be intense.

Like Oklahoma City, Nashville is a relatively affordable city to reside in, compared to other major cities nationwide. However, the Nashville housing market has become increasingly competitive and expensive. Young adults, ages 25 to 34, make up the largest demographic in “Music City,” adding to the vibrancy and culture of the city. Recognized as the “songwriting capital of the world,” you’ll find country music’s finest living here, along with the annual Country Music Awards and legendary Grand Ole Opry.

The thrill of living in the “city that never sleeps” is undeniable. When it comes to art, history, culture, and business opportunities (65 Fortune 500 companies are headquartered here), no place compares to New York City. It is also the most culturally diverse city in America, attracting people from all over the world. However, living among the city’s glitz and glamour isn’t cheap. Skyrocketing rent and housing prices make NYC the seventh most expensive city in the world. Best to move here with a high-paying job, or prepare to share your space with roommates.