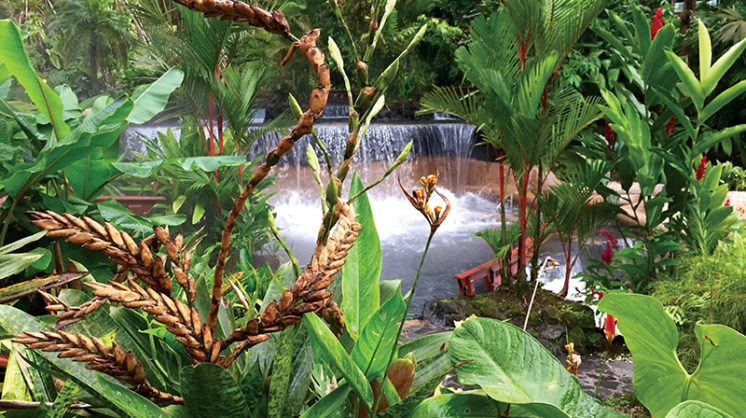 I’d spent nearly a week in Costa Rica with NAMU Tours and Costa Rican Vacations. I had watched alligators along the Tempisque River in Palo Verde National Park just outside Guanacaste; snorkeled in the Pacific on an afternoon catamaran ride off the coast of Playa Del Coco; earlier in the day, after a visit to Volcanoes National Park, I had gone swimming under the crystal waters of the 250-foot La Fortuna Waterfall.

Half an hour’s ride away was my hotel, the world-renowned Tabacon Grand Spa Thermal Resort and Luxury Hotel. There I would spend my last day in Costa Rica, reflecting on the colorful insanity that had been my stay in the Central American paradise. Shortly, a van would pick me up outside, and after a short drive to the Tabacon Springs themselves, which are largely open to the public, I would surrender myself to a day of steamy mineral water, sublime scenery, cocktails and a touch of quietude.

Boasting six dormant volcanoes, Costa Rica has no shortage of hot springs of varying temperatures, flow volumes and mineral content. Hot springs have long been a soothing respite for visitors drawn to the biologically diverse country’s unprecedented breadth of rainforest hiking trails, zip lines and white water. While many hot spring resorts in the area either re-circulate or drill for the geothermally heated rainwater that fills their pools, Tabacon’s springs are completely natural. The tropical resort offers five different tumbling springs with temperatures ranging from a refreshing 77 degrees F to as hot as 122.

There are two main branches to the steaming river that flows through the hotel and thermal resort’s spectacular gardens, and one cold river spring that flows down the volcano from the rainforest. These streams and rivers collect beneath cascading waterfalls into more than a dozen pools of varying sizes and depths; one is large enough to host a well-appointed swim-up bar. Some smaller pools are available only to guests staying at the hotel, providing utter tropical seclusion with the best views of the Arenal Volcano and the surrounding rainforest.

The Tabacon is an intimate hotel with tremendous personal service, two restaurants and two of its own swimming pools filled with water channeled from the hot springs. In fact, water features, fountains, small falls and pools are everywhere. The rooms themselves are spacious, indulgently comfortable and meticulously decorated with local art, Spanish tile floors, granite countertops and unrivaled views of the surrounding rainforest and the towering Arenal.

To be anywhere in Costa Rica practically requires keeping your head on a swivel and your senses heightened. From every direction, the sound of scurrying and scratching feet, territorial shrieks, throaty warbles, shrill squeals and guttural moans permeate the wet, verdant air. Splashes, subtle hisses and lengthy rattles rise and fall in a euphonious fashion. The occasional pop of color as a tanager dips from one flowering plant to another is a bright reminder that attached to each of the huge numbers – 210 species of mammals, 878 species of birds, 218 species of reptiles and 35,000 species of insects – is something that is beautiful and something that is alive.

Despite its small size, Costa Rica boasts 4 percent of the earth’s living species, and for decades, travelers have been drawn to this biological diversity and splendor. The country claims 27 National Parks, 58 wildlife refuges, 15 wetlands, 32 protected zones and eight biological reserves, each exploding with rivers, streams, waterfalls, coastlines on both the Pacific and the Atlantic – all home to wildlife and beauty beyond imagination.

As I wait for a shuttle to pick me up and take me on the easy ride from the hotel to the hot springs at Tabacon’s Thermal Spa, a hummingbird whizzes impossibly close, en route to one of thousands of flowers in the kaleidoscopic, wandering garden that backs up to the edge of the surrounding rainforest. Along this forest is the narrow road to the hot springs. 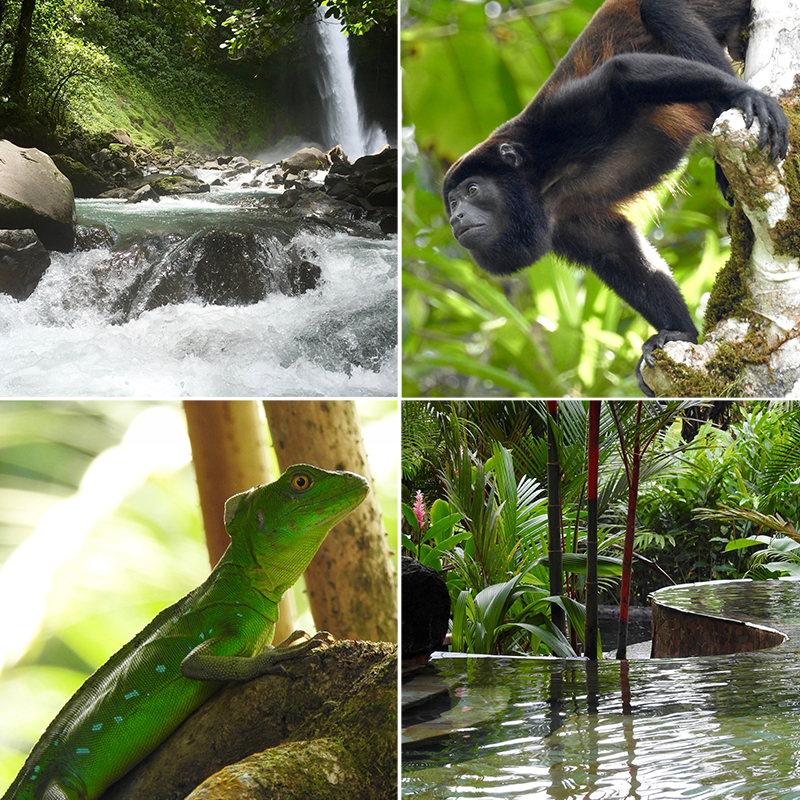 Transfixed by acrobatics of the hovering, iridescent hummingbird, I don’t even notice when the shuttle to the springs pulls up. Over the course of my stay, I’d counted hundreds of birds, seen sloths, monkeys, iguanas and frogs. I’d been immersed in wildlife for a week. So much so, that by trip’s end, I began to realize that while I had seen and photographed a lot, I hadn’t really experienced anything at all.

“Pura Vida” (translated as “pure life,” and the most important phrase in all of Costa Rica), says the driver with a toothy smile as he slides open the shuttle door. “You want a ride to the spa?”

I look around. The hummingbird has vanished from the flower, but a handful of parrots chat loudly above and a giant Crested Guan, a turkey-like bird with a sharp red and blue face, crashes through the canopy. Recently, it had stopped raining, but the sound of a million residual droplets of water falling from leaf to leaf toward the forest floor keeps the “rain song” active long after the storm’s passing. Despite this temporary respite, the clouds above the canopy line promise more rain. The world around me, more than ever, feels alive.

“I think I’m gonna walk,” I say, watching an iguana lazily cross the road at the gate of the hotel.

A howler monkey sounds its guttural cry from a tree nearby. It is as intimidating as it is beckoning. Thunder cracks in the distance. He is right; more rain is coming.

“All the better if it does,” I reply, and begin the beautiful, wild walk at the base of a volcano along the edge of the lush rainforest, heading to healing hot springs for some pure living – or as they say in Costa Rica, “Pura Vida.”