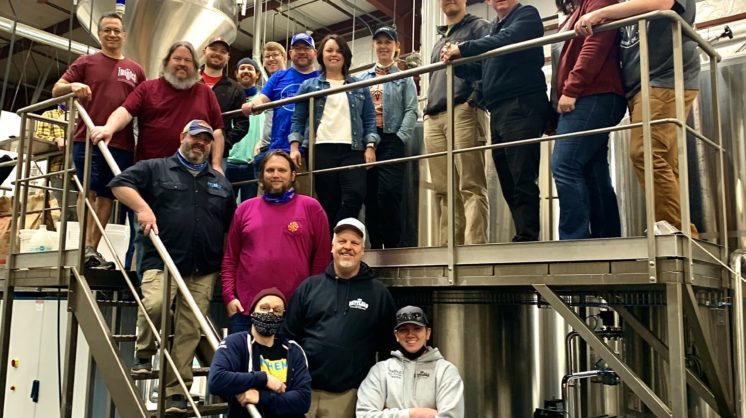 A few dozen Oklahoma brewers gathered at Lively Beerworks on Wednesday, April 7 – National Beer Day – to work collaboratively on Brewers Reunion, a New England style IPA that will arrive in craft breweries around the state May 10. Tabbi Burwell, the executive director of the Craft Brewers Association of Oklahoma, said proceeds from the sale of the beer would help the CBAO and further the mission of highlighting craft beer around the state.

“Craft breweries around the state will buy Brewers Reunion by the half-barrel, and then 100 percent of the retail sales will stay in the brewery,” Burwell said. “We think it’s a great way to drive foot traffic to the taprooms.”

The limited release IPA was made with ample help from partners around the country. Patrick Lively, founder of Lively Beerworks, said all the ingredients were donated as part of the charitable collaboration.

“We received Sultana and Trident hops from Hopsteiner,” Lively said. “The grain came from Enterprise Grain Company, and the yeast was donated by Omega Yeast. We’re grateful that our product suppliers wanted to be involved in the project.”

To help increase the total percentage that goes to the CBAO and local brewers, the collaboration utilized a new provision in the 2016 reform to the state’s alcohol laws.

“It’s called the Charitable Collaboration License,” Lively said, “and it allows us to distribute a product outside the normal channels, so we can sell directly to the breweries rather than lose a percentage in the normal distribution channels. The only relevant rule is that some of the proceeds must go to charity.”

Lively said the batch would yield about 50 half barrels, and 42 were already spoken for when the brewers gathered at the brewery. The rollout is set to coincide with American Craft Beer Week (May 10-16), so check with your favorite local to see if they’ll be carrying it. Given the current numbers, it’s assumed it will only be available on tap at the breweries.

“We’re shooting for a light, hazy IPA with very low IBUs and only 6.5% ABV,” Lively said. “It’s a perfect summer beer, and it’s one that won’t occupy taps for long. It’s going to move because it’s easy to drink and low alcohol.”