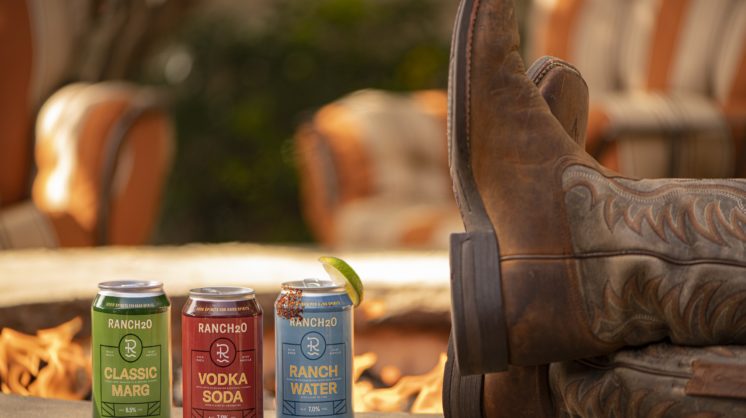 Ranch2O Spirits is a new line of canned cocktails from Texas that should capitalize on the seltzer craze without being hard seltzer. Each cocktail in the line is made with soda water – thus the similarity to seltzer – but each is also made with real spirits, and so is not a malt beverage. CEO and founder Amelia Lettieri said, “There’s always that taste to a malt beverage, and I don’t like it. I wanted to create a cocktail I enjoyed drinking, and one that was a true cocktail experience.”

A graduate of Texas A&M who hails from Dallas, Lettieri and her husband Paul launched Ranch2O in 2019, and their products are now in five states, including Oklahoma. The lineup includes four cocktails: Ranch Water, Classic Marg, Vodka Tonic and Gin Fizz, the latter of which should launch in Oklahoma in August.

“Ranch Water was first,” Lettieri said. “We tasted about 30 premium tequilas to get the flavor profile we wanted. We worked with a beverage formulator to help us with the process, and we think we’ve created a lineup that will resonate with everyone.”

The cocktails are in fact delicious and refreshing, with none of the aftertaste or odd finish associated with malt beverages. Ranch2O cocktails taste good up front and across the mid-palate, and then finish clean. The only real competition in Oklahoma for the sparkling style is High Noon, since it’s a vodka soda, not a seltzer.

“We knew we wanted to do a margarita, too,” Lettieri said. “It’s the number one cocktail sold in America, so it makes sense, but the flavor has to be consistent with what people expect. We had three goals when we started formulating our recipes: portable, shareable and consistent.”

Shareable is important, since the 12-ounce can sizes mean there are slightly more than two cocktails per can. The relatively low ABV (6.5-7 percent) helps, but it’s still not one drink. For the health-conscious, the calories are around 150 per can, a surprisingly low number, and the sugar content ranges from two to four grams per can.

Ranch2O’s co-packer is distilling the gin and vodka for the line. “Our number one step was to get good booze,” Lettieri said. “We knew it would show up most in the Ranch Water, and that’s why we worked so hard to source the best tequila for our recipe.”

Rounding out the lineup in Oklahoma is the Vodka Tonic, which is made with a splash of cranberry juice. Lettieri said they are in the process of formulating two more cocktails for launch next summer, but the specifics are being kept secret for now. Lettieri wouldn’t say what current case production is, but she did say sales and production are outpacing distributor Southern Glazer’s Wine and Spirits’ expectations.