Dance Fever: The Town That Inspired (and Got) Footloose - 405 Magazine 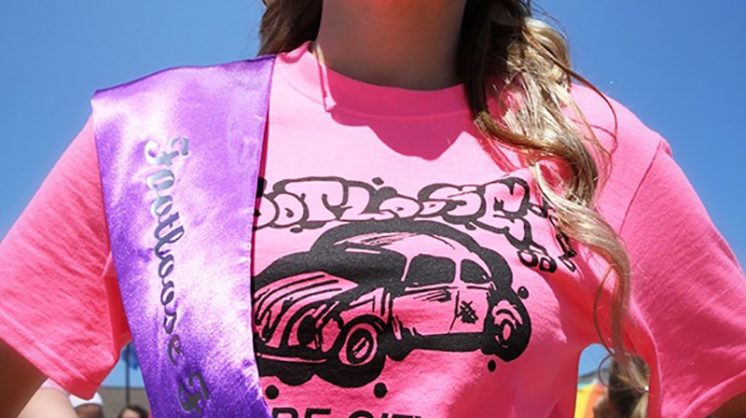 It’s The Sort Of Ironic Twist That Would Make For A Great Movie.

The plot: A perceived danger is banned for decades only to become, once allowed inside the city limits, the very thing that brings the community together for generations to come.

And so it came to pass in Elmore City, a farming and oilfield town halfway between Oklahoma City and the Texas state line.

Dancing – which had been forbidden for 82 years, through 15 presidencies – is now the town’s point of pride.

In an unlikely turn of events 35 years ago, the Garvin County town of 700 souls made national news when its high school junior class won permission to host a prom. The dance would be the first since Elmore City was incorporated in 1898.

Headlines about the town’s ban on dancing inspired a Yale-educated writer to create the screenplay and lyrics for what would become an American cultural juggernaut. The events in Elmore City sparked an iconic 1984 movie, multi-platinum soundtrack that displaced Michael Jackson’s “Thriller” from the top of the charts, successful 1998 Broadway musical and 2011 movie remake, building a multi-million entertainment franchise known by a single word: “Footloose.”

The ban on dancing in Elmore City was instituted before statehood, in an attempt to keep the Chickasaw Nation town clear of carousing.

When the students from Elmore City’s Class of 1981 petitioned to overturn the ban, traditionalists dug in their heels. Mary Ann Temple-Lee, junior class officer and daughter of the school board president, remembered years later that opposition to legalizing dancing was headed by the clergy. “What made a lot of people against it was that it was preached from the pulpit.”

One of the most quotable opponents was the Rev. F.R. Johnson of the United Pentecostal Church in the nearby town of Hennepin: “No good has ever come from a dance. If you have a dance somebody will crash it and they’ll be looking for only two things – women and booze. When boys and girls hold each other, they get sexually aroused. You can believe what you want, but one thing leads to another.”

The question of allowing a prom was brought before Elmore City’s five-member school board, and the vote came back 2-2. Board president, rancher Raymond Lee (father of Mary Ann Temple-Lee) broke the tie with words that had been a long time coming: “Let ’em dance.”

The event made front page news from New York to China, including a feature in People magazine. The story caught the eye of Dean Pitchford, who was about to win the Academy Award and Golden Globe for best original song for writing the title track from “Fame.” He drafted a script and lyrics built around a big-city teen reluctantly transplanted to a small town that had banned music and dancing.

To infuse the project with realism, he flew to Oklahoma City, rented a car, and drove to Ardmore and Elmore City. He stayed for a week, talking to Oklahomans about their lives. Upon his return to Los Angeles, he tweaked the dialogue, filling the story with details. The curious name of Ren – portrayed by Kevin Bacon in the movie – is an amalgam of the first names of prom organizers and junior class officers Rex Kennedy and Leonard Coffee.

The working title of “Cheek to Cheek” was changed to “Footloose” and the movie was filmed in and around Provo, Utah, for $8 million, and earned back more than 10 times that amount.

None of the money made it back to Elmore City, but some of the fame rubbed off.

In 2010, the town made national headlines again when it re-created the famous prom on its 30th anniversary. The next year, it hosted its first Footloose Festival. Hennessey’s 40-student show choir recreated the movie’s climactic dance finale on Main Street in 2012, complete with choreography, a smoke machine, vintage prom attire and a confetti cannon. In 2013, dancers in garb ranging from camo to pink tutus did the Elmore City version of the Harlem Shake.

At this year’s Footloose Festival, the pancake breakfast and 5K run was followed by a car show and crowning of the 2015 Footloose Festival Queen. Vying for the title were six contestants, including two-year-old Maci Wilkerson, whose favorite activity was listed as “likes to fight.” Seventeen-year-olds Micah Hicks and Savannah Lee were the oldest participants. Lee’s interests include “hanging out with her friends and family, playing with her animals and art.” Hicks’ sentence-long bio concludes with “hobbies include sleeping.”

Lee was crowned and changed out of her glittery silver contest dress into a mini-skirt and pink Elmore City T-shirt to wander among the hot dog-eating and pie-eating contests, lawnmower races and contests for best chicken dance, electric slide, line dance, wobble dance, cupid shuffle and twist.

Not a bump or grind was seen. Parents danced with children, little girls ran around with hula hoops and teenaged boys stood awkwardly around the perimeter of the makeshift dance floor. The date for the 2016 festival was set for April 23.

And they do, on the street and into the night.

Tales of Fallen Girls, Snake Stomps and the Ban That Didn’t Exist

Its immortalization in “Footloose” made Elmore City’s prohibition the most famous dance ban in Oklahoma. But it was not the only town making headlines as prom prohibition came to an end: at least four other Oklahoma towns made national headlines when they lifted dancing bans.

For 66 years, dancing was not allowed in the town of Ames. Change came in 1987, after arguments that pitted neighbor against neighbor.

At the time, Ames had five Protestant denominations in a town of 312, and 15 seniors in the graduating class. A petition to the school board asserted that “dancing, drugs, alcohol and sex go hand in hand.” Fred Detrick, an 82-year-old resident, took out paid advertisements warning that “Three-fourths of the fallen girls in America attribute the beginning of their ruin to dancing.”

Others, including many parents, disagreed, citing fears of unsupervised parties and drunk driving. Ruby Peck, owner of the Ames Cafe and mother of senior Johnny Peck, told The New York Times that after most graduations “the kids would have a banquet and then come racing down Main Street. I’d rather see them dancing.”

After a rowdy dance at the 1974 Watermelon Festival, the citizens of Rush Springs voted 266-181 to revive a 1919 ordinance against public dancing – and to expand the ban to include private dancing as well.

Arguing for the prohibition, Darrell Haynes, president of Citizens for a Better Rush Springs, said it was not the dancing itself that is objectionable, but rather “the bad environment it creates,” which would foster a “drug culture” that would “degenerate the morals of our youth.”

A national news story the next year noted that City Judge William Pilgrim planned on taking off on the day of a high school dance, which was to be held in a private home within the city limits. “Doggone it. I used to enjoy dancing and I reckon I know how these kids feel. I’m the judge here and I’m not about to fine anybody if they want to cut a rug or two in private.”

In September 1991, after being presented with a petition spearheaded by 80-year-old Gertrude Sweeny, the town council voted 4-1 to repeal the ban. Jim Rennaker, Rush Springs council member, said of the ban at the time: “I guess they were under the impression it would solve the community problems. But a lot of people considered it petty, small-minded foolishness.”

Three days after the ban was lifted, 200 people showed up on a Thursday night for dancing in the streets. A reporter interviewed City Clerk Joyce Knapp as she danced with her husband, Gene: “I’m out of breath! You can tell it’s been 17 years.” She added, with a smile: “This is kind of fun.”

The story goes that the deed for the land where Okfuskee County’s Graham High School stood specified a ban on dancing. Generations of students passed through its doors, with nary a prom or homecoming dance.

Fifteen years ago, a group of juniors petitioned to hold a prom. The idea was backed by the teachers and leadership of local churches.

Graham Superintendent Dusty Chancey located the original deed to look for a loophole — and discovered there was no ban after all. Never had been.

So on April 7, 2000, for the first time in its 85-year history, the Graham High gym was decorated for a dance. All but one of the 25 members of the junior and senior classes attended, as did some of the alumni who never had the opportunity to experience the rite of passage. Among them was Debbie Puckett, Class of 1971, who sat in the gym bleachers wearing a new dress and new hairdo, smiling as she watched her two daughters dance with their classmates: “I have never been to a dance in my life. I don’t even know how to dance. I’m about as excited as the kids. I’m finally getting my prom.”

At the height of the disco craze, a dance was planned for the old J.C. Penney building on Main Street in Henryetta, a city of 6,000 or so. Detractors fought back, uncovering a 1957 ordinance that banned public dancing.

The gauntlet was thrown on September 16, 1978, when 700 revelers protested with dance. NBC’s national newscast summarized the scene: “Despite a local ban against dancing, Henryetta residents move to the disco beat … and 82-year-old Mary Davis joins the gyrating group. City Manager Chester Sims arrives to view the makeshift disco.”

Wittman as saying “whoever wants to show up will stomp snakes in time to the music,” adding that the event was B.Y.O.S. – Bring Your Own Snake. His attorney, Tom Stringer Jr., called the event “an obvious satire on this silly dance ordinance. It’s not a dance. It’s a snake stomp.”

Wittman was arrested at the stomp, although charges eventually were dropped. There is no record of the number of snakes that made it into town.

Henryetta’s dancing ban was lifted in 1979, and the law changed to prohibit dances within 500 feet of a church or school.

So is it still illegal to dance in Henryetta?

A call to the Chamber of Commerce refers me to a compliance officer at city hall, who pauses and snorts: “Dancing ordinances? I couldn’t care less. That’s the dumbest thing I ever heard of.”

He suggests the Henryetta police department might know more. But the officer is stumped. “I gotta be honest, I’m not asked that question a lot. I have no idea.”