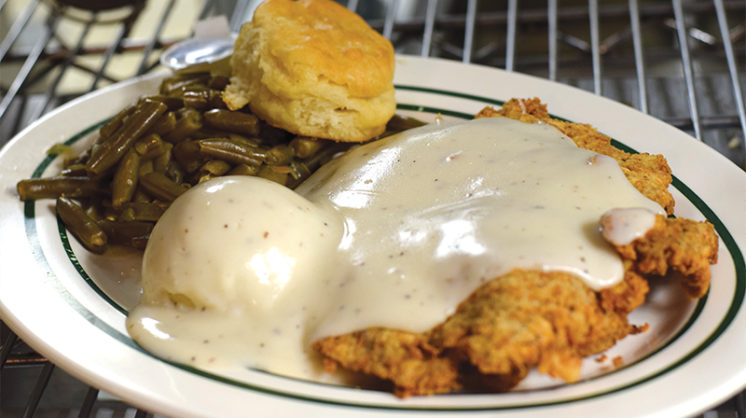 “The idea for a ‘destination dining’ type restaurant first occurred to me when we opened Papa’s Little Italy,” says Donnie Samara, now owner of The Boundary on 66. “We were located off of I-35, south of Frontier City, and people said we were crazy but my former father-in-law and I knew that the place was going to make it.”

Despite doubts, Papa’s Little Italy remained one of the premier dining destinations for folks from all over the metro area for years – and Samara has indeed built a career on destination dining. His current barbeque restaurant, The Boundary on 66, is located between Luther and Arcadia on, as the name says, Route 66. Despite being 10 miles from Edmond and almost 30 from downtown OKC, the business enjoys an endless string of loyal customers, most of whom travel more than a dozen miles for some smoked meat and good company.

When it comes to the idea of destination dining in Oklahoma, Samara is not alone. For many occasions, be it a birthday, anniversary or just another Saturday, Oklahoma City residents have turned special meals into mini-road trips all over the Sooner state. “Destination dining works because people like to seek out something that they can’t have every day,” Samara says. “It makes it special.”

Whether driving to Okarche for fried chicken or cruising down I-44 to hike the Wichita Wildlife Refuge, followed by a burger at the Meers Store and Restaurant, the state is filled in all directions with small-town dining experiences well worth the drive.

“You’ve gotta have good food, and it’s got to be hot when you serve it,” says Samara, whose restaurant is actually a restored filling station. “It can’t just be because you’re in a nice old building with a bunch of neat things to look at. The food has to be good, and every once in a while, you’ve got to have something new on the menu.” With rotating specials such as smoked salmon and outstanding barbeque, The Boundary certainly meets that requirement.

While there are dozens of restaurants worthy of the “Oklahoma Destination Dining” designation, here are some of our most treasured off-the-beaten-path spots across the state.

What to eat
Free cinnamon rolls. That’s right. Free. Cinnamon. Rolls. At the end of every meal at Kendall’s, each guest receives a free cinnamon roll. Not only is it free, it also happens to be one of the best cinnamon rolls in the 405, if not the state of Oklahoma. As if free world-renowned dessert weren’t enough to warrant a 30-mile jaunt down south, Kendall’s is also an easy frontrunner for best chicken fried steak. Equal parts daunting (it’s huge) and delightful, from the breading to the tender meat and thick gravy, the chicken fried steak at Kendall’s sets a high bar. And speaking of “fried and delicious,” the fried catfish is out of this world.

What makes it special
Although Kendall’s food is of rock-star status in terms of execution, its décor is a tribute to the rock stars of Oklahoma. What started as a tiny, single-room restaurant has grown into three rooms each covered from floor to ceiling with signed guitars, concert posters and other musical memorabilia. All of it, from a Jimi Hendrix concert poster to a signed picture of Carrie Underwood, links back to Oklahoma. Although 30 miles from Oklahoma City, Kendall’s is an easy 10-minute drive from Norman. And while there is always a line for a table on the weekends, downtown Noble is far less chaotic a place to eat before or after an OU game than Campus Corner. And don’t forget: It’s cash-only!

What to eat
Okarche’s famed Eischen’s Bar has been featured in countless national magazines, as well as on The Food Network’s “Diners, Drive-Ins and Dives.” It has a killer Frito chili pie and top-rate sandwiches, but there is one dish on the menu that makes Eischen’s customers sing: the whole Fried Chicken. Best served with a side of okra fried to perfection and a slice of plain white bread, it’s the stuff of legend, and large enough that you’ll likely enjoy leftover chicken for lunch the next day.

What makes it special
Kids love its throwback arcade games, but Eischen’s history is what makes this Oklahoma gem special beyond its fried birds. The eatery originally was opened as a bar before statehood in 1896, making it the oldest bar in Oklahoma. The back bar itself, which was carved in Spain in the early 1800s, was incorporated into Eischen’s eclectic interior in 1950. In 1993, Eischen’s burned down, but a section of that bar was among the few surviving items and remains today.

What to eat
Walk into Stables and not only are you immediately overwhelmed by the mouthwatering smell of grilled meat, but your eye likely will wander to a case of beautiful fresh-made pies, which all but whisper “save room for dessert.” While most restaurants have a single specialty, Stables offers so many top-tier sides and entrees that to assign such a title as “house specialty” to any single dish is an exercise in futility. That said, no meal – whether it be the perfectly cooked ribeye or a plate of Texas-style barbeque – would be complete without an order of Stables’ fried onion strings to go on the side. The aforementioned pies, whether chocolate or key lime, are equal parts light and rich in flavor, and if you’ve got space in your stomach to try more than one flavor, do it.

What makes it special
Downtown Guthrie has skyrocketed to one of the state’s most recognizable main streets, and Stables Café is at the heart of it all. While the menu’s diversity and the staff’s good cheer are what define this establishment, the restaurant’s layout certainly adds to its appeal. Stables is divided into two distinct restaurants using the same menu. On one side, old, polished gas pumps, antique bicycles, vintage Coke signs and a playful, western vintage aesthetic offer a more casual, family-friendly vibe. On the other side of the building is Taproom 223. With 22 beers on tap, this well-appointed brick and mortar room is to casual sophistication what the front of the house is to time-gone-by.

What to eat
Every now and then, you hear someone say they’ve found the world’s best chips and salsa. Unless they are talking about Enrique’s, which is located in Ponca City Regional Airport of all places, they are wrong. Enrique’s corn tortilla chips are unlike anything you’ve ever had. With the initial crunch of a chip and a soft tortilla-like finish, the chips came about as a mistake years ago when one busy day, Enrique pulled his homemade corn tortillas from the fryer a few moments too early and served them anyway, much to his customers’ delight. Soon, people from all over were lining up to munch on the fortuitous accident. For the brave, Enrique also offers the Texas Hot and Spicy burrito. This carne asada burrito smothered in jalapeño gravy and topped with a grilled jalapeño is guaranteed to light your mouth on fire in the best possible way.

What makes it special
It is hard not to talk about Enrique’s without mentioning the chips, and more challenging without talking about the location. Few outside Ponca City know that the town of 25,000 even has an airport at all, and stranger still is the fact that two-thirds of that airport is made up of one of the state’s best Mexican restaurants. As they eat, diners get to watch small prop planes coming and going into the little municipal facility. So while it may take a little longer to reach by car than some of the restaurants on this list, if you’ve got a friend with a Cessna, you can be there in a matter of minutes!

What to eat
Fine Italian dining generally is not associated with Midwestern towns with populations fewer than 5,000. Giuseppe’s Italian Dining in downtown Marlow proves such a generalization wrong. Giuseppe’s blend of innovation and traditional Italian dishes make for an extraordinary dining experience well worth the gas to get there. For starters is the Italian Chips and Salsa, a crowd-pleaser made up of pasta chips smothered in Alfredo sauce (a house specialty on its own), mozzarella, chicken and diced pepperon-cini. The Straw and Hay from the entrees section is also a must-have. This heavy pasta dish features regular and spinach pasta smothered (once again) in Alfredo sauce and covered in peas, mushrooms and diced ham. Also, the lasagna is the dish upon which the restaurant was built. On the dessert side, if you’ve ever traveled to Italy and enjoyed a tiramisu, the made-from-scratch version from Giuseppe’s will take you right back to Roma.

What makes it special
Giuseppe’s spans two rooms with beautiful brick-and-mortar walls and high ceilings, but what makes this restaurant truly memorable is its history. Giuseppe’s originally was a bank built in 1911. It has long since been a restaurant, but the bank’s name still remains etched above the name of the current occupant outside the building, and the bank’s prominent vault now serves as the restaurant’s quite well-stocked wine cellar.

What to eat
You can hardly throw a rock – or a hamburger patty – around here without having it land somewhere close to a restaurant that lays claim to the best burger in Oklahoma. So prevalent are tasty burgers, one could argue that a suitable replacement slogan for the Sooner State might be “Hamburgerland.” And while it is true that the streets of many Oklahoma cities and small towns are (metaphorically) paved with beef and grilled onions, no burger, nor eatery, quite compares to what you’ll find in Meers. With a thin patty and a diameter of an impressive seven inches, Meers burgers are made from extremely lean, locally raised, grass-fed longhorn ground beef procured from the owner’s family ranch.

What makes it special
While a trip to Meers is worth it for the burger alone, there are few tourist experiences in Oklahoma that can rival a visit to the roaming buffalo herds and prairie dog towns of the Wichita Wildlife Refuge, one of the state’s most popular destinations. Visitors can work up an appetite exploring a local trail or climbing Mount Scott for a sweeping 360-degree view of the state before heading to Meers – located just 15 minutes away – for a well-earned burger and a cold local brew.

What to eat
This nondescript steakhouse located on Pawhuska’s Main Street isn’t fancy-looking, but serves some damn fancy steaks. Whether the ribeye, the chicken fry or the bacon-wrapped filet, there is no better place to get a steak than from Grill 125. For starters, the fried cheese curds are the way to go, and for the brave, Grill 125 serves up calf fries – and while I’m not brave enough myself, the word is that they are delicious.

What makes it special
Pawhuska is to good steak what the coast of Baja, California, is to fresh fish. With its proximity to the Pioneer Woman’s famed Drummond cattle ranch, the Tallgrass Prairie and some of the best cattle grazing in the world, it seems only appropriate that one might be able to find a good steak in a cow town like Pawhuska. To do so, look no further than Grill 125. This is where real cowboys go to eat real steak, and if you’re in the mood for a cold beer, they’ve got that, too.