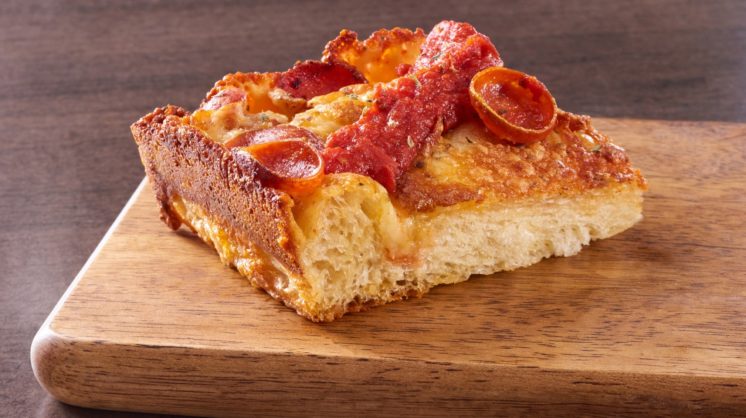 “My experience is that you never plan a second location until you’re overwhelmed with the success of the first, and we’ve only been here for a couple weeks or so,” Warfield said. He got is start in restaurants in 1986, and his resume includes time with Darden, Bahama Breeze and Rock Bottom Restaurant and Brewery, where he learned about all things beer.

Warfield’s experience with Detroit pizza goes all the way back to when he lived in Ann Arbor and ate at Buddy’s Rendezvous, the wellspring of the style since 1946. “We didn’t really see the style trending around the country until 2012, though,” he said.

Rendezvous Pizza’s menu is intentionally small for now, with two styles of pizza, including daily slices (and squares), wings, garlic bread, meatballs, and salads. Guests can add grilled chicken or steak to the salads. The pizza is delicious, but the wings are likely to be the main reason people return. They are among the very best in OKC. Smoked and grilled, for exceptional flavor and texture, the wings are smoked over cherrywood soaked in Coca-Cola (so the wood doesn’t go “ashy” and ruin the product).

“The skin on a wing should snap,” Warfield said. “If it doesn’t, the inside is going to be mushy.”

The wings at Rendezvous definitely snap, and they’re best served dry. Seriously, try them dry first. The hot buffalo sauce is deeply flavorful with the perfect heat level, and the Korean BBQ is a must try. In terms of sauces, the vodka sauce on the meatballs might be the best one in the building, but guests will also love the peanut butter and jalapeňo jelly sauce.

“You can buy customers with aesthetics,” Warfield said, “but to get them back, to be competitive, you have to have good food. The restaurant business is a three-legged stool: food, atmosphere and real estate. You can overcome the last two with great food.”

To get the New York pizza right, Warfield had to get the most common cheese blend used in New York in Oklahoma. It wasn’t available until Rendezvous ordered it. “We make the dough fresh daily, because the crust has to be right. For the Detroit, we used olive oil and drawn butter on the pans, because that gives the crust the buttery flavor, crunchiness and texture you want from Detroit pizza.”

Yes, they’re taking pizza seriously, and it’s paid off. The ingredients include cupping pepperonis, ham from Schwab’s, pepperoni and sausage from Fontanini, and Wisconsin brick cheese. Quality ingredients lead to a quality pie, and the commitment shows in all the pizzas. The cheese is always the indicator of how good a pizza joint can be, and their cheese pizza — both styles — is delicious. You can also get the vodka sauce on a spicy soppressata pizza, or just go full carnivore with the Motown Meat.

The bar focus is American macrobrews, or as Warfield puts it, “Cold beer. Cheap.” That means you can expect Budweiser, Coors, Miller — the usual suspects — as well as some more regional offerings. “Phase 1 is beer in an iced mug,” Warfield said. “Phase 2 will be pitchers on the tables.” There are two wines on tap and a full back bar as well.