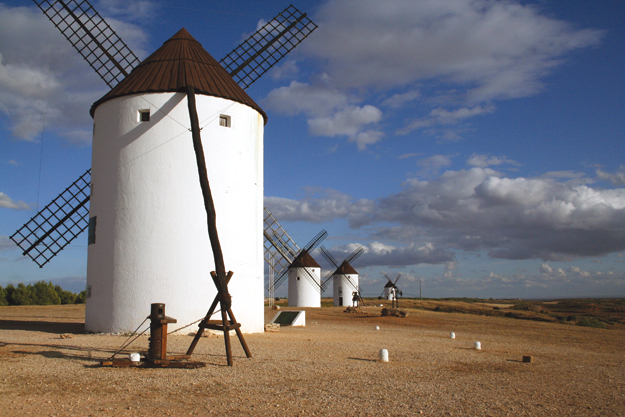 Don Quixote is frequently cited as “the first modern novel.” I hadn’t read it when I was invited to explore the Spain of Don Quixote, so I thought I’d better do some catching up. The magnum opus of Miguel de Cervantes was published in two parts – the first in 1605, the second in 1615. Written in an age devoid of instant entertainment, the book is looooong – weighing enough that I decided to read it on my Kindle. I had barely made inroads into the text when my trip began…

Alcalá, a UNESCO World Heritage Site, is the birthplace of Miguel de Cervantes y Saavedra (1547-1616) and visitors can tour the simple, two-story house where he was born. Although not furnished with any of the Cervantes family’s furniture, the house is decorated in 16th-century style.

Once you’ve made this obligatory stop, just enjoy the city. Wander down narrow streets and through the central plaza. Stop by the Archbishop’s Palace where the “Catholic Kings,” the soubriquet for King Ferdinand and Queen Isabella, met with Columbus. Be sure and look up for the storks which make huge, messy nests on rooftops and chimneypots.

Our accommodations on this press trip were in a variety of paradores, government-owned accommodations noted for historic significance or locations of great beauty. The parador in Alcalá incorporates a 17th-century convent into a 21st-century facility complete with high-tech electronics and a super spa.

Each parador restaurant highlights local favorite foods and traditions. National favorites like paella, gazpacho and migas have regional variations, but each distinct area has dishes particularly associated with them. Here it was a wonderful almond custard and puff pastry dessert called “costrada.”

Breakfasts at the paradores were typically elaborate buffets with cheeses, meats, hot dishes, pastries, fruits, even salads and desserts – and every one had a variation of paté – sometimes on bread like a little sandwich, other times, simply a scoop on a spoon. It was a guilty pleasure I anticipated daily.

The Book and the Author

Throughout his life, Cervantes struggled to make a living. He served in the army, was captured by pirates, worked as a civil servant collecting provisions for the Spanish Armada and collected taxes. He was imprisoned several times and is thought to have started Don Quixote during one of these enforced sojourns.

Many believe that it was while being jailed (actually locked in a wine cellar!) in Argamasilla de Alba that Cervantes began his magnum opus. In this town, there was an unfortunate nobleman who, in 1601, suffering from mental disabilities, donated a painting to the local church in hopes that the Virgin Mary would cure him. It is thought that Cervantes, inspired by the story and the inscription on the painting, created his main character in a similar vein.

Don Quixote, his brain addled by reading too many stories of chivalry, fancies himself a knight and rides out searching for adventures which he will dedicate to “his lady,” Dulcinea del Toboso, another figment of his imagination.

Cervantes was rarely specific about locations in his book. He describes Don Quixote as being from “a village of La Mancha, the name of which I have no desire to call to mind.” He neither confirmed nor denied guesses about specifics, leaving towns in the area to make their own claims to fame.

Several of the book’s scenes take place at inns and Puerto Lápice’s Venta la Quijote, built in the 15th century, could easily have been one visited by Cervantes. The original well stands in the spacious courtyard. The walls are brightly whitewashed with brilliant blue trim. The roof tiles sport mossy beards and inside, giant pottery jugs hold enough wine for many merry evenings.

Perhaps no image is so widely known as that of Don Quixote attacking windmills, thinking they are giants. We stopped at two different spots to see the historic structures, built between the 15th and 18th centuries. The sails are still now – these mechanical wonders having been supplanted by modern milling machines. But on special occasions, the sail frames are recovered with cloth and the giant arms swing in the wind.

Don Quixote, believing he’s under an enchantment, often mistakes humble hovels for princely palaces, but he wouldn’t have had to go far to see the real thing. La Mancha, a huge plain, offers few geographic surprises – but occasionally it delivers a blockbuster. We had been driving through flat, sere fields when our driver turned off the main road and took a secondary track. Pulling off at a lookout spot, we were presented with a view of Alarcón, a medieval walled city and castle worthy of any fairy tale.

The castle, originally built by the Muslims in the eighth century, has been restored and is now the Parador de Alarcón. The regional dishes here still retain Moorish influence with eggplant being a favorite vegetable. Among the specialties we tried were eggplant fritters with Alcarria honey and lamb, saffron and rosemary stew with cauliflower cous cous.

Consuegra provided a double dose of pleasure – a castle and windmills. The 11 “molinos,” pristine white cylinders with black conical caps, each have names, including Sancho, Bolero and Mambrino. They stand close to a ruined 12th-century castle that is undergoing restoration.

Don Quixote or not, you can’t mention La Mancha without talking about the cheese. The regional specialty is Queso Manchego – cheese made from the milk of Manchega sheep within the designated area of La Mancha. Like Champagne – if it ain’t from there, you can’t call it that!

I can’t say enough about the food of La Mancha. I tried things I never thought I’d try – like morteruelo conquense (every meat but the kitchen sink: ham, rabbit, pig liver, partridge and more) and cheese ice cream (it was great)! The accommodations were first class; every one was different – from the parador in Cuenca which overlooked a yawning gorge to the parador in Toledo with its panoramic view of the ancient city.

I saw so many wonderful sights; it would take a book to include them all. Perhaps that’s why Cervantes wrote such a massive tome. I hope to go back to Spain again someday to see more of this wonderful country – and maybe I will have finished Don Quixote by then.