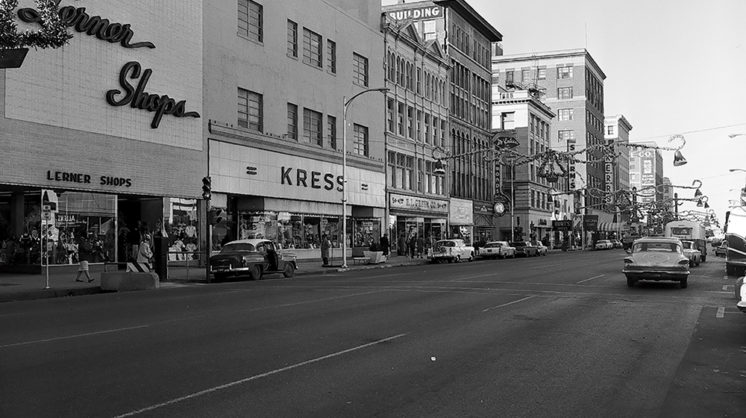 Christmases past are fun to remember, and so are the decorations, music and memories of the times in which we lived. One of Oklahoma’s favorite sons is civic leader Lee Allan Smith, known to many as “Mr. Oklahoma City.” He recalls the particular joys of the season from a generation or two ago. It was a time before massive malls and ordering Christmas gifts online; a time of silver bells and carolers and shoppers rushing home with their treasures.

“When I was a little boy at Christmas, my mother would take me downtown to John A. Brown’s,” Smith says. “That was the only place you could see Santa Claus – and Brown’s was great. Their toy section was on the same floor as Santa. My favorite gift he ever gave me was a toy train; I kept that in my mind forever.”

Stores such as John A. Brown are a distant memory now, he said. In fact, downtown in those days was quite different.

“I remember Halliburton’s Department Store,” Smith says. “There was Park’s Clothiers, the old Katz Drug Store, the Criterion Theater. My mother took me to Rothschild’s B & M – it was the precursor to Rothschild’s, and the ‘B & M’ meant ‘Boys and Men.’ All the storefronts were decorated for Christmas. It wasn’t exactly like the storefronts you might see in New York City, but we would always go downtown to look at all the sights and hear the sounds of the season.”

The OKC Police Department was on horseback then, he said, which allowed them to move through traffic more easily. They were very well-respected, and at Christmas, their barbershop quartet would often perform.

“It was called ‘The Flat-Foot Four,’” Smith says with a laugh. “They would perform Christmas carols, and downtown shoppers always enjoyed that. It was bustling down there all the time.”
Decorations were much simpler, too. Greenery was draped across city streets, with sparkly dangling silver bells, and there were plenty of tinsel-covered Christmas trees. Strings of street lights, even stop lights, blinked a bright red and green … you could practically hear Bing Crosby crooning.

Eventually, however, shopping centers such as Penn Square and Shepherd Mall came along, and many of the favorite old downtown stores closed. By the 1970s and ’80s, downtown OKC had mostly become a mercantile ghost town. A resurgence began in the ’90s, and today, the downtown area is once again a hub of Christmas activity.

“I thought we had a great, fun, friendly city back then,” Smith says. “And we have a great city now. Times and people change, Oklahoma City has changed. But the magic of Christmas is timeless.”