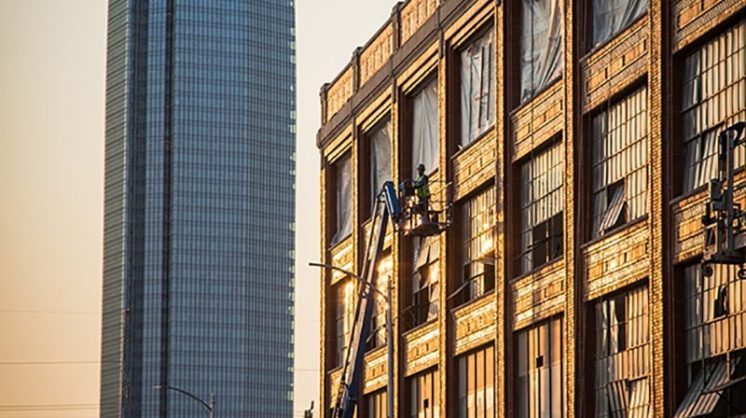 The next phase of Oklahoma City’s transformation is taking shape on the western edge of Downtown.

A.J. takes a deep drag from his cigarette and then exhales a puff of smoke as he contemplates which direction he will head next. Homeless for a few years and in Oklahoma City for the last seven months, A.J., who declined to share his last name, said he wanders stretches of Classen Boulevard most of the day, stopping at a nearby McDonald’s when he has enough change to order a drink or a burger.

On this day, he is hanging out with a group of other homeless men, some of whom are waiting for their next meal at the City Rescue Mission one block away.

“For those of us who are [homeless], this is our part of the city,” says A.J. before taking another puff of his cigarette. “Just look around.”

A quick look around this mostly industrial neighborhood west of downtown does show a large amount of homeless men and women; some enjoying shade under a tree in the median of Classen Boulevard, a few others panhandling from cars stopped at a traffic light. 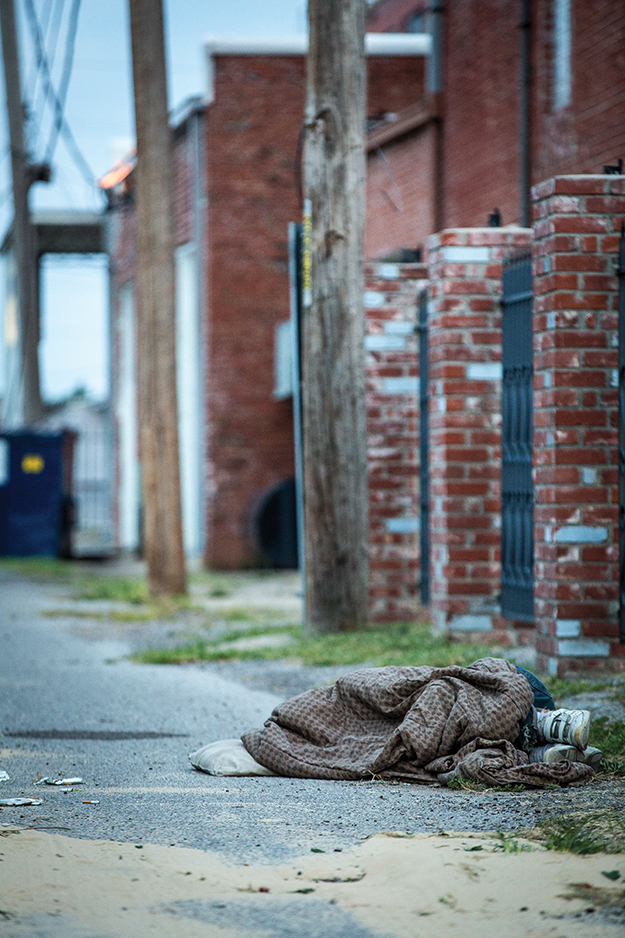 West downtown has been a hub of homeless activity for many years, including a time when the former Interstate 40 was left abandoned while the city waited for a new stretch of highway to be completed several blocks to the south.

“For a while [the state] left the old I-40 up and it became a long, skinny homeless camp until it was taken down,” says Dan Straughan, executive director of the Homeless Alliance.

The overpass is now gone, leaving patches of undeveloped land in its wake that will someday soon become the path of a new downtown boulevard. Some of those open patches have become daytime hangouts for people like A.J.

But just a block away from this makeshift community of the city’s most challenged residents, there is a stretch of trendy shops, a pizzeria and bakery, which signal a coming wave of development that has many city leaders looking at west downtown as the logical place for Oklahoma City’s next chapter of urban expansion and redevelopment. 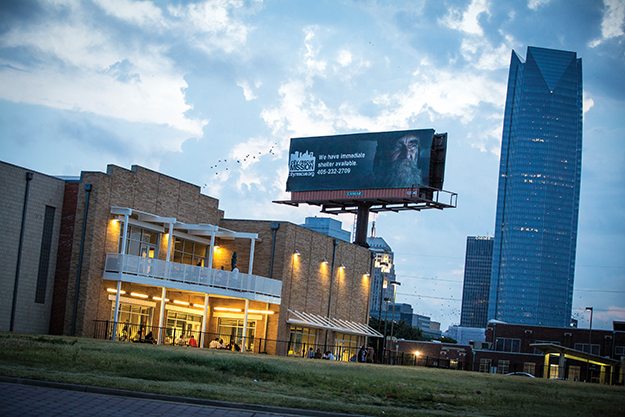 Just as Bricktown once stood as a cluster of empty or underutilized warehouses, the district west of downtown provides the perfect Before picture to compare with an eventual After that will include plush hotels, high-end housing and an identity that places it on the local map of lively business and entertainment districts.

Modern urban life includes elaborate wealth and development colliding with extreme poverty and decay. But in Oklahoma City, that collision is most visible in the blocks west of downtown, at least for the next few years before this urban district completes its renaissance.

“I’ve been in Oklahoma City for six and a half years, and even when I first got here it was obvious that the west side [of downtown] was the next frontier for the city,” says Jane Jenkins, president of Downtown OKC Inc.

Downtown’s entertainment sectors are located on the east side in Bricktown, while Deep Deuce, just north of Bricktown, has been ground zero for downtown’s housing boom over the past decade. Midtown has seen the addition of new restaurants, such as R&J Lounge and Supper Club and the Bleu Garten food truck park, while the central business district, home to the 3-year-old Devon Energy Tower, has also seen an influx of new life in recent years that has made Oklahoma City a poster child for downtown revival in 21st century America. 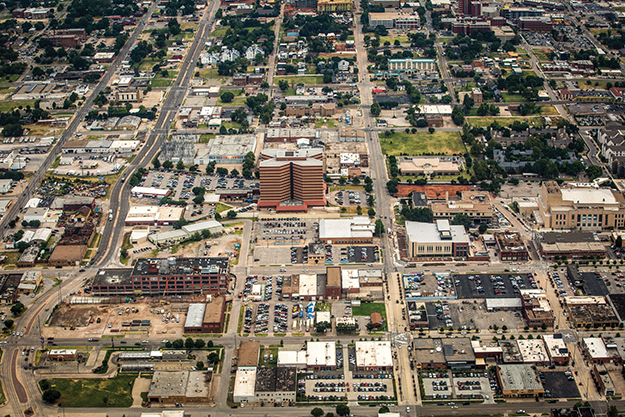 In the years to come, these distinct parts of downtown will be connected with a modern streetcar system that city leaders hope will bring even more development.

But while Bricktown and Deep Deuce can pause to celebrate decades of growth, the blocks west of Walker feel more like a blank canvas that is next in line for an injection of civic and private development.

A new school (John Rex Elementary), Film Row and the removal of an elevated portion of I-40 already have given the west side of downtown noticeable changes. Even more alterations are on the way with a new hotel and art museum, for-sale housing, the new downtown boulevard and other infill projects that will connect the city’s central business district with its Classen border. 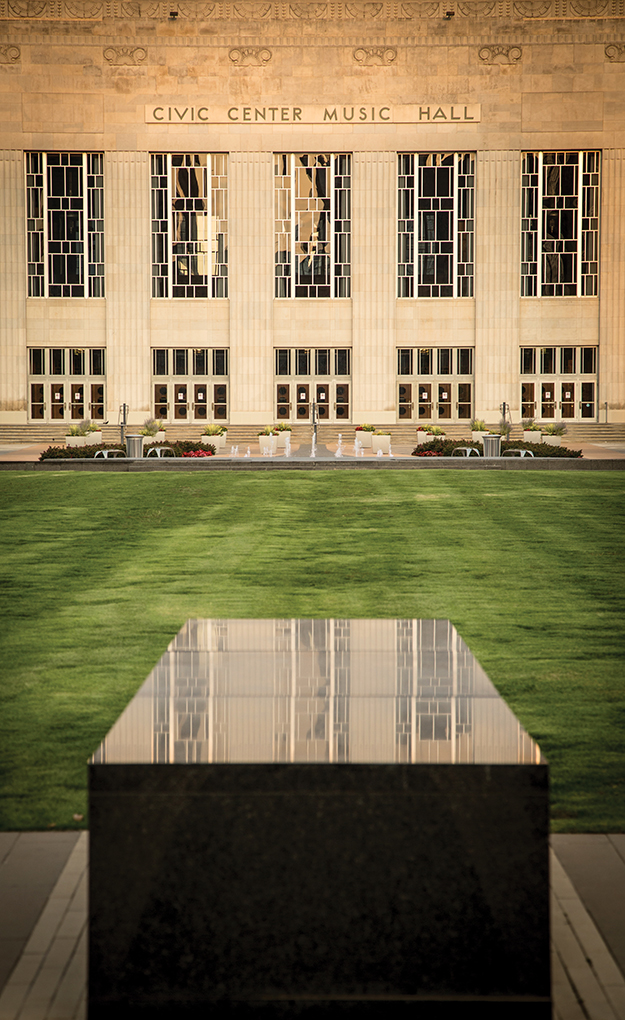 “With the rest of the city not changing … [during] the Great Depression,” historian Bob Blackburn said during a presentation at City Hall last year, “the only major changes in the 1930s in Oklahoma City was [City Hall], the county courthouse and the municipal auditorium we now know as Civic Center.”

This development also established a hub of local government facilities that remain today, including the Oklahoma County jail and police station headquarters.

The early 20th century also saw west downtown become a minor hub of film distribution: most every major motion picture company, including Paramount and Universal Films, had set up regional distribution facilities in Oklahoma City. While the city’s Hollywood connection has ended, recent redevelopment in west downtown has resulted in a stretch of businesses along West Sheridan’s Film Row, some of which have preserved icons from the film industry’s past presence.

While Film Row has extended downtown a few blocks west, the next few years are likely to see a new round of investment that could dramatically raise the west side’s profile. The development that many officials view as the new era of west downtown is the 21c Museum Hotel, a high-end boutique hotel that will be located in the former Ford Model T assembly plant at 900 W Main. The 21c chain is already located in four other cities where it anchors up-and-coming arts and entertainment districts: Cincinnati, Durham, N.C., Bentonville, Ark., and Louisville, Ky. Like Oklahoma City, these are cities not traditionally known as bastions of arts and culture but which are making a name for themselves with new urban renewal projects in the 21st century.

The new hotel and museum will also give downtown a direct connection with Classen Boulevard, which is currently buffered from the central business district by abandoned warehouses and vacant lots. 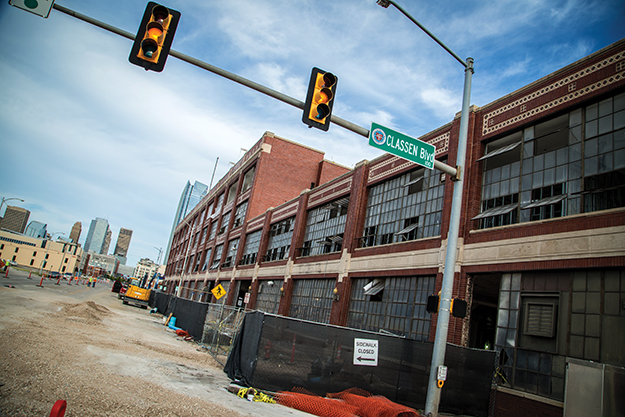 “We really look at one of downtown’s borders as Western Avenue to the west,” Jenkins says. “This development is going to fill us in over there.”

As the neighborhood continues to grow its status as an arts and culture hub, it will also remain a center for civic and law enforcement services as a new Oklahoma City police headquarters and municipal court building are completed in the coming year. The $22.8 million municipal court complex will feature six courtrooms and a walk-up citation payment window, making the process much more efficient, according to Interim Court Administrator Jane Abraham.

“The building was carefully designed with security in mind,” Abraham says about the court facility that is expected to host more than 140,000 hearings a year. “People who simply want to pay a citation will be able to do so much more quickly and conveniently, without all the hassle of going through a screening process.”

While some of downtown’s districts rely on evening entertainment that makes for some fairly inconsistent daytime activity, the growth of the municipal and police facilities will ensure life during the workday that will not only keep streets busy with traffic, but provide a customer base for lunch eateries and other businesses.

“The western edge of downtown is experiencing an exhilarating rebirth,” Oklahoma City Mayor Mick Cornett said earlier this year. “Housing is planned across the street from the new Municipal Courts Building, and the new Police Headquarters, which is located around the corner, is set to open this fall. A few short blocks away in the Film District, the new 21c Hotel is under construction along with housing and other developments.” 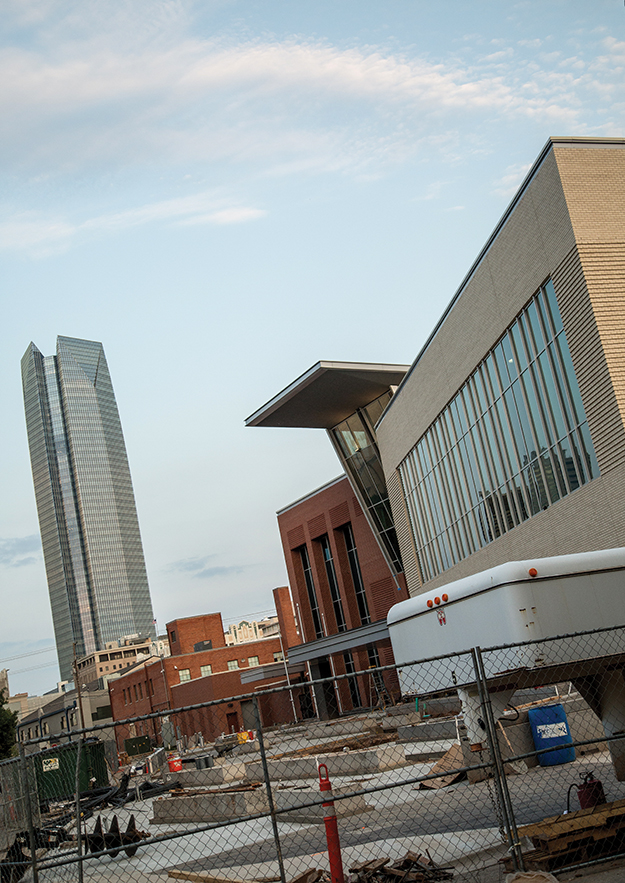 The Civic, at the corner of Couch and Lee, is a proposed 34-condo development that will bring for-sale housing to a downtown that has been dominated by rental units.

“This development will serve as a cornerstone for the neighborhood and will improve walkability in the area,” Cathy O’Connor, president of The Alliance for Economic Development of Oklahoma City, wrote in a July column for The Journal Record. “As the downtown economy grows, the need and demand for permanent housing will continue to increase.”

O’Connor added that for-sale housing will help spur other developments, such as more retail, restaurants and entertainment options. For example, developers recently announced plans for a music venue and restaurant in the space directly south of 21c.

Block by block, Oklahoma City has been rebuilding its urban core and transforming gritty streets into attractive neighborhoods. Its next district transformation could be west downtown.

“We are trying to create many different types of neighborhoods in downtown and many that offer unique personality,” Jenkins says. “We are very pleased with the way [west downtown] has been developing, and it’s exciting to see where it’s headed.”