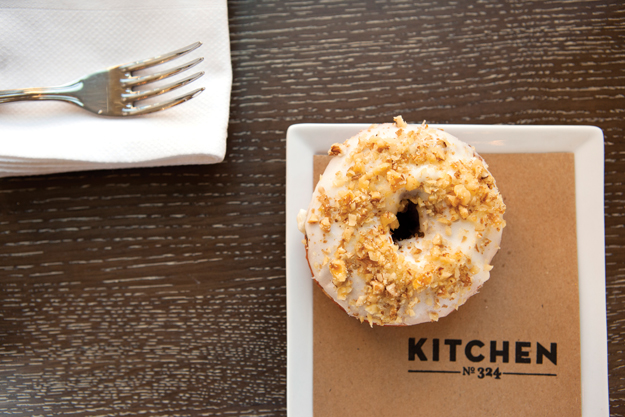 … once they find the place.

One of the restaurant’s biggest drawbacks in its early days is that the ongoing development that’s bringing more people to downtown and making ventures like this one possible is still going on, and street construction – especially on its namesake Robinson Avenue – makes Kitchen No. 324 harder to locate and get to than it should be.

But once inside, it’s beautiful: airy, with loads of natural light and a high ceiling that keeps it feeling spacious even when every seat is filled. The décor of creamy gray tile, plush green banquettes and unadorned tableware strikes a clean balance with the Braniff Building’s vibe: The space feels solid and comfortable simultaneously, and equally welcoming to a group of suits having a breakfast meeting or a lone customer in sweats reading while sipping a glass of freshly pressed pineapple-green-apple-lemon-mint juice. (Yes, that’s a thing – the tartness of the apple and lemon counteracts the pineapple’s sweetness, and the hint of mint adds a surprisingly refreshing aroma and aftertaste.)

The Pastrami & Eggs makes a deliciously savory breakfast, albeit one that has the potential to be a bit messy since the titular ingredients are much easier to cut than the dense, chewy bread that serves as its foundation. Diners hoping to impress their companions and avoid smears of poached egg yolk might be better served by the Smoked Salmon, whose tender namesake is piled on a baked bagel slathered in cream cheese and topped with flavorful piquancy from capers, red onion and salmon roe.

Despite its central location, good food and great atmosphere, the real feather in Kitchen No. 324’s toque is its service – seemingly the entire staff is cheery, helpful without being intrusive and prone to niceties like offering coffee drinkers a fresh cup to go, and greeting patrons placing their order during rushes with a sincere “You’re awesome for waiting.”

It would be a pleasure to try a restaurant concept like this purely based on what it says about the city’s state of development and future trajectory. It’s doubly satisfying to experience the execution and be confident in strongly recommending this new place; it’s great. Totally worth circling the block a few times.