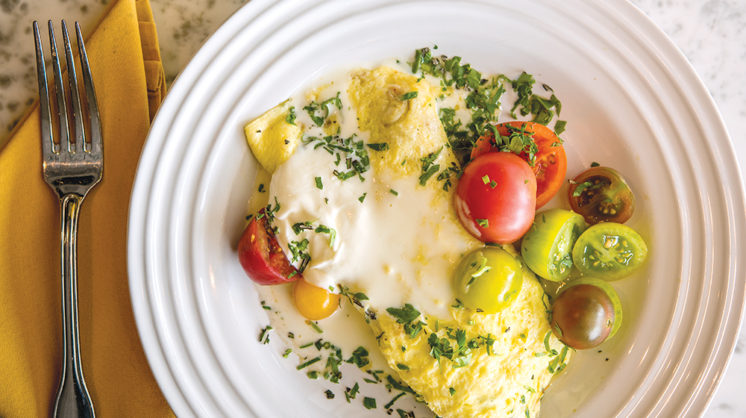 If you’ve never read Peter Mayle’s A Year in Provence, I recommend it – the account of an English couple’s first year of life after moving to the rural French countryside isn’t great literature, but it’s breezy, atmospheric and thoroughly entertaining, and much of Mayle’s attention is on lavish, loving descriptions of the incredible food he encounters at every turn.

I found myself thinking about it a good deal during a visit to En Croute, the spectacular little restaurant tucked into the north side of Nichols Hills Plaza. Its website says the dining experience is “meant to evoke the comfort and leisurely lifestyle the [management] team has enjoyed in the fromageries, cafes and bars in European country villages, but with an American twist.” I will tell you that, whether or not you have a background in continental cafes for mental comparison, En Croute is amply worth a linger.

It’s a classy, comfortably appointed restaurant that makes the most of its limited space, beginning with the golden door that’s the introduction to an elegantly cool color scheme of gold, white, rich navy and paneled wood. All the art is from the personal collections of the owners, including some transcendentalist pieces and framed scarves, and much thought has gone into details from the cozy couch up front to the unobtrusive but supportive chairs. The first sight inside is of the cheese case, presided over by managing partner and cheesemonger Crosby Dyke, who’s happy to make a few selections for sample boards, or the En Croute plate’s combination of cheeses, charcuterie, a baguette and fruit – ours included a stunning Chorizo Iberico alongside Sopressata and pate.

Chef/partner Jonathon Stranger said the plate is actually his favorite of their breakfast options for its versatility and range of tastes, although for a more signature showcase dish, it’s hard not to recommend the Dutch Baby. This immense creation is an unusual texture, almost a combination of pancake and soufflé, slightly sweet and lighter than it looks. Think of it as the Cadillac of pancakes.

“My mother is from Sweden,” says Stranger, “and my grandmother used to make them for Christmas morning. The hard part is doing them in a restaurant; they have to be made to order and served steaming hot.” Because, like the soufflé they resemble, they’re prone to falling quickly. “It’s probably the most popular breakfast appetizer; people just get one for the table and share it.” 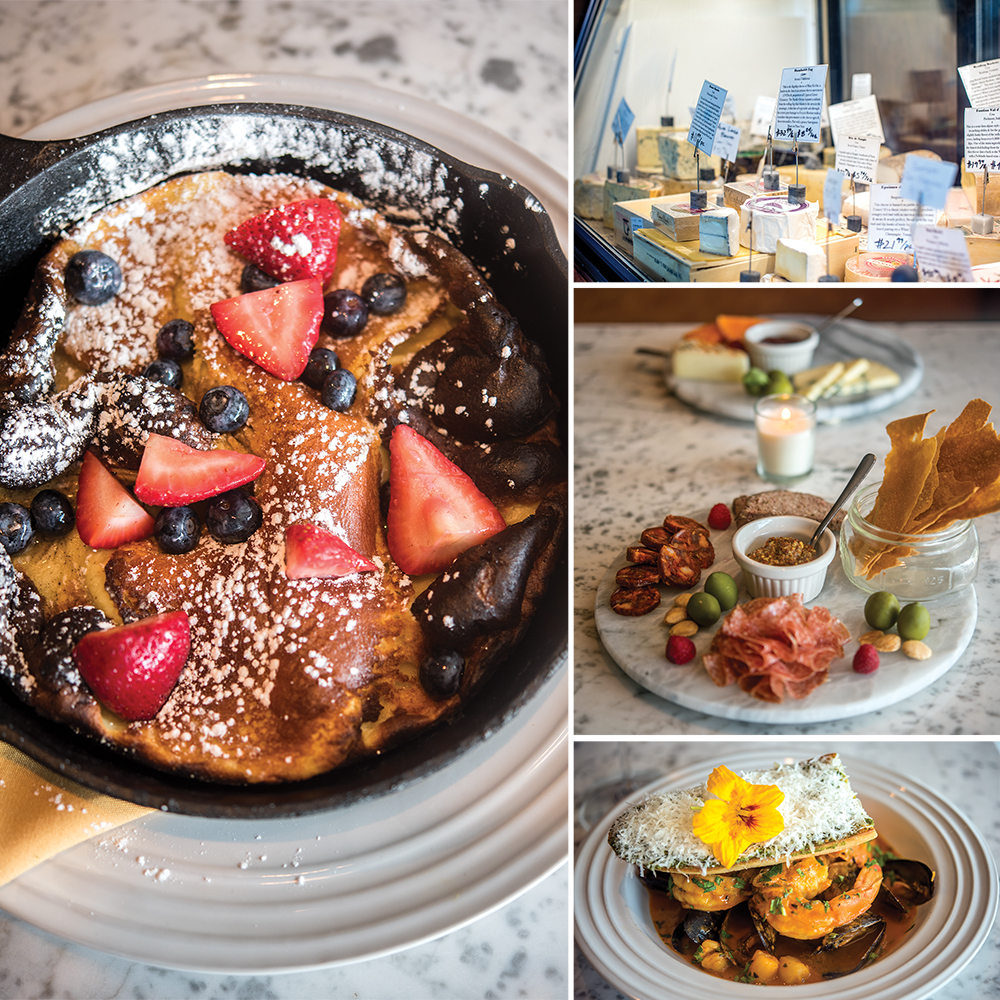 It’s only available on the breakfast and lunch menu, but at any time you can get the Brie Salad – the endive segments are a trifle difficult to engage with, but there’s no arguing with the appeal of a warm slab of brie – or the huge, juicy patty of the house burger, topped with charred onions and a sauce that Stranger describes as kind of a homemade ketchup – it’s deliberately reminiscent of the old Split-T but has notes of blackberry and sorghum instead of just tomato. And for dinner, I wouldn’t begrudge you the short rib or roasted rainbow trout, but I’ll take any opportunity to savor a plate of Cioppino, a rich stew of scallops, shrimp and mussels with a pesto-coated slab of bread for scooping up every delicious drop.

By the way, if you’re looking over the menu and raise an eyebrow at the concept of a Market Price grilled cheese sandwich, that’s deliberate – because it isn’t a set dish, it’s intended to vary day by day to give the chefs and experts a chance to experiment with ingredients and recipes. “It’s a lot of fun, trying a bunch of different combinations,” says Stranger. During our visit, it was Grafton cheddar melted over a perfectly toasted baguette, with a house-made jam that I think was raspberry-based but tingled with just a dab of Fresno pepper. Five stars, would sandwich again.

“I thought I knew a little bit about cheese when I met Crosby,” smiles sommelier Drew Tekell. “I have since retracted that statement.” 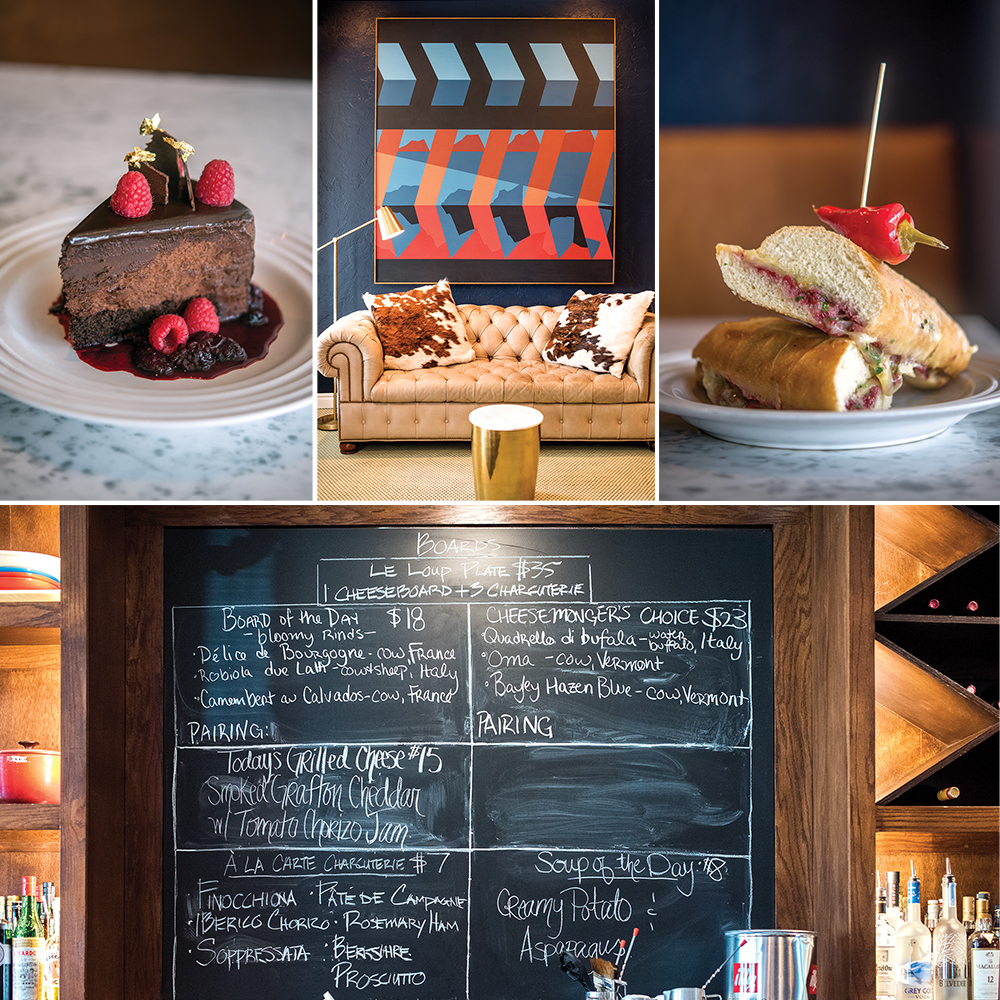 The pastry chef is Chelsea Berry, and dessert should not be optional considering the range – slices of lemon olive oil cake, flaky pain au chocolat, house-made ice cream and a chocolate cake so decadent that I somehow feel as though I owe you, the reader, an apology. Yes, those are flecks of gold leaf on top.

I know July is a season for hot dogs and burgers, but it’s also the perfect time to give your palate a bigger playground. Pate is delicious, exotic cheeses are delicious, and whatever time of day or scope of hunger you’re dealing with, En Croute has something bon for your appetit.

In just a few weeks, En Croute will have a new neighbor with a more meat-centric focus: “St. Mark’s Chop Room is named in honor of my father, who passed away last July,” says Drew Tekell. “We’re using Oklahoma Wagyu beef exclusively, from Ironhorse Ranch near Norman. We’ll have truffle-roasted chicken for two, a couple of seafood options, one or two desserts – it’s gonna be fun, but it’s small, six tables only. We’ll have reservations, but I always want to keep a table or two open when I can.”

The new space starts accepting reservations July 13, and should open Aug. 7-8, after a preliminary test timed to coincide with a memorial family gathering. Stay tuned.