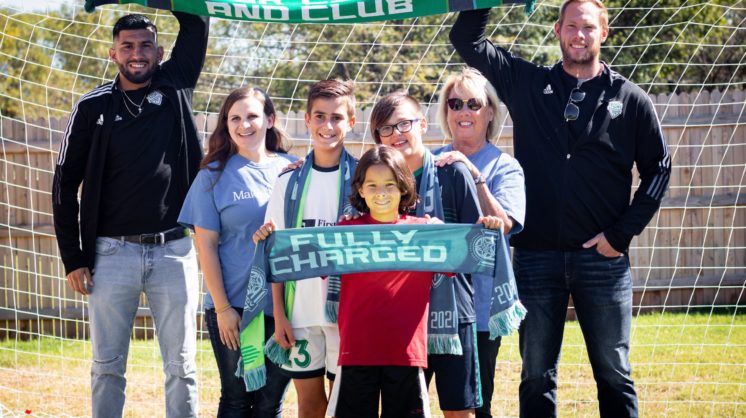 Jude Starkey, a soccer fanatic and fierce survivor of leukemia, was able to see his dreams come true when OKC’s Energy FC teamed up with the Make-A-Wish Foundation of Oklahoma. As a fan of the sport and a talented player, Starkey wanted his own mini-pitch in his backyard. With the help of Energy FC and Make-A-Wish, the Starkey family was able to see their son’s wish turn into a tangible field of excitement.

“Jude dreamed of walking out his back door and having a home soccer field to play and practice on,” said the Starkey family. “He felt excitement and anticipation over the days as it was being built. Once it was done, he was overcome with joy and enthusiasm.” And when it was complete, players from the Energy FC team headed over to the Starkey household to celebrate Jude’s new turf field with him. Already considering him a member of the team, Energy FC took Jude Starkey under its wing, offering him a personalized uniform, locker room tours, and multiple visits from the players.

During his fight against cancer, the Starkeys had to readjust their outlook on day-to-day life. “As a family, we strived to stay positive and be grateful for the small things,” said the Starkey family. “We embraced our ‘new normal’ and tried to stay as active as possible. This kept Jude strong during treatment, as he never quit playing the game he loved.” With the outpouring of support from Energy FC, Jude Starkey’s dream turned into reality. “After every game Jude went to, players would stop and check on him, asking about chemo and embracing the entire family.”

As a brave fighter and soccer fan, Jude Starkey is now able to score goals in his backyard, giving him a true home-field advantage. The Starkey family expresses their gratitude toward the soccer community. “It shows what a special sport it truly is, with the best fans and players. We will forever be grateful to Energy FC for spearheading that support.”