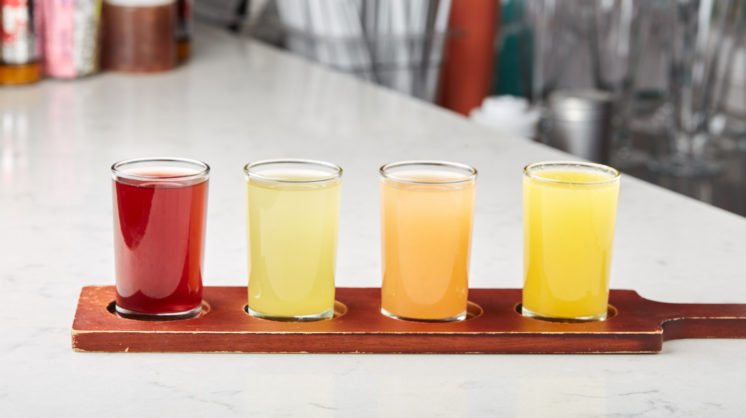 The ongoing popularity of Mimosas—the drink, not the tree—comes down to economics. Sure, the brunch beverage has been around since about 1925, but its ubiquity today is inexplicable outside pricing. Talk to Mimosa drinkers about their favorite version of the drink, and they’ll tell you exactly how much it costs, and only occasionally make a comment about the quality of the orange juice or sparkling wine.

The question “Would you spend $10 on a Mimosa?” made the matter plain; everyone said no without even thinking about it. Brunch cock- tails run about $10-12, so Mimosas appear on menus as a very attractive option—they taste pleasant, and around the 405, they can typically be had for about two to three dollars.

There is a definitional problem with what is regularly sold as a Mimosa. The actual drink— it’s not a cocktail, by the way—is 50/50 orange juice to wine. Less orange juice and more wine is actually a Buck’s Fizz, the drink from which the Mimosa evolved. Because good orange juice is more expensive than bad wine (the normal choice for Mimosas if we’re honest), the tendency is to pour heavy on wine, thus making the Buck’s Fizz one of the most popular drinks in the city.

Bartenders are divided on the issue, but more than a few echo the sentiment of Dylan Kremeier, a bartender at Barkeep Supply in Midtown: “Virgin Mimosas are the only way to go,” he said. “Better to just drink quality orange juice than add bad wine.”

Kremeier is correct that fresh orange juice is amazing in its own right, and that’s mostly not what you’re getting with your pitcher of Mimosas. More than one restaurant has been known to make a showing of juicing oranges out front and relying on jugs of very-not-fresh orange juice in the back of house to fill the carafes. There’s nothing wrong with jugged orange juice, but it’s one of the ways that restaurants are able to offer cheap Mimosas. The other way is by using wine you’d never drink by itself. It’s definitely not Champagne going into your Mimosa. If it were, your drink would cost considerably more, and if it is, it’s a tragic waste of Champagne, which should never be adulterated. Cheap sparkling wine is the typical choice.

All that being said, the drink manages to taste very pleasant, and remains wildly popular. Places like Scratch Norman (132 W Main, Norman) go one better and use orange liqueur, which definitely improves the drink and brings it closer to being an actual cocktail. It might be kind of cheating, but Cointreau, Grand Marnier, and Dry Curacao do make for a much better experience.

Neighborhood Jam (4 locations, thatsmyjamok.com) makes the drink better by using quality Prosecco, thereby squashing the weird aftertaste of cheap domestic sparkling wine. Amici in Movimento (15920 SE 29th, Choctaw) uses Prosecco as well, and the Italian sparkler does create a cleaner taste profile and finish. Good Cava works, too, and that’s the choice at Milo (6201 N Western, OKC), where a carafe can be had for $25. For the truly committed, the “ManMosa” is a standard build plus vodka. Not technically a Mimosa, but if you’re looking for a midday buzz or cure for what ails you from the night before, the vodka will speed up the process and cut the excess sugar … because we all drink to be healthy. Right?