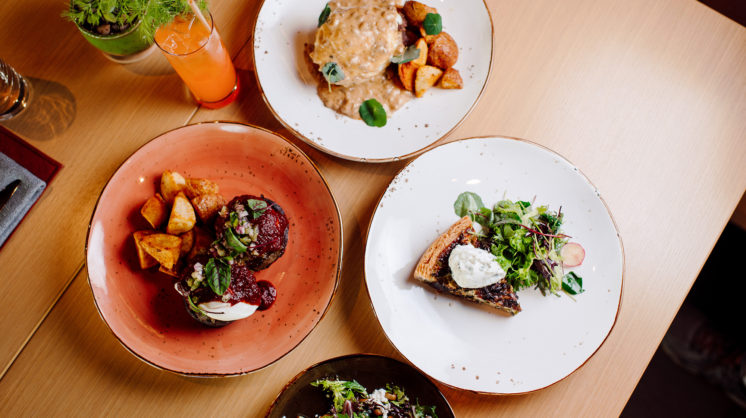 Consider for a moment the singular phenomenon that is brunch—essentially a meal at which diners agree to pay roughly twice the price of a comparable item on a Denny’s menu, for reasons that no one in the industry seems to fully understand.

“I think it’s an excuse to get one more bit of partying in without judgment,” Chef Jonathan Krell said. Krell is executive chef at Patrono, a restaurant that started offering Sunday evening brunch last year. “I did Sunday evenings so our staff could take the morning, and then industry people could also enjoy Sunday brunch after working their own brunch shift.”

LaVeryl Lower, owner of The Metro Wine Bar & Bistro, where brunch is offered twice a year— Easter and Mother’s Day—said she decided many years ago to stop offering weekly brunch for a vari- ety of reasons, not the least of which was staffing.

“We were trying to staff a restaurant seven days a week, and it just wasn’t working,” Lower said. “The morale boost that comes from having Sunday off is very real.”

That morale boost was mentioned by a couple of restaurateurs, including J. Mays, co-owner of The Hamilton. Mays decided on opening that The Hamilton wouldn’t offer brunch service.

“Our staff is small already,” Mays said, “so it would have been difficult to add another service, even before COVID. With the current staffing issues, it would simply exhaust the people we already have. Every time we’ve hired a new server or bartender, one of the selling points is that they never have to work a Sunday or a weekend brunch.”

Talking to chefs and restaurateurs, it became increasingly apparent that there is a massive difference of opinion about the desirability of brunch service between restaurants and diners. As someone who has covered restaurants for more than a decade, I can attest that when we announce a new restaurant opening, one of the first three questions readers ask is “Will there be brunch?” The public loves brunch. Restaurants, as a rule, do not. Given that, it seemed a good idea to ask restaurant professionals what they wished the public knew about what it takes to offer brunch service.

At two of the city’s most popular restaurants, Frida Southwest and Scratch-Paseo, brunch service is followed by dinner service—a phrase that holds no dread for the public, but hits differently on the ears of kitchen staff.

“We have to close the kitchen from 3:00 to 5:00 to flip the kitchen,” Quinn Carroll said. He’s the executive chef at Frida, a restaurant where the wildly popular bar remains open between brunch and dinner. “People at the bar will ask for food between those times, and we have to explain that the kitchen is closed.”

It doesn’t always go over well, but an explanation might make diners more patient and understanding. Imagine your restaurant has an inventory of 100 items for lunch and dinner service. The prep schedule and menu are built around these 100 items, and every item is used in both services and in multiple items. It’s standard procedure for a restaurant. Now, add a third service that is essentially fancy breakfast, and only a few of the items you need to pull it off are already in house: butter, cream, salt, pepper … the obvious ones. Everything else has to be added, so now you have 150 items, but two prep schedules and an additional menu.

“We have to create prep for every service that’s tailored to that service,” Carroll said. “All the brunch ingredients have to be prepped separately, so dinner prep has to happen after brunch service. That’s why we have to shut down.”

Basically, one Sunday brunch equals dozens of additional ingredients that are sparingly used, additional storage requirements, more personnel hours, more prep, and more staffing. From a practical perspective, it might as well be a whole separate restaurant, which helps explain why the Snooze style of dedicated restaurants have met with such success.

“Places like Neighborhood Jam and Sunnyside do a great job with brunch,” Krell said, “and that’s because it’s all they do. For us, it’s one more thing on top of what we already do.”

This next bit is tricky. Mimosas are a lovely hangover “cure,” and it’s clear that brunch is often, in Chef Zach Hutton’s words, “for midday drinking.” Hutton is executive chef-partner at Scratch-Paseo, and he’s up front about the brunch crowd being more demanding and less patient than a dinner

crowd. More than enough words have been spilled on the “Sunday crowd,” and anyone who has worked in the industry knows it’s very real, but no one wants to offend guests. But again, there is something the public may not know that could help.

“Saturday morning is the beginning of a 16-hour shift for our team,” Hutton said. “There are three of us in the kitchen, and the same out front, so we’ll be here for brunch and dinner, close it down late, get home at 2 am, and have to be back up here early Sunday for brunch prep.”

In industry language, that’s a “clopen,” an opening shift that follows a late-night closing shift. They are brutal. The combination creates sleep-deprived or hungover employees taking care of day-drinking guests. Am I saying that your server is hungover? I put a version of the question to everyone we interviewed. To a person, they all laughed.

Imagine being 22 or 23 in a job with flexible (if long) hours and a high-demand environment with potential for excellent money. And then imagine you just got off your closing shift on a Saturday night. Where are you headed? If the answer isn’t “dive bar with good beer-and-a-shot options,” you probably weren’t in hospitality.

Oddly enough, everyone we talked to also loves brunch. Hutton said it’s the food he loves to eat. Lower said it feels different than going out to lunch because it’s like a little weekend celebration. And Carroll said that he appreciates guests who come to dinner and brunch. “It’s like they love their meal, and now they want to see how we translate the food to brunch, and that feels really good that they like what we do that much.”

Clearly, everyone loves brunch, but mostly if they’re sitting down to eat.