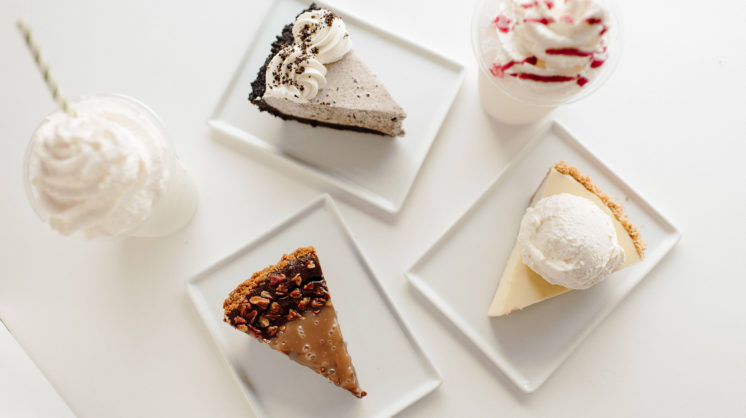 It’s delicious anytime, obviously, but pie and coffee is breakfast. The movie trope of the diner with the pie case and the white ceramic mugs full of subpar coffee fleshes out something deeply true about our collective experience of this sublime dessert. And that the pie case was right there, on the end of the counter with the slices already plated, made it impossible to resist, even for breakfast.

Thanksgiving, Christmas and eating at a truck stop diner were the three main occasions for eating pie in the middle third of the 20th century. Culturally, we’ve added March 14 – Pi Day – and we should all be glad for it, but I’ve arrived at later adulthood still not knowing where the truck stop pies came from. Were they baked in the back? Hopefully. Our grandmothers passed down family recipes that our parents executed with varying degrees of success for the holidays, when they weren’t buying Mrs. Smith’s or Sara Lee – is anything in the world heavier than a frozen pie?

In the present, we are greeted by another question: Why does Oklahoma love key lime pie so much? Sure, it’s delicious, but key limes aren’t exactly an Oklahoma cash crop. Brady Sexton, owner of Scratch Kitchen & Cocktails at 132 W. Main in Norman (which has excellent key lime pie), said, only half in jest, “When something is really popular in Oklahoma, I just assume Hal Smith had something to do with it.”

It’s funny because it’s true, at least in this instance. “The key lime pie has been on the menu of our restaurants since 2001,” said Brad Johnson, executive chef of the Hal Smith Restaurant Group. “The recipe was a collaborative effort by real family and restaurant family. My sister-in-law lives in Florida, and she sent me a case of key lime juice. For the crust, we wanted something different, so we crushed pecans, walnuts and graham crackers, and then added cinnamon and butter.”

Some version of the pie appears at nearly every HSRG restaurant – see halsmith.com – but Charleston’s, Mahogany and Redrock Canyon Grill have the version closest to the original on their menus year-round.

Plaza District darling Pie Junkie (1711 N.W. 16th St.) has so many good pies it’s hard to pick one, so we chose two. The pecan is a staple, especially around Thanksgiving, and it’s everything you want from the holiday favorite: sweet, gooey, nutty and buttery. Its bestseller has long been the Drunken Turtle, though. With fudgy chocolate, bourbon caramel and pecans, it’s so rich you can split a slice.

Somehow, it’s remained almost a secret that Cattlemen’s Steakhouse (1309 S. Agnew Ave.) has one of the best slices in the city in its coconut cream pie. Managing partner David Egan said the recipe came with the restaurant when he and Dick Stubbs purchased it. Save room for dessert, seriously.

Florence’s Restaurant at 1437 NE 23rd St. rotates its fruit pies pretty regularly, but call ahead to see if pear pie is available. If not, get pie anyway, but then go back for the pear pie. With ice cream on the side.

One of the few places that still has an actual pie case is Johnnie’s Charcoal Broiler at 2652 W. Britton Rd. It has several options, but the chocolate cream has been the favorite for decades, and for good reason.