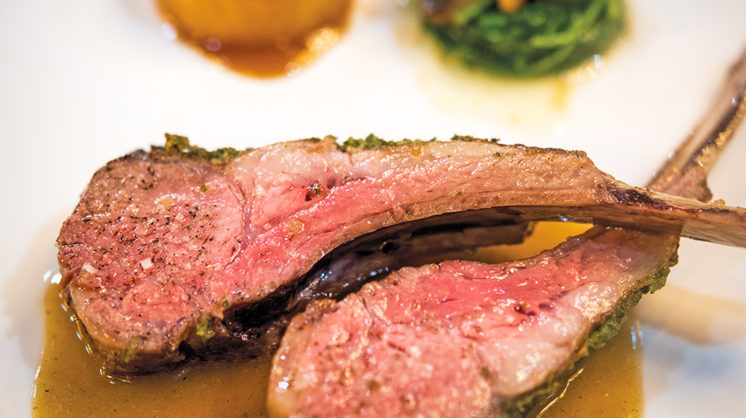 In French, “door” is “la porte.” That’s part of why I suggest that you think of the entrance to Edmond restaurant Fait Maison as a portal – to help get yourself into the Francophile mindset – but also because calling this a door seems too prosaic. Walking through it feels as though you’re moving from a construction-studded stretch of side street near downtown Edmond into … someplace else entirely.

Inside is a color scheme of gilt and cream and soft gray, set aglow with low but intentional lighting through a constellation of chandeliers and sconces. The single room has an array of tables for four and tall, semiprivate semicircular booths flanking both walls, allowing for conversations without feeling standoffish. “We feel like it’s very personal, very intimate,” says co-owner Susan Wedel. The cumulative effect is quietly, warmly elegant – you might find yourself speaking in a slightly hushed voice without realizing it – and more than a touch romantic, especially with candlelight shining through a wine glass and a chanteur murmuring in French over the speakers.

That’s Fait Maison: a partnership between Wedel and Olivier Bouzerand, themselves partners in life as well as business as the result of an intercontinental romance. Longtime Edmondite Wedel acts as the face of the restaurant, circulating during dinner to chat with guests and inquire about optimizing their satisfaction. Meanwhile, Bouzerand, who was born in Pithiviers (between Paris and Orleans) is the flavor, overseeing the output of the kitchen. And if you, like me, find yourself rhapsodizing about the atmosphere, wait until you taste the food.

Regardless of what you order, your meal begins with a complimentary splash of the soup of the day (cross your fingers for butternut squash, which is velvety and rich but so light in texture it’s almost like foam on the tongue); an amuse bouche plate including a mini gruyere tart and tiny, salty olives; and a choice of house-made breads – Wedel said she prefers the red wine and raisin, while I support the potato bacon, but you’re given the chance to sample more than one over the course of the meal. 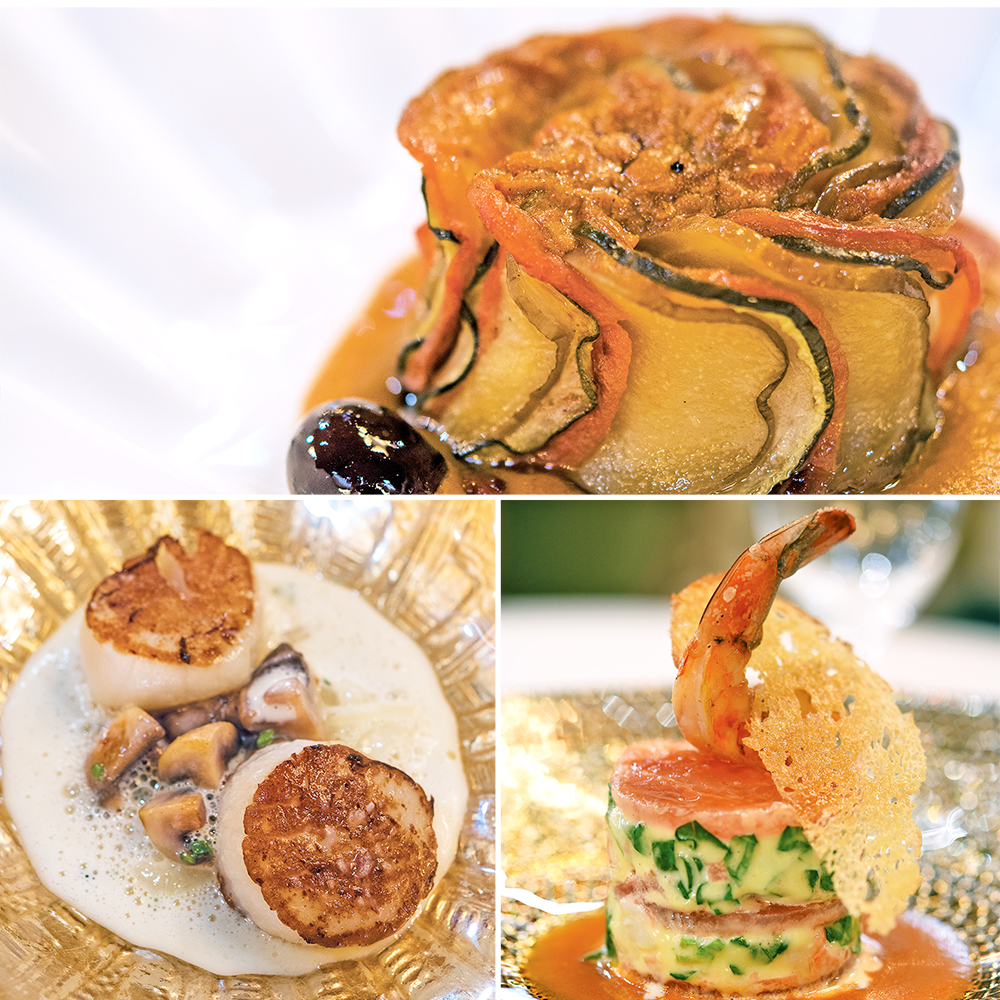 For an appetizer, the shrimp Napoleon is an architectural feat, as well a culinary treat, the crispy crusted soft-boiled egg is an intriguing reward for experimenters and you can hardly go wrong with seared foie gras. But my prime recommendation is a plate of simple, perfectly seared scallops served with onions and mushrooms in a simply outstanding vermouth cream sauce. Honestly, I try to avoid mushrooms in my daily life, but I cleaned my plate with gusto. And thanks to a recommendation from the kitchen, I can tell you it pairs beautifully with an Alsatian gewürztraminer – maître d’ and sommelier Hoyt Hill can give you the name.

The half-dozen entrees span proteins from chicken breast to roasted lobster to rack of lamb, but I can tell you I quite enjoyed the pan-fried turbot filet in a creamy truffle sauce with a side of tender, flavorful ratatouille, and the honey-lime duck breast with a poached pear and a copper dish of beautifully executed parmesan risotto. While quick to deliver a qualifying “Everything on the menu is really, really good,” Wedel will, if pressed, recommend the filet mignon, especially due to its thick, redolent red wine sauce and honey-candied shallots.

Dessert is its own irresistible arena, and you’re on your own for it. You don’t need me to apply the word “delicious,” insufficient as it frankly is, to the prisms of crispy chocolate praline cake that are like candy bars’ previously undiscovered royalty, or to the signature crepes stuffed with an orange soufflé and flambeed in Grand Marnier, or to a dish of what comes close to being the Platonic ideal of crème brulee. You will love whatever you get. Or you could take Wedel’s advice: “The Brandy Alexander is amazing; it’s my favorite thing. When they mentioned that we were making homemade ice cream, I said, ‘We have to have this.’ We sell an awful lot of those, they’re delicious.” 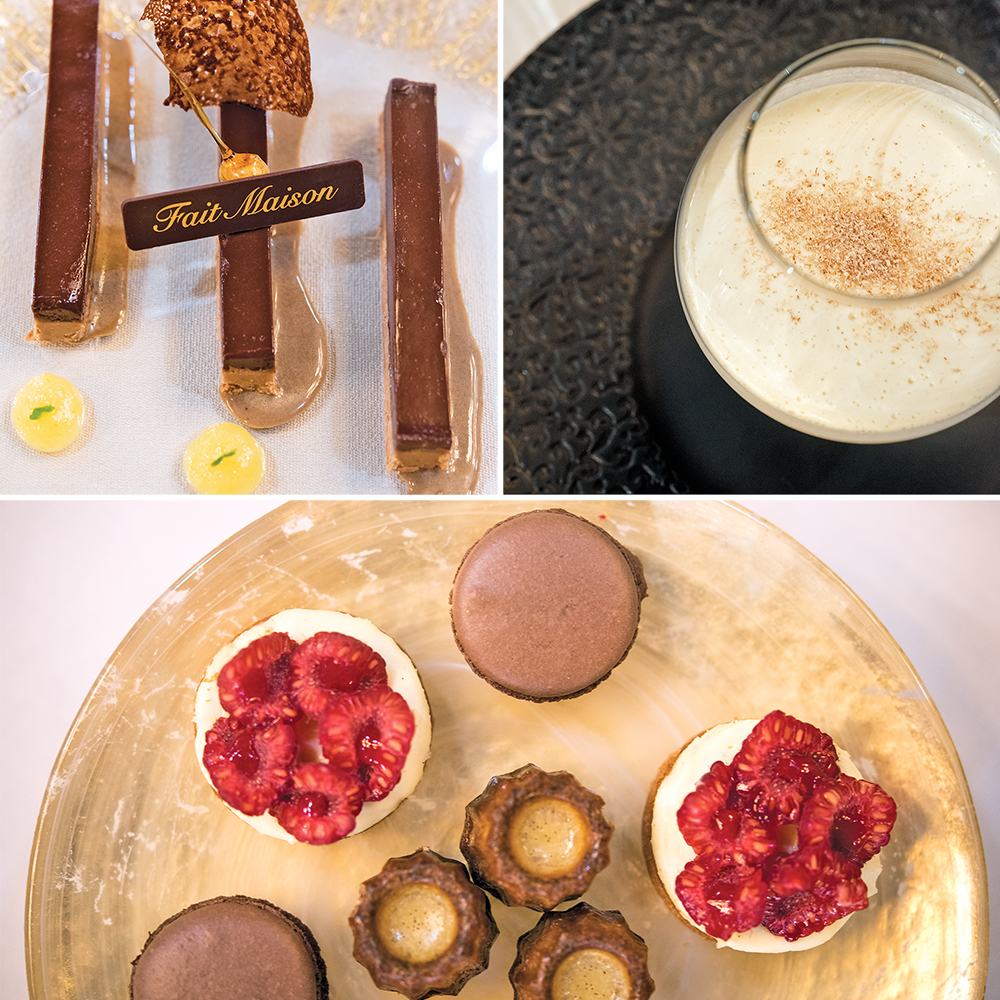 It’s all presented in spectacular, soigne style, including fresh silverware with each course (bien sur), quietly attentive service and the enchanting atmosphere suffusing everything. After one final handful of complimentary mignardises, a handful of confectionary morsels like a postprandial amuse bouche, it’s time to venture back through the portal into Edmond … though you may find yourself feeling some reluctance to leave. This is a genuinely dazzling dining experience, one that might be surprising to find here, but that should be greatly to the community’s benefit. In addition to being a dynamite chef, Bouzerand owned a respected restaurant in Cannes before romance helped bring him here – now we in central Oklahoma are in a position to reap the rewards of his lifelong experience and skill.

Fait Maison has been keeping a fairly low profile since opening last November; Wedel said they’ve been relying primarily on word of mouth to build their audience, but that they’ve begun developing a retinue of repeat customers, and their Valentine’s Day bookings filled up weeks in advance. If this is your introduction to the restaurant’s existence, go give it a try. You’re likely to find it magnifique.