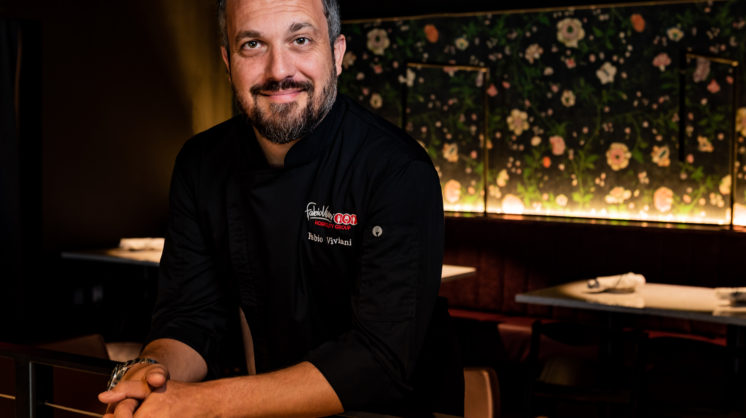 Fabio Viviani, the Tuscan-born restaurateur, writer and contestant on “Top Chef,” arrived in the U.S. in 2005. He remembers the date because it was the first day of what was supposed to be a yearlong vacation.

“September 20, 2005,” Viviani says. “I rented a place in Malibu, California, and after two months I was miserable. I’d never had a vacation in my life, so I found myself a job.”

The math leads to the realization that Viviani took his first time off at 27 – still young, but pretty well into life to have never had a vacation. “I grew up on food stamps,” he says by way of explanation. “I got my first job when I was 11, and worked six or seven days a week until I was 25.”

The extended U.S. trip was the result of his selling his business in Italy – a restaurant, club and small hotel. He used the proceeds of the sale to take care of family debt, and then used the remainder for a vacation. When he arrived, he spoke no English, and his experience of the U.S. was similar to millions of other people who have never been.

“For Italians, America is what you see on the TV,” he says. “Sitcoms and other TV shows give you a little idea of what some of the main cities look like, but I didn’t know what to expect. Just like Italy, which is made up of 21 very different regions, the United States has ginormous diversity in its 50 states – cultures, cuisines, everything – so for me, it was fascinating.”

His first American meal was In-N-Out Burger, and while he doesn’t say much about the burger, he remembers being puzzled at why he had to sit down at a table to wait for his food. “In Italy, you order a sandwich, they make it in front of you, and then hand it to you,” he says. These cultural differences were especially evident when he went grocery shopping for the first time, roughly two months after his arrival.

“We don’t celebrate Thanksgiving in Italy; I know nothing about Thanksgiving, so I walk into the grocery store and I was like, ‘What the hell is with all these turkeys? Why does this country love turkey so much?’ I only knew a couple of Italian people in California, and they didn’t tell me about Thanksgiving, so fast forward about two and a half weeks and I go grocery shopping again: No turkey anywhere to be seen! I think, ‘This is a very odd way to run a supermarket.’”

Viviani would learn the lay of the land over time, and thanks to an American wife from Illinois, he would come to love the Midwest and its cuisine, as well as the Southern states. “They remind me of southern Italy – casseroles, braised meats, seafood, and never-ending boiling things on the stove.” An avid learner, Viviani dove deep into American cuisine, but his love remains Italian food, and the composition of his restaurants reflects that, including his two in Oklahoma City: Osteria and Bar Cicchetti, although the latter is billed as Mediterranean.

For holidays in Italy, Viviani said the food tends to be large format: whole roasted chicken, pork on a spit, big bowls of pasta – anything that “goes in the center of the table and everyone digs into it.” Holiday food is family-style according to what families can afford, and it’s seasonal, not holiday-specific. “Turkey is a year-round food, not a seasonal food; it’s like beef or pork.”

His journeys around the world and the U.S. have convinced him of something very important to food and travel: “Travel can expand your understanding of cuisine, but you’re not going to discover new things, except for region-specific items, like okra in the American South. What you find are different ways to use the same ingredients. After all, how many ways can you cook something?”

The one distinctly American thing he loves? “Cheesecake. I want 50 grandmothers – one from each of the states – to make me their recipes. You can never get enough good cheesecake.”