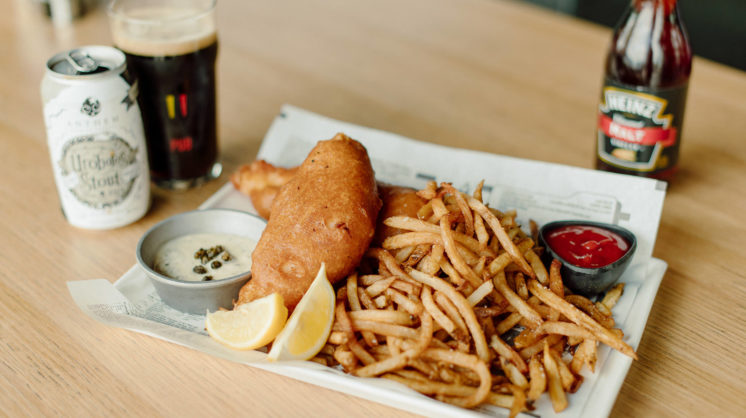 Gordon Ramsay aside, the UK isn’t necessarily famous for its cuisine, and a long-running stereotype (the French are probably at least partially to blame) is that its food is just bland and uninteresting. In fact, Ramsay’s home country of Scotland is better known for haggis than anything else besides foggy nights. But one dish has endured in the U.S., and unfortunately, the Brits don’t really get credit for it.

Fish and chips showed up in London’s East End in the middle of the 19th century; an Ashkenazi Jewish immigrant named Joseph Malin is credited with opening the first “chippy” in 1860. A form of the dish arrived in England roughly 300 years before Malin – when Sephardic Jewish refugees from Spain and Portugal brought “pescado frito” recipes from their home country – but the chips were added much later. (Predictably, France and Belgium have argued for years about which country first fried the potato, with both taking credit for it. It was probably Luxembourg.)

The fish used has traditionally been a whitefish, most often cod, but it’s not unusual to find haddock and tilapia in the U.S. Good fish and chips might seem like a pipe dream so far from the coast, but fried catfish and French fries is the Okie version of fish and chips. More to the point, we also have some excellent plates of the more traditional cod and haddock styles around the 405.

As a complete meal, it’s hard to beat the fish and chips at Hopscotch, Joe Jungmann’s pub at 10909 N. May. Every element – from the texture and flavor of the fish to the structure (it doesn’t fall apart), the flavorful, crispy batter and the fries – is close to perfect. It’s served traditionally, as in long, chunky “fish sticks,” with creamy tartar sauce and tangy coleslaw that also set this dish apart. Plus, Hopscotch has an excellent selection of local beers, as any good pub should.

Pub W (four metro locations, pubdub.com) uses haddock for their version, fried in light, crispy batter. Once you add lemon and tartar sauce – theirs is excellent – some of the nuances of the fish go away, but haddock tends to be milder than cod, so while the differences are minor, people who don’t go for “fishy” fish will likely prefer haddock.

The batter at Republic Gastropub, 5830 N. Classen, benefits from Shiner Bock and Old Bay Seafood Seasoning. The combination adds an almost sweet note to the crunchy shell surrounding the cod, but more than anything, it moves the dish into a more complex, more interesting realm. For even more flavor, they add capers to the tartar sauce, a delicious twist you won’t find elsewhere.

McNellie’s, as is appropriate, serves up excellent fish and chips at 1100 N. Classen. The haddock comes out as a whole filet, which, while not traditional for the dish we inherited from England, does take it all the way back to the Jewish cooks who prepared pescado frito with whole filets prior to the Sabbath. McNellie’s version is simple and tasty, and the flavor of its batter was the best in the city.

Off the Hook at 125 W. Britton uses tilapia in a version that’s straightforward Southern cooking. All dishes evolve, and tilapia makes sense in this part of the country – as does catfish – but the temptation at Off the Hook is to abandon the “chips” part in favor of mac ‘n’ cheese or okra. Go where your heart leads you.