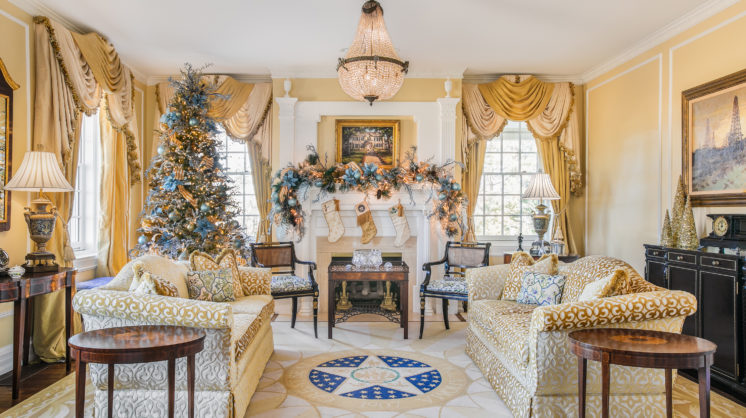 A state treasure, the governor’s mansion shines brightest in the winter.

Twelve years ago, interior designer J. Mark Taylor stepped inside a very special home for a very special project. Taylor was tasked to redesign the Oklahoma governor’s mansion to better suit then-incoming Governor Mary Fallin. Taylor described it as a “hair and make-up” sweep through the home, updating walls and floors to refresh the rooms.

Little did he know back in 2009 that the mansion would continue to enthrall and engage him to this day; Taylor has been decorating the stately 14,000-square-foot residence every holiday season since.

In 2019, Taylor served an integral role in a major renovation. At that time, just before Governor Kevin Stitt and his family moved in, the 1927 structure required many repairs — replacing windows, fixing the roof, remediating water issues and restoring damaged woodwork were just a few pressing needs.

“Like anything else, when politics are involved, nobody wants to spend money, but it’s a state treasure,” said Taylor. While Friends of the Mansion fundraises for ongoing maintenance projects, the scale of this project required more … so much more.

“The state departments collected bids for all of the work that had to be done, and those bids were totaling 8 million dollars. The legislature allocated 2 million, saying ‘That’s all we can do,’” Taylor said. “Because the Stitts are so frugal, we did everything that needed to be done, plus updating furnishings, within that budget.”

Considering 18 families had previously moved in and out of the mansion, each slightly altering it, various stages of the last century could be found within the kitchen and bathrooms. Those areas had to be completely torn out and rebuilt to function efficiently. It was a major undertaking, and many Oklahoma companies generously donated their services and products — or provided them at deep discounts — to make renovations possible.

Interior design decisions were a collaborative effort between Taylor and First Lady Sarah Stitt. She guided color themes, and they used antiques and reupholstered furniture already in the mansion to reduce costs. When they did add new furnishings and decor, they sought to incorporate styles true to the original 1920s period of the mansion.

“The goals for the house were to restore it as closely as possible to its origins of 1927,” Taylor said. “The first lady is very gifted. She has a lot of vision, and she has a great eye.”

The first project that Taylor tackled with the Stitts was the kitchen, the workhorse of the home. The layout had to accommodate both commercial-type features and everyday family use.

“The kitchen needed to be a modern family kitchen that also served almost as a commercial kitchen, because the mansion is a primary entertaining space for dignitaries that visit the state — and for people who are visiting and looking to bring businesses into Oklahoma,” said Taylor.

The dining room was refashioned with the same grand events in mind, as well as the foyer, which makes quite a first impression. A custom rug of tufted wool and silk, handmade by Fabrica, greets visitors with our state symbols: military stars, buffalos, words from the state motto and the shield of the state flag. The winding staircase maintains a unique design feature which was added during the Keating administration, listing governors’ names and terms along the rising steps. However, Taylor and Stitt chose to update the colors to match the Oklahoma themes.

“Mrs. Stitt’s heart in this [home] is that it belongs to the people. The Stitts see it almost as a museum to share, rather than something for them to hold onto,” Taylor said.

Design enthusiasts can schedule a tour of the governor’s mansion by contacting historian and tour coordinator Liz Wood at liz.wood@gov.ok.gov or (405) 888-6353. The expansive rooms are extra-special when they sparkle with festive seasonal decor on trees and mantels. Decorating for the holidays every year is a highlight for Taylor, because the governor’s mansion is so meaningful to him.

“It’s a place that is near and dear to my heart,” Taylor said. “I love going there. I love being a part of it. I love the staff. So it’s never been just a job to me. It’s such an honor, and I want to give my very best.”