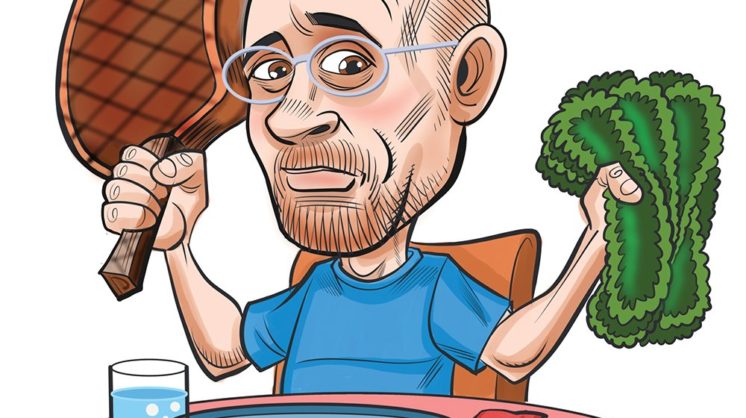 Some extremely frustrating words came from the doctor’s mouth: “You’re going to have to do something about the high blood pressure. It’s not something you can ignore.” Those words usually lead to a couple realizations, two of which may, depending on your lifestyle, sound fairly awful: major changes in diet and actual physical movement beyond reaching for a remote or clicking a mouse. As to the latter, there are more options than any person can count, plus an army of devices, trainers and even clothing lines to facilitate change. The food, though …

The Mayo Clinic recommends the DASH diet for high blood pressure, and reading through it can be a bit depressing, especially if – like many Oklahomans – you love red meat. No, it doesn’t say meat has to go, but it does advise limiting your diet to six ounces per day. Six ounces is one small hamburger patty. Per day. Into the foreseeable future.

The second restriction was nearly as bad: reduce sodium intake, by a lot. Checking food labels for sodium was not a common practice for me, but doing so led to one inescapable conclusion: no more cold cuts. Also, most processed foods, including canned foods, are out.

Taking the advice seriously, though, does require a reformation in eating habits, and the best, most flavorful way to go seemed to be “flexitarian.” Most people are not going to go full vegetarian, and even fewer are going full vegan, but it is possible to incorporate more non-animal-based products into a healthy diet that is also satisfying and delicious.

One local expert on this – although she might eschew the honorific – is Elena Farrar, who’s a partner in Elemental Coffee. The Midtown destination is beloved by vegetarians and vegans, but also serves meat, cheese and other products horrifying to vegans. Farrar is not herself a vegan, but she’s closer to it than omnivorousness. In other words, she has a healthy balance of the right kinds of food in her life, and she allows herself some indulgences.

“It’s good to eliminate meat slowly,” she says, on being asked about moving toward a flexitarian diet. “Throw in substitutes like quinoa. It’s high in protein and has great flavor, and like tofu, it picks up the flavors around it.”

Here’s the truth: Most meat substitutes are not as good as meat. That’s basically always going to be the case – with some rare exceptions mentioned later – but certain meat substitutes do work well as part of more complex dishes. Farrar uses Gimme Lean breakfast sausage in Elemental’s grab-and-go breakfast wraps. While its flavor is inferior to pork sausage if eaten as a patty, when it’s combined with eggs, hot sauce, and potatoes, it tastes just enough like sausage to make it a solid substitute.

“I tell people that if you’re trying to reduce salt, you can’t eat anything that comes from a box or bag.”

One of the trouble areas in switching remains the tendency for vegan or vegetarian (especially vegan) cooks to try to replicate favorite dishes of meat eaters. Mostly, it does not work … but it is worth noting that Henry Boudreaux at Aurora, Patrick Clark at Red Cup and Farrar are some of the best in town at tricking your taste buds.

“Trying to replicate dishes leads to less healthy vegetarian or vegan dishes much of the time,” Farrar says. “Vegan cheese is made with nuts, so it’s high in fat.”

That’s especially true for cashews, which are even higher in the bad fats than usual for nuts. (If you want to split hairs, cashews are technically seeds.)

Instead of trying to recreate a hamburger – veggie burgers are never as good, emphasis on never (Note: Greg Horton’s editor vehemently disagrees) – Farrar recommends building dishes around vegetables. One of her favorite options is to roast a variety of root vegetables and toss them with quinoa or faro. Salted lightly, the dish isn’t trying to pass for meat, but it’s satisfying and loaded with protein.

Without salt, though, seasoning becomes an issue. Farrar said she uses some; she just doesn’t over-salt. She also knows her way around a spice rack, as does Able Blakely, the owner of Savory Spice.

“I tell people that if you’re trying to reduce salt, you can’t eat anything that comes from a box or bag,” Blakely says. “We have at least 50 different seasoning packets that are salt-free, that will help you amp up flavor without adding sodium.”

Farrar recommended Whole Foods and Natural Grocers if you like to cook at home. Many of us don’t have time, though, and eating out can be problematic because many restaurants don’t intentionally do flexitarian well. However, converting to this diet is not as difficult as it seems, and that’s largely because the vegetarian and vegan communities have had a definite impact on Oklahoma City’s culinary culture; a few places do flexitarian very well:

Especially the vegan meatballs, but plenty of vegetarian options, too.

More choices than anywhere else.

All vegan, and Chef Clark is one of the best in the state with plant-based cooking.

The veggie plate is popular, but the lentil curry is one of the best things in Oklahoma City.

Too many options to list, and all are delicious.

A favorite for years in the metro, and the vegan pho will make a believer of you.

You need dessert, and vegan donuts will also make a believer of you.

The Health Nut wrap is vegetarian, and it’s delicious. They have many options beyond that, as well.