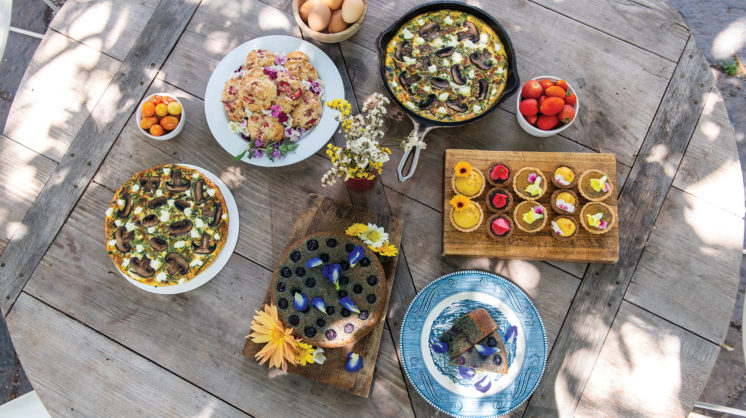 Aina Robinson started thinking about being a baker full time on a girls’ trip.

“We went to Memphis, and I fell in love with Cheesecake Corner,” says Robinson, owner of The Cheesecake Lady. “There was nothing like it in Oklahoma City. You could get cheesecake on a dessert menu, but you couldn’t find a place that was about cheesecake.”

On the way home from Tennessee, she started building a Pinterest page for ideas. After developing some signature cheesecakes, testing them on friends and coming up with a line of products, she launched The Cheesecake Lady in August 2019. 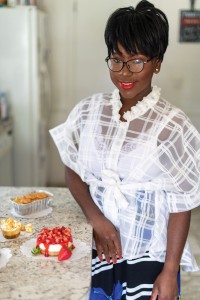 “It was always my favorite dessert,” she says, “but I never planned on being a baker. I had a regular 9-to-5 gig in a data job, but encouragement from my friends, and some help from the home baking legislation this year, made a full-time baking job possible.”

Robinson bakes from her home, like many small bakery businesses, and she delivers custom orders the same business day. She only works with custom orders; she receives enough that making batches doesn’t yet work for her business model. Her line includes mini bites, “bundt cakes,” bars, small and large pans – nearly any way you can picture a cheesecake. The crusts run the spectrum from graham cracker to brownie to gluten-free walnut, and all her fillings are made from scratch.

The Cheesecake Lady’s customer favorites are classic strawberry cheesecake and a hybrid sweet Georgia pecan pie-cheesecake mashup that’s a wonder to taste. It’s also a perfect holiday option, as are the other flavors she makes throughout the holiday season: carrot cake, peach cobbler and peppermint bark. 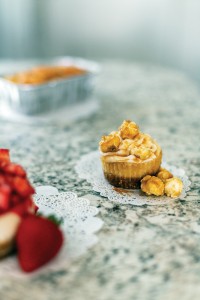 For Robinson, the secret to perfect cheesecake is the bain marie (water bath) that gives the center time to cook without browning the top. “It’s a delicate product, so you have to treat it right,” she says. “I also deliver in cooling bags, so it’s fresh and cold; that’s really important in Oklahoma heat.”

Like Robinson, Aaron Smith didn’t start out to be a baker. His grandmother taught him to bake, and he describes his mother as a “decent cook.” He showed no interest in either until he was 20.

“I’d been out of school for two years, and decided to give culinary school a try,” he says. “I wanted to be a master chef at first, to be good at all aspects, but I gravitated toward baking.”

After finishing Platt College, he and his wife Rhonda launched Signature Bakery. Their breads and pastries are available at the Paseo Farmers Market and Scissortail Farmers Market this year. Thanks in part to the Food Freedom Act, they’ve invested in a commercial oven that will allow Signature to increase its volume. 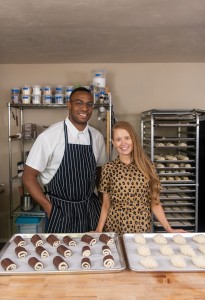 “We’re doing about 350 pastries and 20 loaves of bread a week currently,” Smith says. “We’d like to do more. Our bestseller is the pain au chocolat, but the cruffin (a croissant-muffin hybrid) is close.”

Baking in Oklahoma has its challenges, including heat, humidity, more humidity and more heat. Smith said a good baker can create microclimate in the kitchen to combat those factors.

As a result, the couple spends a good bit of the week scaring up ingredients from farmers, Whole Foods, farmers markets and fruit stands. Baking is now an everyday job, and the couple is preparing for the holiday rush. 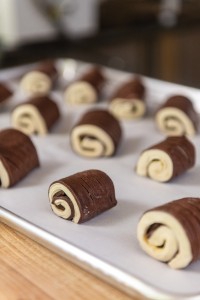 “This is the first year we’ll do holiday offerings,” Smith says. “We’ll obviously do breads and pastries, but we’ll also offer cakes, pies and dinner rolls.”

Pies are the wheelhouse of Angela Chase, founder and owner of Flora Bodega, and it was an unlikely career path for the baker who’s cooked since she was a child.

“I didn’t like pies as a kid,” she says. “I’ve since learned it was because my family made mediocre pies. I make them a lot now because I started by making a crust that I want to eat.” 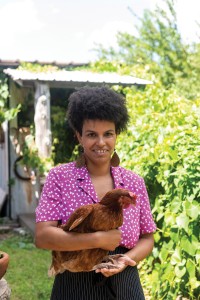 Whether it’s lost skills or inferior products due to mass production, baking is definitely not what it used to be. All the bakers we talked to referenced their grandparents as the keepers of the traditions, not their parents – almost as if baking decided to skip a generation and take a break in the 1980s and ‘90s.

“Home cooking was flavorful when I was a kid,” Chase says. “My grandparents in Durant cooked from a garden; it was country cooking. Lots of butter.”

Butter was the key ingredient for her crust. Like many in the 30 to 50 age range, Chase went from eating real butter to Crisco or margarine. It was one of the principal sins of the 1970s, and it ruined baking. Crisco crusts taste like dry bread and synthetic grease. (Honestly, that’s a pretty accurate description of what it is.)

Cultured butter is just what it sounds like: cream with bacteria cultures added to make butter. The cultures add wonderful tangy, nutty notes, and those notes come out in the baking. Chase does savory and sweet pies, and the buttery crusts work for both, accentuating different notes in each category. Scones and frittatas are other popular offerings.

Flora Bodega pies are available at the Paseo Farmers Market, and Chase also makes them to order. Her goal is to showcase the best ingredients and keep the product affordable. She’s making more cakes now, too, including an organic blue corn cake.

Kelly Lisenbee started Bright Spot Baking during the COVID lockdown after experimenting with reverse-engineering famous cookie recipes. It started with the Doubletree Cookie.

“It has lemon juice in the recipe, and I was wondering why, so I started riffing on it,”says  Lisenbee, who works in administration in public schools. “My friends and family like the results, so in June, I really leaned in.”

When she started, she was unaware of legislation like the Oklahoma Home Bakery Act of 2013 (amended 2017), and how it helped cottage industry in the state. 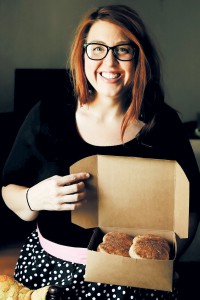 “I didn’t know that expanding to be a full-time business was even an option,” she says. “My husband is in radio, so he’s not 9 to 5, we have a son who plays sports and our youngest has autism, so we’re always looking for ways to create flexibility and generate more money.”

What she didn’t expect was the $20,000 cap on revenue allowed under the legislation. While it made it possible for bakers to advertise their businesses and sell from their homes – as well as farmers markets and the internet – the act limited their potential revenue, a frustrating reality for young parents trying to support a family. Requirements such as labeling and ingredient transparency aren’t onerous, but the revenue cap seems arbitrary.

“We have legislation that will be filed for next session to deal with many of the issues home kitchens face,” says Representative Garry Mize (R – Dist 31). “The Food Freedom Act, which didn’t pass last session, attempted to remove the cap, but I think we’ll have a compromise next year with a higher cap. I just don’t see the cap being removed completely.”

Editor’s note: To order goods from The Cheesecake Lady, visit facebook.com/theofficialcheesecakelady; for Signature Bakery, visit facebook.com/signaturebakeryokc; Flora Bodega goods are available at angelareneechase.com; and cookies from Bright Spot Baking are at brightspotbaking.com.