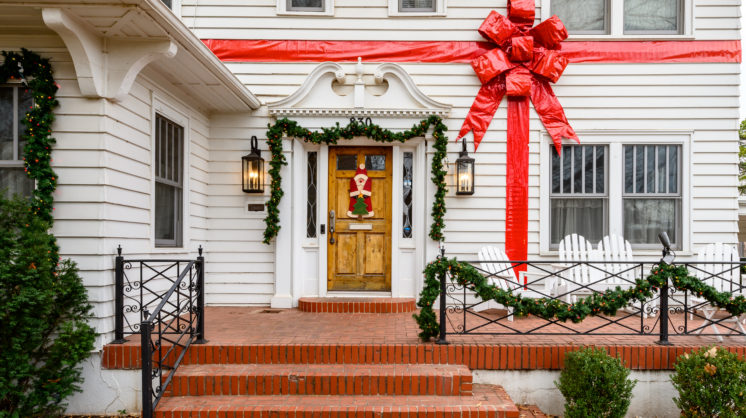 For years at Christmas, Ronna Jackson’s dad and stepmother decorated the outside of their two-story Norman home with a giant bow, making the entire house look like a gift. They dropped a red ribbon about a yard wide from the roof about 22 feet to the ground below and unfurled a ribbon vertically the width of the house — about 30 feet, Jackson said. Where the two ribbons intersected, they fashioned a giant red bow.

Jackson and her husband have continued the tradition since they bought the home across the street from the University of Oklahoma campus a few years ago. The process for installing it has become routine, and their gift-wrapped home is a tradition that makes their house stand out for neighbors and passersby during the holidays.

“I think it makes the house look cheerful,” Jackson said, adding that it still makes her dad happy.

Decorating for the holidays outside sets a welcoming tone for the festivities within, and many local homeowners turn to designers like Calvert’s Plant Interiors and New Leaf Florist for the magic touch.

Bows and ribbons, metallic baubles and greenery can transform a doorway arch and sconces out front, said Greg Davis, owner of New Leaf. Davis has been helping people add magic to their Christmas decorations for years inside and out. Over the years, he has also learned how to secure everything (without damaging the home itself) so the decorations can handle an entire holiday season in Oklahoma’s wind.

This year, Davis said he is noticing people going for a more natural, woodsy look — more greenery with embellishments such as berries. His clients also have embraced different colors in addition to the traditional red, green, white, gold and silver — such as blue, lavender and champagne. This trend follows a renewed emphasis on being home, fostered by the pandemic.

“Everything goes in circles,” Davis said.

At Calvert’s, ideas for design start with its holiday showroom, where people can see the possibilities, said Abbie Wilkerson. Like Davis, this year she is seeing people choose royal blue and plum for holiday decorating; last year red and white were the hot colors. Rose gold is big, too. She noted that at Market, pampas grass plumes were a big part of holiday décor this year.

In the end, the designs are up to each individual and their decorating style and preference.

“We do custom designs for everybody,” Wilkerson said.