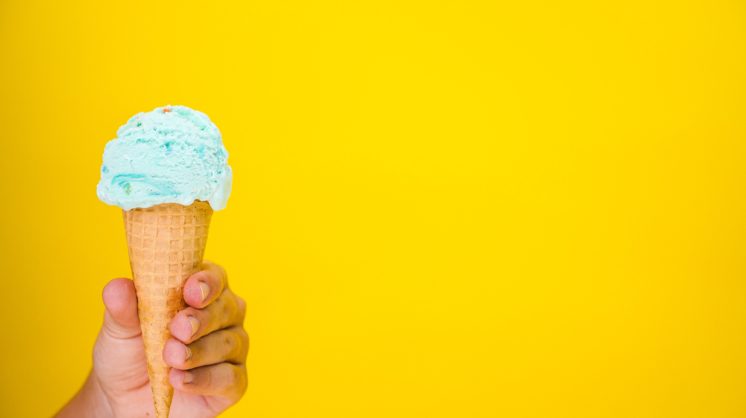 We all still scream for ice cream!

Once you see a picture of ice cream, reading about it is almost redundant. The joy is programmed in from childhood: birthday treat, special occasion, homemade project in the summer, a bowl with grandpa for no reason but to spend time together immersed in the simple pleasure of a story accompanied by sugar, cream, milk and whatever flavor you prefer. If that isn’t enough, we learn the “scream for ice cream” chant when screaming is still considered normal behavior — children scream when the moment is too big for their rudimentary emotion control skills.

We’re conditioned. When we were prepping the photo that accompanies this story, photographer Lexi Hoebing said, “Put the pistachio on top. The order of the other two doesn’t matter.” Why? “I just want the pistachio to be easier to eat,” she said, and the other customers in Roxy’s Ice Cream Social chuckled and nodded approvingly.

Ice cream exists in the dessert category, but it’s a dessert that, like donuts or a candy bar, doesn’t have to be part of an actual meal. Perhaps “treats” is a better name for the category. Ice cream is also special in that it stands on its own. It doesn’t need help. If there are other ingredients with the ice cream, it’s kind of like winning a million dollars, and then being told you get a house and car in addition. They enhance; they don’t improve. Ice cream is already perfect.

At Roxy’s, you can choose from more than 20 flavors, and that might be the hardest part of the process. Some customers always choose the same flavor: vanilla, pistachio, German chocolate, strawberry. Nothing wrong with that, nothing at all. Others will switch it up, and Roxy’s does offer rotating seasonal flavors at all locations so that everyone will find something they love.

Ask anyone who grew up around Oklahoma, though, and they’re going to list Braum’s among their favorite ice cream joints. Braum’s has been there for us since childhood. Chocolate almond malt after tee-ball? Check. Birthday party with ice cream and cake? Yup. A shake and crinkle-cut fries after a break-up? Absolutely.

For a composed ice cream dish, though, it’s hard to beat one of the new kids in town: the only dessert on the menu at Birdie’s Fried Chicken, Chef Kevin Lee’s Korean fried chicken concept. The Bananas Foster Sundae starts with vanilla ice cream. Of course it does, because when we think about it, vanilla’s great contribution is its ability to enhance something delicious (cookies, lattes, cereal, yogurt parfaits, etc.) and to bind the whole thing together, like a bridge ingredient. Birdies adds banana pudding, sauteed bananas, cinnamon, caramel, whipped cream and a fresh churro to craft one of the best desserts in the metro.

For creative blends — like blackberry pie or fudge brownies — Capitals in Midtown and Cities in Edmond offer locally themed frozen treats, as well as a build-your-own option. The pie is seasonal, so ask which you can have blended into your ice cream. It’s like being a kid all over again.