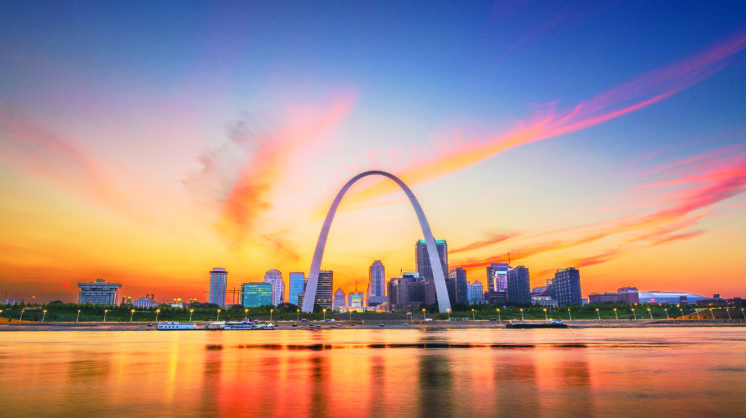 Like any U.S. city of a respectable size,  St. Louis has been shaped by waves of immigrants, beginning with the French who founded it in 1764. Germans and Italians followed the fur-trading French; freed slaves escaping Reconstruction-era policies settled in many Northern cities including St. Louis in the late 19th century and the waves continued into the late 20th century when refugees from the Bosnian War began arriving in the early to mid ’90s.

As opposed to the now-discredited model of the “melting pot” of American immigrant expansion, St. Louis neighborhoods were founded by ethnic communities in a patchwork quilt model that meant each neighborhood would develop in unique ways with cultural and ethnic components, many of which are still visible today. St. Louis remains a city of neighborhoods, and much like cities built around districts, the neighborhoods offer smaller, focused, signature experiences of the larger city.

The patchwork quilt also makes St. Louis architecturally fascinating. Downtown alone has styles from the 1830s to the contemporary era. Beautiful contributions around the city from Louis Sullivan, Frank Lloyd Wright and Eames and Young, among others, make the city a destination for students of residential and commercial architecture, from row houses to houses of worship to skyscrapers to the city’s famous gingerbread houses.

Built on the western bank of the Mississippi River just south of its confluence with the Missouri River, the city has a long tradition of commerce, transportation, literature and gambling related to the river. Today, replicas of the great riverboats are on the water for tourists, and located in fixed spots for gamblers.

The city is also home to multiple James Beard Award winners, and a longer list of James Beard semifinalists and finalists. The food scene is broad and deep, with culinary influences that reflect the wide range of ethnic and cultural influences and the city’s role as a crossroads and destination in the heart of the country.

Where to Stay Le Meridien Downtown. A Marriott hotel, Le Meridien is located in an historic building (built in 1913) now on the National Register of Historic Places. The rooms are influenced by the original architecture with a modern art twist, and they are spacious beyond what is normal on the road. The hotel has all the expected amenities — and you should definitely get a gelato at Le Scoop. As important as a good night’s sleep is the hotel’s location just off the major interstate junction, making the entire city easily accessible. In addition to that benefit, Le Meridien is a short walk from one of the city’s most popular attractions, the City Museum, and a short drive from the Gateway Arch and park.

Where to Play The City Museum is a 600,000-square-foot facility housed in a former shoe factory. It has to be experienced to appreciate the scale and ingenuity. No maps will guide you through this combination of carnival rides, play areas, exhibits, interactive installations and a mix of eclectic discoveries too numerous to list. It’s ideal for all ages, especially the explorer types of any age.

Soulard. This is one of the city’s historic neighborhoods, and that it’s home to the country’s second largest Mardi Gras parade tells you all you need to know about this district with more than three dozen bars, restaurants and shops. It’s located just north of the Anheuser-Busch Brewery, so you can hit both for a full day of fun. The Soulard Market is the heart of the neighborhood, with its massive selection of goods — meat, fish, produce, jewelry, gifts, etc. — from independent shopkeepers and artisans. Bonus: It’s less than a mile from the National Blues Museum.

Saint Louis Art Museum. Located in Forest Park, this three-story structure contains one of the best art collections in the country. It’s hard to express the awe you feel when you enter an entire room of Monet or Picasso works. The lawn is stunning, as is the view. Admission is free, and it’s a must-do when in St. Louis.

Where to Eat When Eater ranked its “essential” St. Louis restaurants, Olive & Oak was number five. The modern American concept in the quaint Webster Groves neighborhood is an anomaly these days: a neighborhood restaurant with stellar, affordable, creative food, a brilliant young chef (two James Beard nominations for executive chef Jesse Mendica), excellent wine list and great cocktails. If you were designing a restaurant to star in a movie, it would be Olive & Oak.

In 2017, Gioia’s Deli received a James Beard American Classics Award. For more than 100 years, Gioia’s has been making deli sandwiches, and if that isn’t enough of a draw, just know that people come from everywhere for the hot pastrami sandwich.

To experience more of the city’s diversity, add Balkan Treat Box (get the cevapi, a grilled beef sausage), Sameem’s Afghani restaurant (get the lamb in any form) and Sweetie Pie’s, a soul food destination for decades. Make time for the Schlafly Brewery tour, too, a St. Louis brewer that’s getting noticed all over the country.