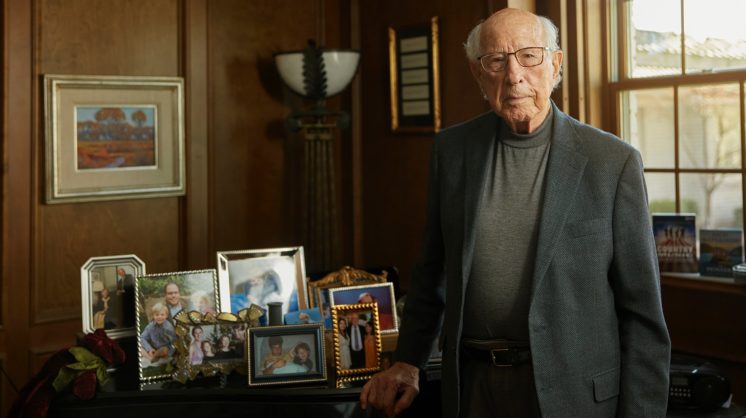 A few months after banker H.E. “Gene” Rainbolt was born in 1929, the stock market crashed. Several months later, dust storms enveloped much of his home state. Like so many Oklahomans growing up during the compounded disaster of the Great Depression and the Dust Bowl, Rainbolt’s worldview and his feelings about the state were shaped by those events.

“The fortunate thing about it is that I was born in Norman, which because of the university was the least affected by the Depression and the Dust Bowl,” Rainbolt says. “But all of my relatives were tenant farmers. And, you know, they had coal, oil for lights and wood for heating and well water that you drew in a bucket. It was a Third World way of life for all of Oklahoma outside the little cocoon in which I lived.”

Much as it influenced Rainbolt himself, that time of economic and environmental upheaval left a lasting mark on Oklahoma, both positively and negatively. Through his innovations in the banking industry with BancFirst, his philanthropy and his activism, Rainbolt is a witness to Oklahoma history, a major force in the state’s evolution and, on occasion, the dispenser of bitter pills. At 92, Rainbolt projects uncommon clarity when talking about Oklahoma’s future, because his recollection of its past is just as clear.

Even within the protective cocoon of a college town, Rainbolt was exposed to the privation experienced by so many Oklahomans. He remembers classmates in his grade school wearing clothes made from sackcloth and burlap, and seeing the so-called Hoovervilles spring up under the Norman water tower. At the time, more than a quarter of Oklahoma City and Tulsa residents were unemployed, and farm income in the rural areas plummeted 64 percent, catastrophic when 60 percent of people working in agriculture were tenant farmers or “sharecroppers” like Rainbolt’s extended family. 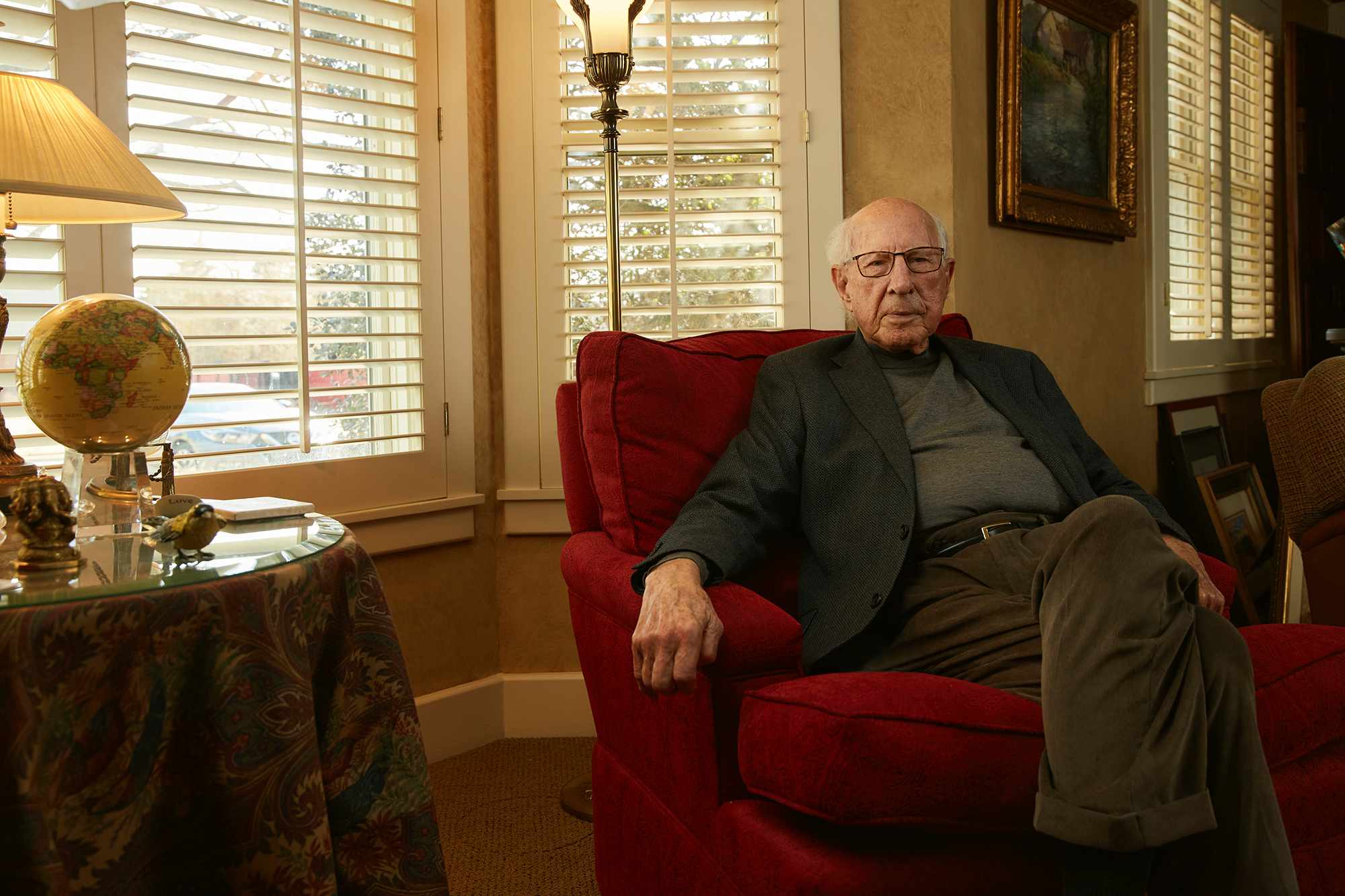 Rainbolt’s parents, Clarke and Bertie Rainbolt, were separated. His mother raised Gene and his three siblings, while Clarke Rainbolt worked in the wholesale grocery business, delivering groceries around the state. One of the company’s clients was the Civilian Conservation Corps, which put young men ages 17 to 28 to work building bridges, roads and lakes like Lake Murray near Ardmore.

All the young men were in camps and they got $25 a month, which they sent home,” he says. “And they were just in, like, barracks. It was just a way of life that today’s young people could not imagine. By the time I was 6 years old – not an exaggeration – I knew that whatever my life was to be was up to me. And I was doing something trying to create income. I was very, very young and I had jobs: grocery store, drugstore, a progressive set of jobs.”

Those experiences during his first decade of life powered him through the next 80 years. After earning his bachelor’s degree in finance from the University of Oklahoma, serving in the Reserve Officer Training Corps (ROTC) and marrying his elementary school classmate Jeannine Tuttle, Rainbolt served as a U.S. Army officer during the Korean War. During tours of duty in Korea and Japan, he saw people living in conditions similar to what he saw in Oklahoma in the 1930s – abject poverty brought on by war and its aftereffects.

After serving four years, Rainbolt returned to Norman and earned his master’s degree from the University of Oklahoma, then returned to the Pacific Rim to work as a civilian military employee. He closed out the decade by taking a position as senior vice president of First State Bank in Noble at age 30.

At the time, banking in Oklahoma was done under a set of outdated and oppressive regulations. For example, a single corporation was only allowed to own one bank and a drive-thru. While Rainbolt eventually took control of First State Bank in 1962 and proceeded to acquire banks in Purcell and Shawnee, he was also lobbying to modernize the state’s banking laws. Laws passed in the 1980s eased ownership restrictions, paving the way for Rainbolt to form the state’s first multi-bank holding company, United Community Corporation, and eventually BancFirst in 1989.

But beyond his success in banking, Rainbolt never forgot what he saw in his childhood, and when Oklahoma entered a long-term recession in the 1980s and 1990s, Rainbolt was working to create more opportunities for Oklahomans. While he is no longer part of the day-to-day operations at BancFirst, he is just barely retired, spending his time promoting improved educational opportunities, criminal justice reform and medical research and cancer treatment through his steerage and advocacy for the Charles and Peggy Stephenson Oklahoma Cancer Center and Houston’s M.D. Anderson Foundation.

“Cancer research is a big thing to me, because, No. 1, smoking still impacts so many Oklahomans,” Rainbolt says. “Neither of us ever smoked, but my wife died of lung cancer. So I’ve been very involved in Stephenson Cancer Center, which is one of our real successes in Oklahoma. To become a national cancer institute in the period of time we did is absolutely incredible.”

Rainbolt himself has enjoyed remarkable health over the course of nine decades, but last year he was hospitalized with a virus that was just starting to take hold in the U.S. In the late winter of 2019-2020, Rainbolt was battling a severe case of bronchitis, a by-product of his lifelong battle with the red cedar pollen that makes spring in Oklahoma a hellscape for allergy sufferers. And that was bad enough for an active 91-year-old man to endure, or so Rainbolt thought.

But then in mid-March of 2020, Rainbolt’s oxygen levels bottomed out.

“I just could not breathe anymore,” Rainbolt says. “So I went to the emergency room and, lo and behold, I had COVID before people were aware of COVID, really.”

Rainbolt spent 23 days in SSM Health/St. Anthony Hospital, fighting for each breath. He received constant oxygen and experimental doses of Remdesivir, the same drug administered to former President Donald Trump during his October 2020 hospitalization at Walter Reed National Military Medical Center. Breathing specialists regularly checked on Rainbolt, encouraging him to breathe in through his nose, out through his mouth.

In the earliest days of coronavirus treatment in the United States, there were few protocols for containing the virus and safeguarding those who were infected. Rainbolt’s son, BancFirst Executive Chairman David Rainbolt, said he was able to come and go at will in the first days of his father’s hospitalization, but as medical authorities learned more about how the virus is transmitted, the hospital went into near-lockdown to keep patients and visitors safe.

“Had it not been for my cellphone to continue to be in touch with some part of the world, I don’t know how, psychologically, I would have survived,” Gene Rainbolt says.

Rainbolt later learned that he had likely caught COVID-19 from his friend Charlotte Lankard, a marriage and family therapist who learned later that she had the antibodies for the virus. But as his son said, the worst part of the ordeal came after his hospitalization.

“At 91, if you lie in a hospital bed for two weeks, three weeks, you completely atrophy,” David Rainbolt says. “I mean, can’t even get out of bed.”

According to the National Institutes of Health, sarcopenia is the loss of lean muscle tissue experienced when the elderly are hospitalized or bedridden. More than 50 percent of those hospitalized after age 80 experience sarcopenia as a result of extended bed rest, resulting in the kind of catastrophic muscle loss that can only be rebuilt with extensive, long-term physical therapy.

For Rainbolt, this involved four to five therapy sessions per week.

“At first, we would work hard to walk across the living room,” he says. “And then, we walked across the room twice or three times over a period of weeks. And ultimately, when I gained some energy, my caretaker and I would walk a block and sit down, then walk another block and sit down and just incrementally add to it until we were without interruptions, walking two and a half miles a day, which I still do to regain both oxygen levels and energy. It was a month of recovery. Everybody experiences the same thing that has severe COVID.”

When Rainbolt contracted the virus, Oklahoma was experiencing about 25 new cases of coronavirus per day. At the time of his interview with 405, Oklahoma’s daily case count had ballooned to 6,487. While numbers in the state have since gone down, due in part to vaccine access and improved social distancing, Rainbolt is concerned with many Oklahomans’ reaction to mask requirements and vaccine distribution.

Rainbolt said the skyrocketing Oklahoma cases in early 2021 were partly the result of the state’s tradition of “rugged individualism,” a set of behaviors that, at best, results in pioneering work that makes lives better, or can get someone through a major economic downtown. On the downside, rugged individualism can result in obstinate ignorance, refusal to wear masks and flouting local social distancing rules.

In Rainbolt’s view, Oklahoma is up to its panhandle in rugged individualism. He said that if the state is going to improve its criminal justice system, its financial diversity and its overall health in the wake of significant challenges on all of those fronts, it needs to be far less rugged in its individualism, especially during global health crises.

“I think it’s revealed some of our weaknesses,” he says of the pandemic. “It’s been a devastating thing, and continues to be. There’s going to be good change coming out of it, too, forcing change in the way we work, the way we educate. It has sped up, materially, the use of technology in both working and teaching.”

Now 92, Rainbolt is still working and, in his own way, teaching. Over his near-century of life in Oklahoma, he has worked to improve the state’s quality of life and witnessed its greatest struggles and successes. What he sees now in Oklahoma’s present and future is a kind of realignment of the state’s population. With more business development and rural residents seeking opportunities in Oklahoma’s urban centers, Rainbolt said the state could be on the verge of major change.

“The rural areas simply do not provide the opportunity to participate in the world of technological change,” Rainbolt says. “If you went to Siberia — and I’ve been to all these places — if you went to China, if you went to India or you went to Colorado, it’s the same phenomenon.

“And one of the things that’s happening now, as people move to the metropolitan areas, it will be interesting to see how redistricting can take place,” he says. “Because if the two metropolitan areas were to decide, ‘We’re going to exercise our influence,’ then the progress in Oklahoma would very quickly speed up.”