Get Comfortable at The Press - 405 Magazine 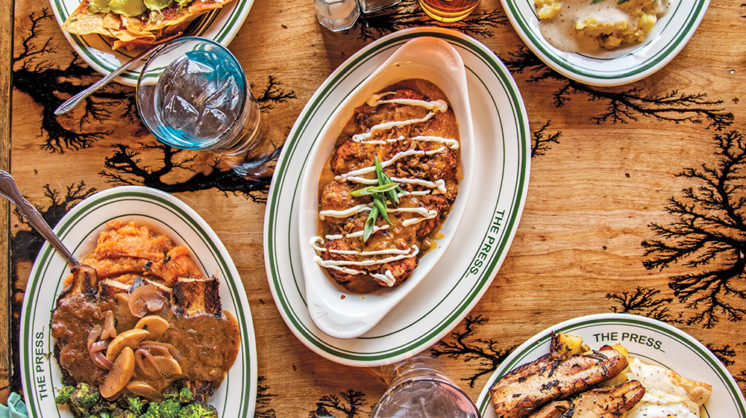 February requires some willpower to get through. Those who made health-centric resolutions for 2018 are trying to stay their leafier, greener course, and almost all of us are trying to endure the depths of winter – January is technically colder, but we still have some momentum from the holidays remaining to help get us through it – until March reminds us that spring is coming. Something warm and hearty in the way of food is always a good idea about now, and if the menu in question includes some healthier options, so much the better. With that in mind, this is an excellent time to visit the newest star to swell the constellation of great dining in the Plaza District: The Press.

But first, you have to find it. The restaurant is tucked away in an old building at 1610 N Gatewood, about half a block south of the Plaza’s main drag. With that principal stretch so full of local businesses and housing crowding both ends, this is a good sign for the future growth of the district, as it indicates a move to broaden development beyond NW 16th. For now, The Press is unobtrusive enough and sufficiently removed from the neighborhood bustle that it takes a bit of finding, but also feels like a secret about which you’re in the know.

Named for the printing business that once filled the building (after it originated as a garage), it’s a handsome space, roomy and instantly welcoming. All the textures feel perfectly in sync, from weathered concrete floor to wooden chairs to tin ceiling crisscrossed with strands of dangling lightbulbs. Whether you find yourself in the main area or the smaller annex on the south side – both of which have multiple tables and separate bars – you’ll get a hefty dose of natural light in a comfortable setting … and hefty helpings of comfort food.

For a perfect example, start with the house tots. They’re roughly spherical, like hash brown hush puppies, and dense with cheese, served smothered in gravy. True confession: Despite being an Oklahoma native, I’ve never been big on gravy – but this version could turn me around. Tender, juicy fried chicken, a massive chicken-fried ribeye and a dynamite execution of biscuits and gravy with eggs and pork belly continue the hit parade of familiar favorites.

On the other hand, the kitchen can be kind to diners seeking something more diet-conscious: Those biscuits and gravy are only one of the dishes that can become vegan-friendly with a mere word to your server, or breakfast-lovers can dip into a big, steaming bowl of quinoa oatmeal. And there’s all kinds of goodness in the Beans and Greens, a kale salad colliding with a combination of pinto and black beans, bell peppers, corn and quinoa. 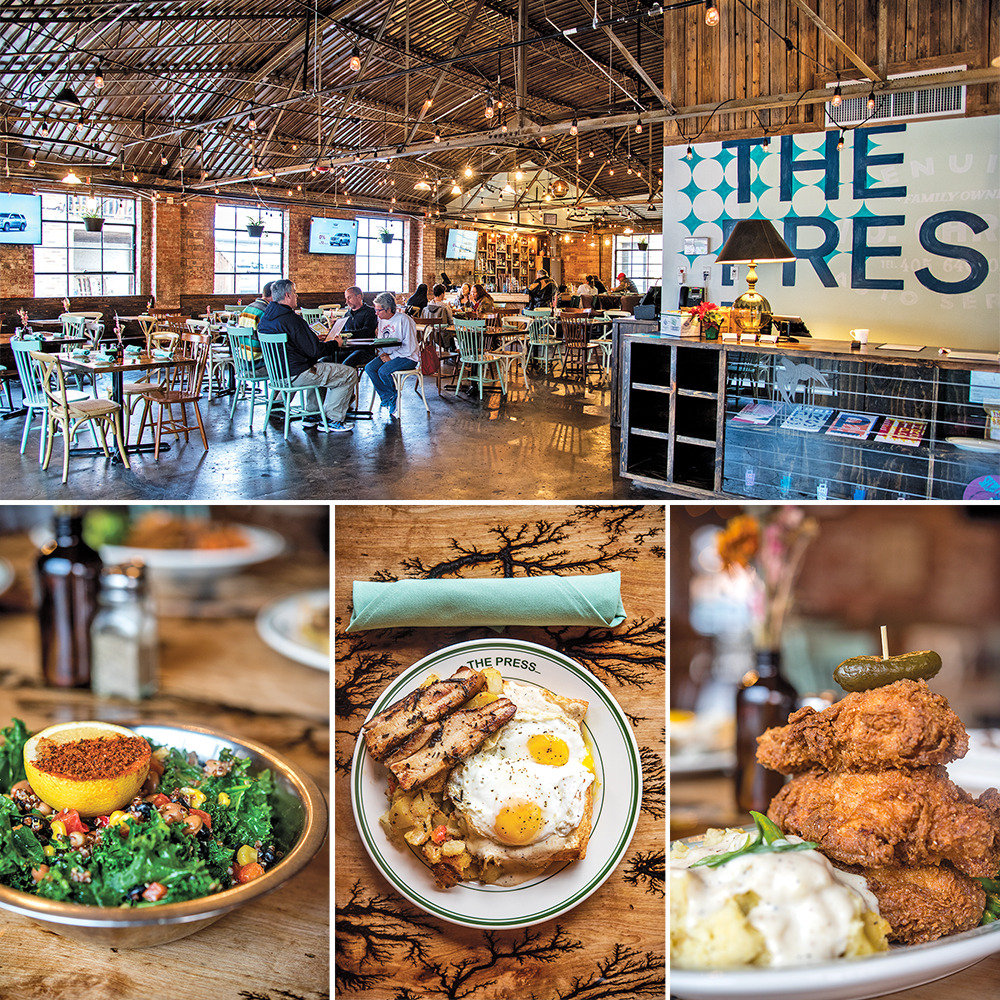 To be frank, I’m stumped for a single recommendation. As we were moving around the table and sampling this dish or that, I kept coming back to take another couple of bites of the very-much-not-messing-around buffalo mac and cheese (the boneless chicken bites’ sauce is delightfully strong) … but I could say the same about several other options, as well. The chilaquiles are fairly simple – chili sauce on chips with eggs and cheese – but filling and delicious, and the same goes for the more complex grilled strips of pork belly laid on a bed of mashed sweet potatoes, then slathered (a good verb when discussing comfort food) with an outstanding candy apple bacon gravy.

In discussing this, the operating team’s third restaurant, co-owner John Harris described the feeling of bringing its concept to life by comparing their projects to working within picture frames: with The Mule, the “frame” was sandwiches; Anchor Down is a bar with corn dogs. Taking on The Press and its more complete menu means they’re painting in their biggest frame yet. “We feel like this is our first real restaurant,” says Harris, “and it’s been really fun for us.”

He shared my difficulty in selecting a singular favorite item, musing that “one thing we wanted was to have brunch options anytime” while mentioning the breakfast hash, but then changing tacks to praise the veggie burger, and continuing to tout three dishes, then five. Finally, he shrugged and said, “Our biggest thing is to make the food good, and to be really nice to people.”

We encountered a surprisingly big crowd in the middle of a chilly Tuesday afternoon – which makes me think that The Press has caught on pretty quickly, and that OKC crowds are happy to find a haven to cozy up in and relish some comforting cooking. It may be cold outside, but you should squeeze a visit into your schedule.