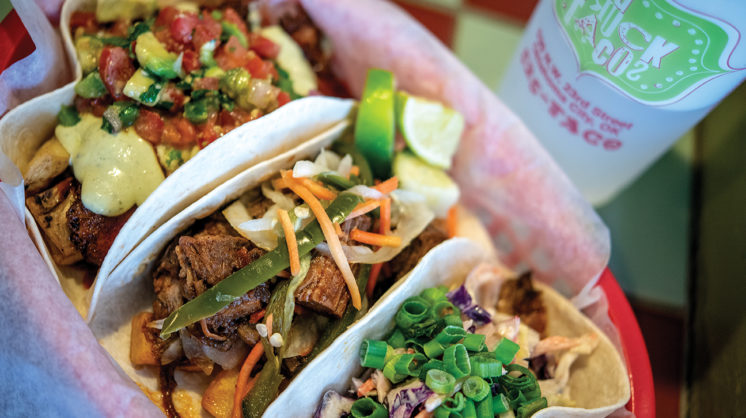 An OKC treasure, and one of the prime movers of the NW 23rd renaissance, is about to mark its 10th anniversary; the ideal way to celebrate seems like it should be to give yourself the gift of tacos. (Note: That’s also the ideal gift to celebrate an 11th anniversary, 2.7-year anniversary, Flag Day, the Ides of April, any given Thursday, etc.) A decade after opening its doors at 530 NW 23rd, it’s still wildly popular – it’s rare to find a parking place anywhere close during peak hours – and Big Truck Tacos remains as much a must-try as ever.

Credit the reliable execution and inventive imagination of the varied menu; from the Rancher’s braised brisket and potatoes to the zippy marinated tilapia of the Okie Wahoo, seemingly every option is tempting. They also have a pretty impressive vegetarian selection – I’m a dedicated carnivore, and I’m still partial to the texture and taste of the Crispy’cado’s breaded and fried avocado nuggets.

And even if you’re dedicated enough to work through the whole menu, there are always more surprises in store. Big Truck has a menu option I’ve never encountered elsewhere: The 5th Amendment is a chance for chef/owner Kathryn Mathis to show off her range via daily mystery. They won’t tell you what’s in it, even after you order, but it’ll be filled with creative, well-balanced flavors … the sort that have kept taco-loving fans coming back for a decade now, time after tasty time.