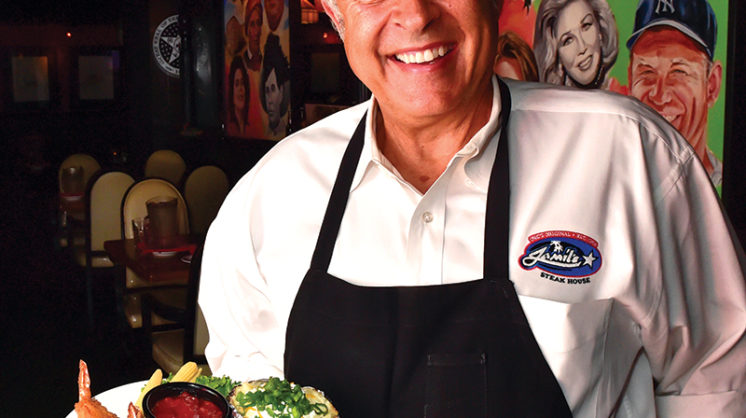 Thousands of sonic booms rocked the skies of Oklahoma City for months; OU under new head coach Gomer Jones introduced the Sooner Schooner; Lyndon Johnson was about to wallop Barry Goldwater; Tom and Judy Love opened a single gas station in western Oklahoma. The year was 1964, and Jamil’s Steakhouse opened its doors for the first time.

Oklahoma City has ebbed and flowed, endured busts and relished booms since then, but the cozy dining spot on N Lincoln remains a favorite for state legislators, luminaries such as Barry Switzer and regulars looking to enjoy a sumptuous meal. And Jamil’s is still a family affair, as Greg Gawey is celebrating his 40th year as owner after taking over the restaurant from his uncle, Jim Elias. The general manager, Dianne Moentnish, has been there for about 30 years.

Plus, the steaks are still Angus beef – take advantage of the early bird special (served 5-6:30 weeknights) to get a 12 oz. KC Sirloin or hand-battered, butterflied jumbo shrimp for $25.95.

The steaks are no slouches, so it’s also impressive that Jamil’s might be equally renowned for its accouterments. All entrees are served with a hefty assortment of complimentary appetizers: house-made tabouli, hummus, a relish tray and crackers, cabbage roll, baked potato and a portion of smoked bologna (which is a specialty of the house all by itself).

They’re so good, and so filling, that you can even make a meal of them – Jamil’s Hors d’Oeuvre Sampler includes the tabouli, hummus, cabbage roll and bologna, plus pita bread and pork ribs.

We’ve said it before and we’ll say it again: The classics never go out of style.