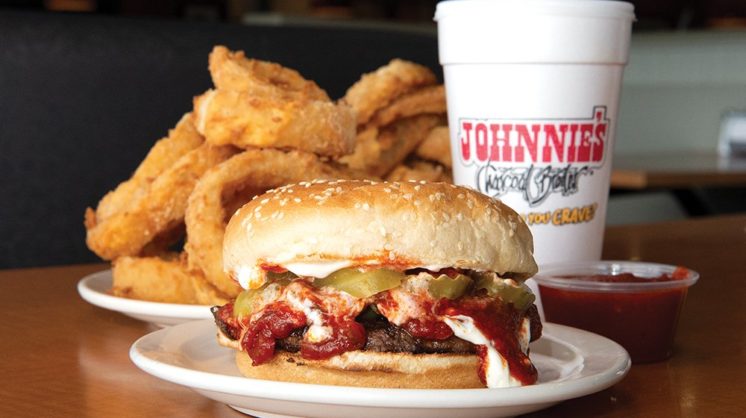 OKC’s culinary landscape has steadily grown broader and more cosmopolitan over the past couple of decades, providing diners with possibilities from ramen shops to a Brazilian churrascaria to really excellent Irish pubs. But with Independence Day lighting up the calendar, this seems like a good time to concentrate on the iconically American hamburger, especially a variant with local roots. Let Philadelphia have its cheesesteaks and New Orleans its muffulettas – central Oklahoma gave the world the Theta Burger.

It’s a standard beef patty – although for authenticity’s sake, it should be cooked over charcoal rather than on a griddle – topped with pickle chips, mayo, optional shredded cheese and the semi-secret ingredient: tangy hickory sauce.

Both eateries that helped introduce this innovation, Norman’s Town Tavern and the Split-T on Western, have since gone to the great Restaurant Row in the sky, but the Theta Burger (which is commonly agreed to be named for an OU sorority) lives on. In fact, Johnnie Haynes managed the Split-T for nearly two decades before founding his own restaurant, and Johnnie’s Charcoal Broiler has been dishing up Thetas since 1971. There are now eight Johnnie’s locations metro-wide, give or take the one on the NW Expressway that’s closed for renovations and classier spinoff Urban Johnnie’s in downtown, and each one has the flavor combination that helped make them an Oklahoma institution.

Even emigres continue craving the Theta taste: Photographer Shannon Cornman said her sister moved to Seattle years ago, but Johnnie’s is still her first stop when she comes back to town, and she routinely takes a container of the hickory sauce back to Washington with her. Since you’re already here, grab a #9 with onion rings and savor a classic.