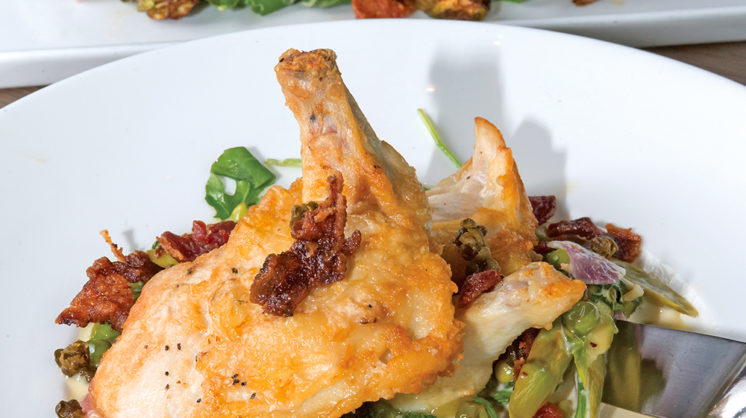 The world’s smallest country is Vatican City, not the restaurant at 5830 N Classen, which means Republic Gastropub is not really a sovereign nation. Of course, that also means you don’t need a passport to sample its native cuisine.

An OKC local asked about Republic would probably mention the extensive beer menu or the burgers – they’re noted for both, and justly so – but if you find yourself in the mood for something a bit more varied, don’t dismiss this spot out of hand. Casting an experimental eye over the menu reveals quite a few adventurous possibilities.

Case in point: the roasted chicken with peas, asparagus and prosciutto in a light cream sauce. It replaced a previous preparation that was a more traditional half chicken, but wasn’t nearly as artfully prepared and required more work from the diner; this delicious reimagining is more akin to a boneless breast.

Also far from traditional is the grilled shrimp salad; you might have heard those words before, but you’re probably not imagining a combination that includes charred Brussels sprouts, spaghetti squash, a dab of Gouda, a subtle horseradish vinaigrette and even crisply fried salami slices.

Republic’s sleek, bustling vibe can get a trifle noisy, but it’s great for group celebrations, especially if those include an event on one of the two-dozen-plus screens of various sizes. (cough, cough Thunder games). Round up some friends and declare yourself a citizen, whatever you’re in the mood to try.