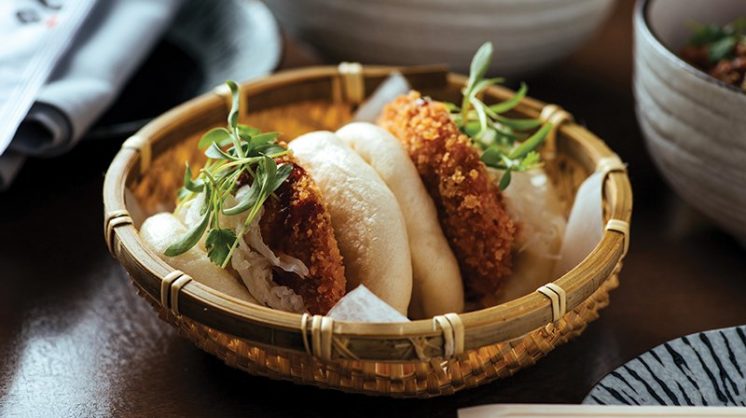 Once upon a time, after she finished college but before my niece was born, my sister spent a few years teaching English as a secondary language in Japan (Chiba, right outside Tokyo). As interesting as it sounded, I never went to visit – not because it’s a long trip (it is) or I didn’t want to see Japan (I kinda did) or even because I didn’t have a passport (I didn’t, but I could have gotten one). It’s just that … well, the average height of Japanese males is about 5’7” and the country’s crowded, dense urban centers aren’t designed with a lot of extra head room for people who are 6’6”. I quite literally wouldn’t fit in Tokyo, but it turns out I could be right at home in Goro.

A recent addition to the eastern periphery of the Plaza District, Goro Ramen is an izakaya, an informal Japanese pub. It’s sparsely furnished but stylish, with a crisp modern feel thanks to the visible pipes on the ceiling, stained concrete floor and geometric patterns on the wall. (And the ceiling’s a bit low, which is a nice if possibly unintentional echo of Japan.) Like most bars in Oklahoma, there’s a big TV on the back wall … although it was probably the only bar in Oklahoma showing Yasujiro Ozu’s masterpiece Tokyo Story. The effect is barely spoiled at all by having Queens of the Stone Age coming over the sound system rather than a shamisen.

I counted about 50 seats in a mixture of tall tables, booths around the perimeter and stools at the bar – that’s where I’d recommend you sit if you get the chance, so you can watch the cooks at work, although you may have to rely on luck given how busy Goro has been since its opening. They don’t take reservations, but you can check in and wander the Plaza District a bit; they’ll text you when your table is ready.

The menu isn’t large, and a lot of its variety comes in appetizers ranging from sizzling wings to a Brussels sprouts salad with beets, peppers and mint. The nikuman, or buns, are a particular pleasure – the chicken version’s bun is epically soft, the chicken perfectly tender under its crunchy panko coating and the gochujang spicier than it might seem at first blush.

On the other hand, chef Jeff Chanchaleune’s favorite thing on the menu is the cauliflower – citing its carefully planned balance of textures and tastes, he says, “It took me a while to get it where I wanted it, but I’m really proud of it now.” And considering that the preponderance of people aren’t likely to go looking for cauliflower laced with an anchovy sauce, its popularity is a testament to his skill. I can’t remember the last time I ate cauliflower on purpose – in my mental dossier it’s listed as the less appealing cousin to the already dire broccoli – so it should carry some weight when I say that this dish is genuinely, perhaps even startlingly, good; tender without being soggy and tangy with just a faint hint of crunch from the bonito flakes. 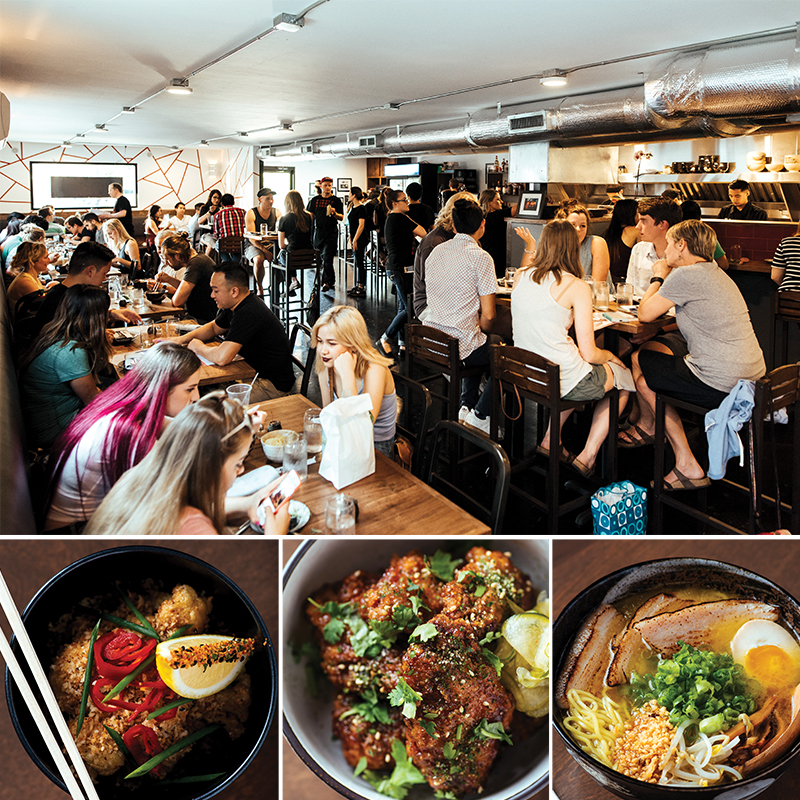 The ramen itself is a completely different animal from the 20-cent packages of cardboard shavings and salt water that keep college students from starvation; the Tori Paitan’s broth is silky and savory and filled with character, as the bowl is filled with slices of pork belly and half a boiled egg and additonal treats. Other variants include a spicy version with pork meatballs and corn or a vegan one with tofu and roasted mushrooms, plus the occasional special such as a chilled tomato version with shrimp.

Goro is also a great spot for drinks – our server stressed that the cocktail list is fairly small but carefully assembled, and I can vouch for the pineapple-ginger punch of the Mr. Oh or the marvelous aroma of the Pai Mei thanks to its dose of matcha powder from Urban Tea House. And if there’s poetry in your soul, you should find the presence of sakes named “Tears of Dawn” and “Hawk in the Heavens” wonderfully tempting.

One final word of advice, and I say this knowing Pie Junkie is right across the street: Stay here for dessert. The poppy seed mochi cake comes in soft, warm, luscious cubes that are topped with a pineapple compote and a heavy whipped cream redolent with cardamom and yuzu. Completely delicious, light on the palate and also refreshingly distinctive – you can always get some pie to take home with you.

It’s already a pleasure to visit these tastes of Japan, and as the weather cools off it’ll only grow more enticing. To put it in the form of a haiku,