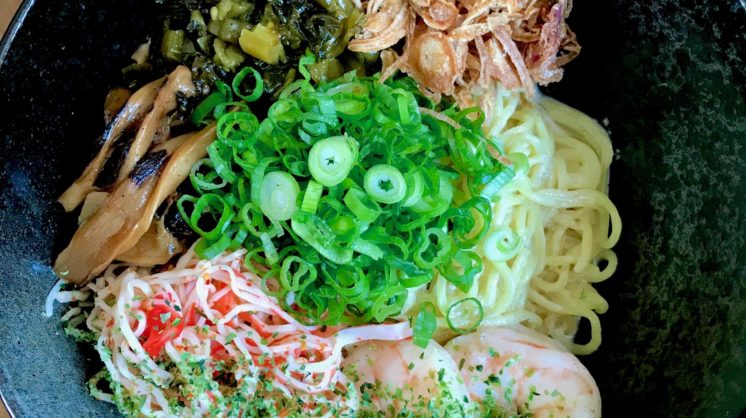 Chef Jeff Chanchaleune introduced Oklahoma City to cold ramen last summer as a way to enjoy the popular dish even in the hottest months. The executive chef and co-owner of Goro Ramen in the Plaza District is serving a variation of Hiyashi Chuka, a traditional chilled ramen dish, typically served in the summer in Japan.

“It’s a summer dish, but we have it available year-round,” Chanchaleune says, “and in spite of the heat, we still sell more house ramen than chilled in the summer.”

The chilled ramen is made from the same noodles as the house ramen, but instead of a broth, Chanchaleune tosses the noodles in a sesame paste called Neri Goma that is similar to tahini. He seasons the paste, and then adds one ladle worth to a bowl – then customers toss the noodles and other ingredients at the table.

The standard bowl comes with shrimp and Surimi (imitation crab made from white fish), as well as fried shallots, greens, bamboo and green onions. However, the sauce is vegan, so vegetarians and vegans can order the dish with tofu and roasted tomatoes instead of the seafood.

In Japanese cuisine, it’s traditional to use the sauce with vegetables such as okra or with blanched spinach, but for now Chanchaleune is using it only for the chilled ramen. The nutty, savory sauce pairs well with some alcoholic beverages – he recommends a dry sake or light beer such as Asahi.

Goro customers often order a supplementary chili bomb – it’s one of the restaurant’s most popular options – to customize the heat level of their broth at the table, but it’s a little more difficult with chilled ramen.

“With a broth dish, it’s easier to balance things out,” Chanchaleune says. “You have to be more careful with the chilled ramen, though. Add it slowly and taste. It still works, but there is no broth to offset the heat and acidity.”

The chilled ramen is a similar price point to the house ramen options, and unlike the house ramen, it’s much easier to grab to go. Next time the heat outside gets oppressive, consider embracing this chilly option.