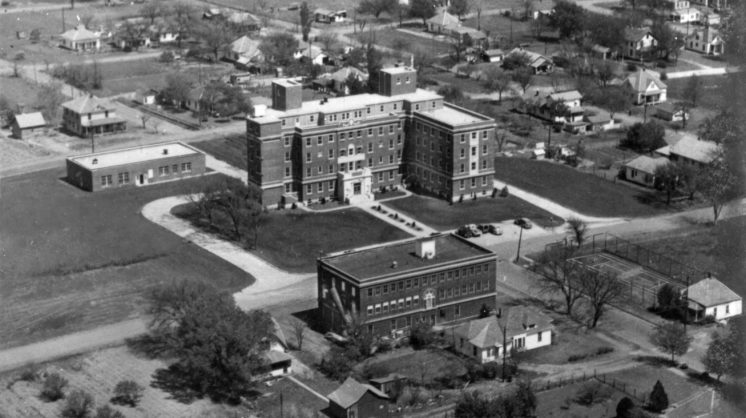 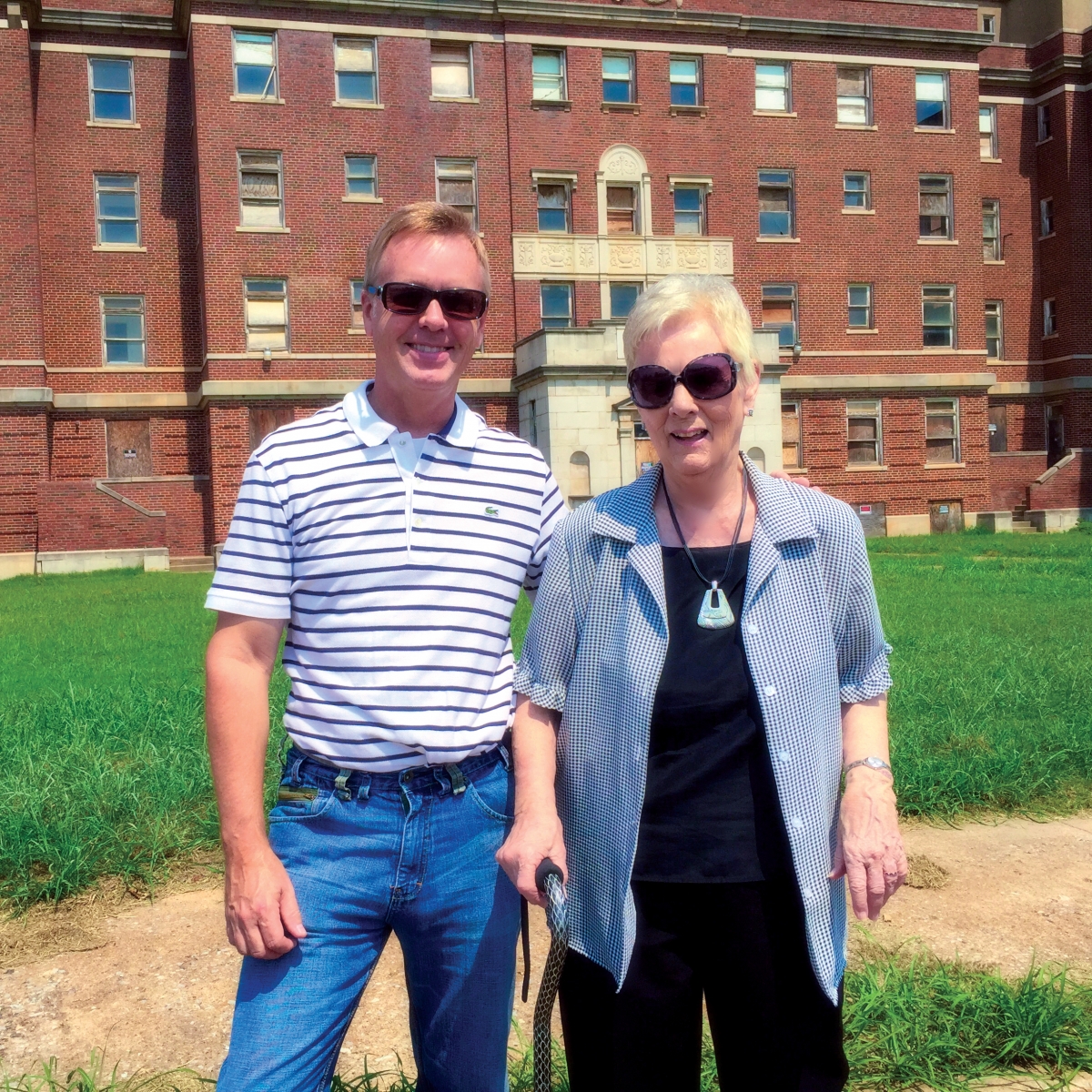 A few years ago, on my birthday, I decided to drive over to Guthrie and see the old hospital, so Mom and I got in the SUV and headed down State Highway 33.

“When your dad was driving me over that night, we got to this curve and I thought I had waited too long,” Mom reminisced. “They took me right up to the delivery room, and you were born just after midnight.”

On this hot September day, we pulled up in front of the dilapidated old building on W Warner. An old red Jeep came bouncing up – Matt was meeting us to take our photo, in those days before selfies.
“There she is, Bubba,” said Matt, referring to the spooky-looking structure. (“Bubba” was Matt’s term of affection since our college days.) The windows were broken, grass and weeds were overgrown and the brick façade was crumbling, but the art deco design was still incredibly beautiful.

Matt took a photo of Mom and me, cheesy smiles and all, standing out in front, and it became a ritual every September for more than a decade – Matt, Mom and me. So if you see us posing for photos outside the new/historical apartment complex in Guthrie this month, please stop and take part in our sentimental journey.

One of Oklahoma City’s trendiest overnight spots is 21c Museum Hotel in Film Row. Its general manager Matt Cowden, happens to be an old college buddy of mine. Every day, Matt makes the trek into Oklahoma City from his home town of Guthrie. The city is special to him – and to me, as well, since I was born there in 1963. In fact, the old Benedictine Heights hospital was the birthplace to a generation of Baby Boomers from Logan, Kingfisher and Oklahoma counties.

Construction on Benedictine Heights began in 1926, but because of the Great Depression, it wasn’t finished until 1948. Back then, it was state of the art. During the ’70s, however, Guthrie had its own version of “Urban Renewal” and abandoned the hospital for a shiny new one on the city’s west side. The stately old building was shuttered in 1978 and sat empty for 40 years, steadily growing more forlorn.

Then one morning in 2017, I got an email from Matt – reading “Dude! Look at this!” – with a link to a story in the Guthrie Daily Leader. The article said the old hospital had been sold and was about to undergo a major renovation. It would come back to life as an apartment complex for those 62 years and older – ironically, the same age group as those who had been born there decades earlier.
Construction began, and Matt kept me updated on the progress. A little less than two years later, the “Villas of Benedictine Pointe” opened to the public.

Matt couldn’t make it, but early this spring Mom and I were some of the first guests to tour the shiny new facility.

Entering through what was once the ER on the north side, we made it up to the second floor, which in 1963 had been the maternity ward. Mom pointed the way to where her room had been located. We entered the cozy little apartment, but nothing looked familiar until we got to the bedroom.

“This is it,” she said matter-of-factly. “This was our room. Children weren’t allowed in the maternity ward back then, so your Grandma Beutler was standing right there on the lawn with your sister and brother. I held you up to this window, so they could see you.”

Villas Resident Manager Brittany Timmons said that since its re-opening, she has heard from many people who were either born there, gave birth there or were employed at the hospital.

“They are all so very pleased it has been revamped and is no longer sitting empty,” she says. “We have a total of 53 units, and 18 have been leased. Our tenants truly love living here, and we are so happy to have them. Guthrie is a wonderful small town, lively with entertainment. We are so proud to call Guthrie home. The hospital had a rough beginning and a rough middle, but it is going to have a happily ever after.”