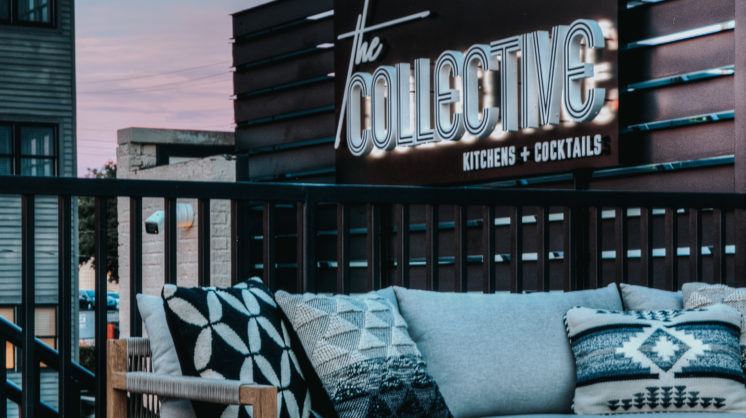 The food halls have arrived, and downtown’s dining options increased dramatically as a result. The Collective and Parlor opened about a month apart—the former in August and the latter in September. The Collective occupies the old automotive repair facility on the southwest corner of NW 10th and Harvey, while Parlor is east of Broadway on NE 6th. Both have limited parking, but that hasn’t slowed the response noticeably.

With an interior capacity of 487, The Collective can easily host well over 500 guests, thanks to two outdoor seating areas. (Outdoor seating is not counted in fire safety assessments, for obvious reasons.) Operating partner Truong Le said their initial numbers on Friday and Saturday nights show that OKC has turned out in staggering numbers.

“We’re turning the seating three times,” he said, meaning that upwards of 1,500 diners, drinkers or both are coming through on weekend evenings. “We won’t have hard numbers until we get through all four seasons to see how it affects traffic, though.”

The Mother Clucker, at Parlor

Given that a popular restaurant might serve 200-225 customers on a Friday night, these numbers are astounding—more in line with an outdoor venue like Bleu Garten. The trajectory of a restaurant’s life can include a burst of new customers, but the new eventually wears off. Both food halls are taking steps to keep things fresh. Parlor concepts have contracts that last from one to three years, depending on circumstances, and The Collective plans to rotate concepts every year.

“We want people to have new choices, to get excited about new options here,” Le said.  “We can also make changes as necessary, because everything won’t necessarily work.”

In fact, The Collective closed its coffee shop concept in less than two months. That kind of flexibility gives customers confidence that they’re getting the best options available, and it provides more opportunities for concepts waiting to incubate their business ideas. Already, Bowls & Berries, a new smoothie and acai berry bowl concept is set to go into The Collective next to Theo’s Donuts.

Giving customers multiple options, and giving local eateries an incubator space makes the food halls a solid choice for both groups, and both the food halls have strong local representation. Parlor has three Kansas City concepts and four locals, while The Collective has only one non-local, a waffle concept from Dallas.