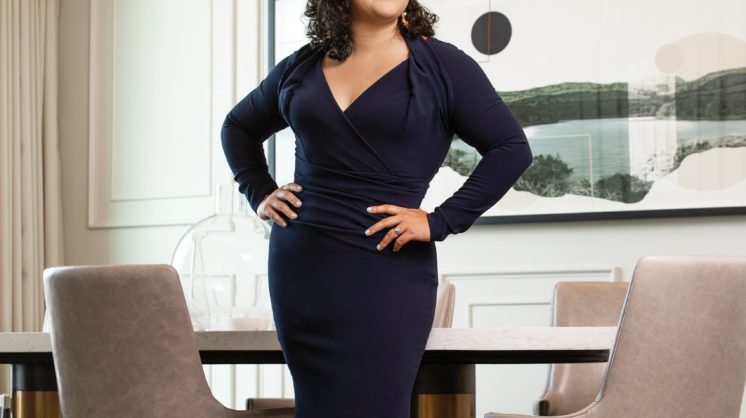 “The breadth and reach of the impact Elizabeth has had in about 10 short years is incredible, far-reaching, and impactful. She has helped so many young people pursue their dreams of higher education, solely because she has the human understanding to stick with it and that goal is achieved! She is never happier than when she’s serving others. There is no amount of money on this earth that could persuade her to give up public service forever.”

Elizabeth Larios on-paper and Elizabeth Larios in-person are two different experiences. When you read about all of her accolades and accomplishments, you expect to meet someone more serious, ostentatious. But in reality, being around her is like experiencing sunshine. She is warm, welcoming, and hilarious. It is not a surprise that she once dabbled in standup comedy. You get the sense that she is used to being the life of the party.

Over the last few years, she has become one of the faces of the Hispanic community in Oklahoma City. She is currently the executive director of the SW 29th Street commercial district, and co-founder of an international nonprofit, Rehoboth Care Mission. On any given weekend, you can find her volunteering or serving on a public art committee. She is on the board for Inclusion in Art and is a Hispanic Chamber Ambassador. Larios’ goal is to spread the word about resources and opportunities in order to help the community reach equity and inclusion.

“I am creating a place for Hispanic community members to feel welcomed and a part of something special, and empowered to lead any development efforts in our city,” said Larios. “I believe I am including and engaging people groups that might have previously never been asked for their input. I know I am not the only new leader that thinks this way in our city, which is why it is exciting to be a part of the future in OKC.”

She is the youngest of five children of Mexican-American immigrants who came to this country to pursue success and happiness. She takes great pride in how hard she’s seen her parents work. While her mother was granted citizenship, her father was deported to Mexico. The family has tried three times over the course of 10 years and spent tens of thousands in lawyer fees to allow her father to come back, repeatedly being denied. Their family has decided to make the best of a hard situation and live separately in two different countries. Larios said, “We have this really complicated Mexican-American story and there’s so many elements to it. But that’s just one family in this whole area. And I can tell you that it’s that way for every Hispanic family.”

“I love to bring people into the mix. That’s really what I advocate for. The Hispanic community is such an important group to advocate for, so I’m happy to put on that hat.”

Like many current Oklahoma City visionaries, Larios believes the metro is going through a renaissance. ““I love the opportunities that are here. I love that if you truly want to be involved, you’re probably one connection away from doing whatever it is that you’re wanting to do. I really hope to see a lot more development in South Central Oklahoma City, but I also hope that the development is really inclusive of the people who live there in a really different way. I hope to see the renaissance continue, but to be inclusive of more people in a really intentional way, and I think I can be a part of that.”