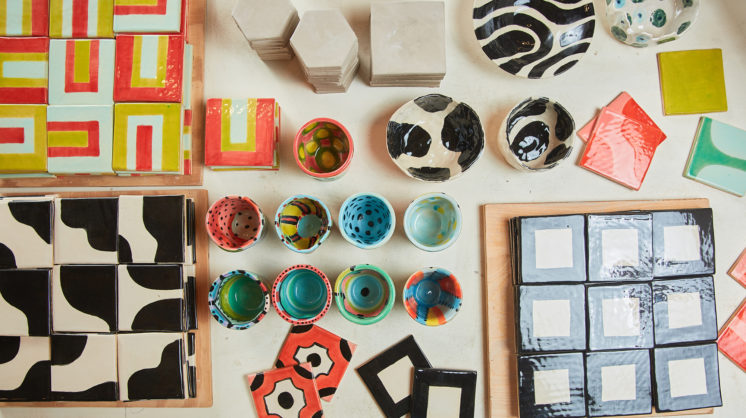 Born out of the pandemic, tiles are a second act for Jess Chamberlain.

“I feel like I’ve lived several lives already,” she mused. “We’d been flipping houses — still do — and vintage Land Rovers. I was looking for what to do next, so my husband, kids and I moved to Italy for three months.”

After returning stateside for some time in Boise and San Diego, the Chamberlain family relocated back to Oklahoma City … on the day of the COVID-19 quarantine emergency order. A coincidence of unexpected value, as she found herself with the opportunity to start anew.

“In another life, I would paint tiles in Morocco; why am I not seizing the moment?” she pondered. And so she did. She’s not in Morocco, but she seized, nonetheless. With one eye on her past and one on her clay-covered future, Cold Butter Studio was born.

“The name came from me making scones and biscuits with my kids. We joke that the secret ingredient is cold butter,” Chamberlain said. “The blocks of clay that I use for the tile look like big sticks of butter before they are shaped and fired in the kiln, so it seemed like a perfect fit.”

Creativity is often a team effort in Chamberlain’s studio.

“My husband is great on the pottery wheel. He’ll throw bowls and cups, and I glaze them, so we’ve created this small housewares line out of it — unique, one-of-a-kind pieces.”

She also works with a welder to create unparalleled furniture pieces. A quick scroll through Cold Butter’s Instagram (@coldbutterstudio) will showcase an array of their collaborations, brilliant in both color and concept. When asked if the art she enjoys and the art she produces align, her answer is a quick, definitive “Yep.”

“The art I’m drawn to is always so colorful. I just got tired of seeing so many neutrals because it felt like the personal touch was lost,” Chamberlain said. “I like eccentric art. Hand-drawn. Imperfect touches.”

Those imperfect touches are stunning symbols of a small-batch creator’s character. They are representative of an artist who is, first and foremost, driven by her vision, and trusting the sales to follow. Chamberlain had a close-up view of that expressive and undemanding way of life — one notably devoid of mass consumerism — in 2017 while on a drive from Paris, France, to Palermo, Italy.

“That slower way of life was [an] inspiration. So many people there have a craft: They bake bread, they make things. And they’ve been doing these things forever, which inspired me to find that thing that I could do long term — that thing that I would really love and would be a part of my family’s story,” she said.

George Eliot once said that it’s never too late to be what you might have been, and Chamberlain is embracing her role as a creator. She is an artist in pursuit of her soul goal. A visual storyteller. A woman leaving a legacy, one hand-painted tile at a time.