Hitting All the Notes - 405 Magazine 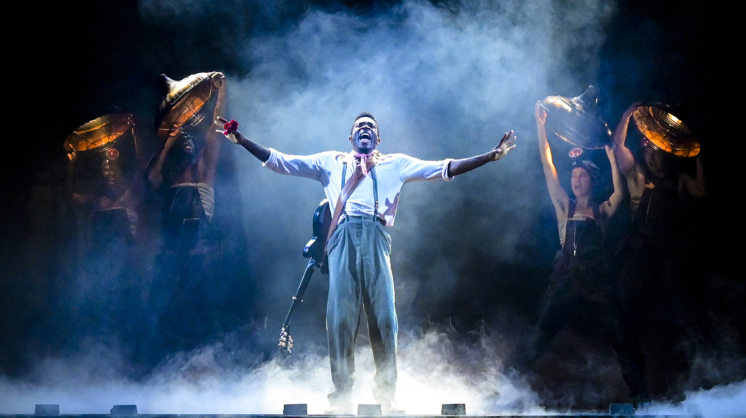 OKC Broadway has already raised the curtains on its 2022-23 season. The theater program returned to the stage in September with Hairspray. This upbeat musical had audiences rooting for high school dance fan Tracy Turnblad as she fights for racial equality in 1960s Baltimore. Fans of RuPaul’s Drag Race might have recognized Nina West from season 11 as the iconic Edna Turnblad, a role originated by drag queen Divine and made famous by Harvey Fierstein and John Travolta.

Hadestown, the winner of the 2019 Tony Award for Best Musical, took the stage in October. Through soulful music sung by an incredible, diverse cast, Hadestown is a retelling of the ancient Greek myth of Orpheus and Eurydice. After bringing two award-winning musicals to the 405, OKC Broadway has more entertaining acts to follow.

The musical Tootsie, based on the 1982 film starring Dustin Hoffman, runs from Nov. 15-20. This production tells the story of a struggling actor who lands the role of a lifetime — starring in a new Broadway musical. With a Tony Award-winning book by Robert Horn and a score by David Yazbek, Tootsie is known for coming at the audience with tons of jokes and physical comedy and will be great fun for kids aged 10 and older as well as adults.

Andrew Lloyd Webber’s Cats is the first season special, running Dec. 30 to Jan. 1, which is a purr-fect way to start 2023 … after all, Jellicle cats meet once a year. The second season special is The Book of Mormon, written by South Park team Trey Parker and Matt Stone along with Robert Lopez, is coming January 13-15. Credited as being one of the most successful musicals of all time, The Book of Mormon tells the story of a pair of missionaries who are sent to a remote Ugandan village and the hilarious antics that follow. This show has themes that everyone can relate to, regardless of religious beliefs. But it does contain some strong language, so it’s most appropriate for ages 13 and up.

From Feb. 14-19, OKC Broadway presents rock opera Jesus Christ Superstar, in its celebrated 50th anniversary production. One of the most spectacular and emotional shows of the season, this Andrew Lloyd Webber smash hit tells the story of the last seven days of the life of Jesus as seen through the eyes of Judas.

Following is the show all parents have been waiting for — Disney’s Frozen will finally arrive at the Civic Center March 22 to April 2. Join princesses Elsa and Anna as they learn to be bold and courageous and, of course, find that sibling love trumps all.

The season wraps up with the return of Hamilton, May 24 to June 4. If you somehow missed the acclaimed musical when it was last in Oklahoma City, here is another chance to see the magic in person. Alexander Hamilton is arguably one of the most influential founding fathers, and Lin-Manuel Miranda brought him back to life with perhaps the biggest musical of our generation.

For more information on this season’s musicals or to purchase tickets, visit okcbroadway.com