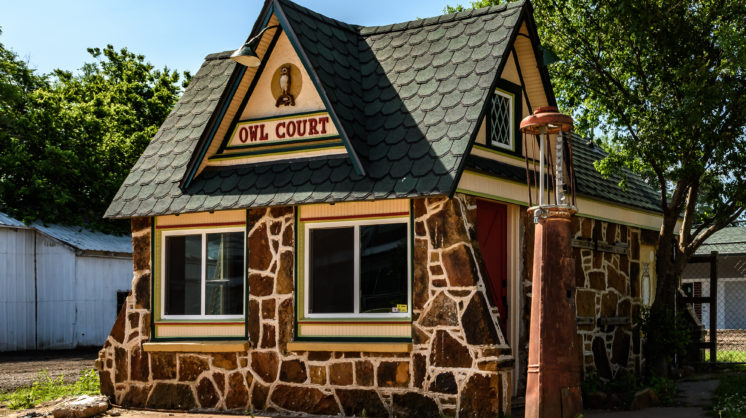 It sat empty for decades, a vestige of a long-gone town and a mode of travel, but Owl Court is once again ready for roosting.

Owl Court LLC, a redevelopment group led by Brad Rice, Marcus Ude, Rusty LaForge, Tyler Holmes and Marc Weinmeister, acquired the property at 742 W Britton Road in 2018 from John Dunning III, owner of the Trolley Stop Record Shop in the Classen Ten Penn district. Dunning, an avid collector of antique Oklahoma City memorabilia, bought Owl Court in 2006 and used it to store his archive: 20,000 pieces that were purchased by the Metropolitan Library System and are now housed in the Downtown Library. 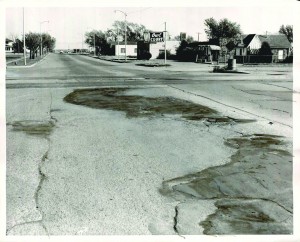 One of those pieces of memorabilia, of course, could not be stored in the library – Owl Court itself is part of Oklahoma’s early history. Long ago absorbed by Oklahoma City’s urban sprawl, the town of Britton was home to Owl Court, a motor lodge where drivers stopped overnight while traveling on the Route 66 bypass around OKC.

Rice began his own effort to acquire Owl Court for redevelopment, initially bidding against the rest of the team, which was then led by the late Thomas Rossiter. Vice president of First Fidelity Bank, Rossiter had seen the possibilities in reviving the “Old Town of Britton” as a business and entertainment district similar to Calle Dos Cinco, the Plaza District or Western Avenue. Rice ultimately joined forces with Rossiter’s group, and the team purchased Owl Court.

“I liked the corner, I liked the infrastructure there and I thought it would be a cool building to bring back to life, though it was in really bad shape,” Rice says. “So, I was chasing it down.”

When Owl Court was completed in 1930, the United States Numbered Highway System was still in its infancy. Car owners were just discovering the 2,500-mile U.S. Highway 66, the first direct route from Chicago to Los Angeles, and Owl Court was part of the relatively new phenomenon of motor courts or “motels.”

When they emerged in the mid-1920s, motor courts satisfied a particular need for long-distance drivers. Before the first motels were built, drivers had a choice between staying in a traditional hotel or, if that was not financially viable, setting up a tent at an “auto camp.” The first acknowledged motor court was the Milestone Mo-Tel of San Luis Obispo, California. The Milestone opened just as the U.S. Numbered Highway System was established in 1926, and Owl Court came just a few years later to provide a place for “Mother Road” travelers to nest near Oklahoma City. 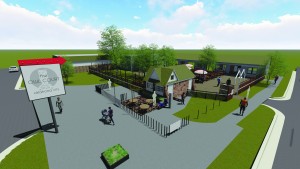 But two major developments doomed Owl Court in the 1950s. Two decades after the motor court opened, OKC was in an expansion mode, annexing large swaths of land and swallowing up surrounding towns. By 1950, Britton was unable to maintain its infrastructure due to its shrinking tax base, so Oklahoma City absorbed it, with the street name “Britton Road” serving as a memorial to the lost town.

But like so many other stops on Route 66, a giant shift in automobile travel pulled customers away from Owl Court. When President Eisenhower established the National System of Interstate and Defense Highways in 1956, the new interstates drew drivers away from the older roads and the businesses that depended on them. Owl Court, with its guest rooms, gas station and cafe, survived into the 1970s, but then sat vacant for decades, slipping into the state of disrepair that Rossiter, Weinmeister and Rice found when they purchased the property two years ago.

“Every unit was filled up halfway with rotting … stuff,” Weinmeister says. “We had to get a roof on it, or they were going to tear it down.”

“It looked like we should have run away,” Rice adds.

Figuratively speaking, Rossiter and his team stood in front of the bulldozers. Oklahoma City declared Owl Court a dilapidated property, targeting it for demolition. In 2017, thieves ripped out the 1930s Coca-Cola sign that once stood outside the front hut. Rossiter and his group closed on the property in early 2018, when Rossiter was undergoing treatment for aggressive brain cancer. Despite every effort to achieve remission, Rossiter died on Sept. 16, 2018, leaving the rest of the team to help achieve his dreams for Owl Court.

Weinmeister said the renovation of the old motel required a close view of everything, for better or worse. New trusses were built in Checotah by Henderson Truss and installed to hold up the roof, which was completely replaced, along with all electrical, water and sewer. Much of the stone on the suites was salvaged to retain the classic look, and as it reaches its final stages of development, a mix of Oklahoma City’s prairie modernity and its antique past can be seen throughout the resurrected court.

“Everything you do in a redevelopment is custom,” Weinmeister says. “It’s not like having a parking lot poured with concrete, it’s more like having a crown put in your mouth.”

To extend the metaphor, the entirety of downtown Britton is receiving extensive surgery. The Ritz Theater, with its original barrel ceiling, was recently renovated; new businesses have also been launched in the past two years such as Zero Tolerance Coffee and Hideout Gallery, which opened in an old bakery building at 911 W. Britton.

Similar tenants are expected at Owl Court, including a coffee shop in the hut and a barber in one of the suites.

“We have a barber there, a small coffee maker, we’d love to have a couple of artists in there,” Rice says. “People who are making things and have ties to the community.”

Once completed, Owl Court will look and feel like the modern use of the name: a food court, with picnic tables and 220-volt electricity and water for use by food trucks. Behind the tables, one of the suites includes a large overhead door, allowing artists or designers to bring in large equipment like lathes and 3D printers.

It is common knowledge that it’s more expensive to redevelop an existing property than to build something new from scratch, but Owl Court was meant for more than just a memory, a fading postcard from a lost era. As Rice, Weinmeister and the rest of the team near the finish line, they said there is satisfaction in saving Owl Court for future generations, keeping the history alive by putting in the work.

“You have to do it that way,” Weinmeister says.” With a property like this, every decision is a crucial decision.”