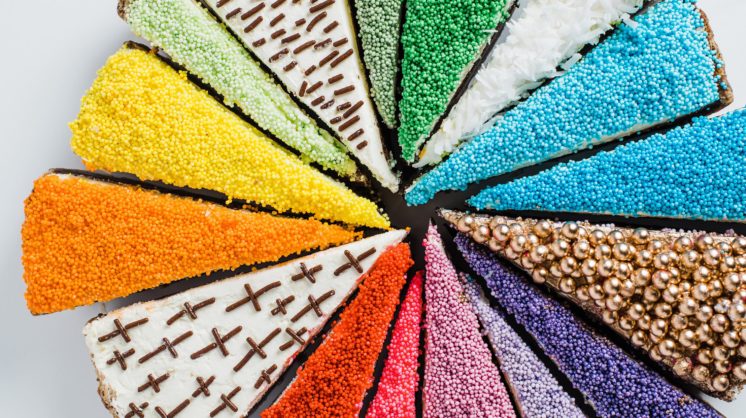 The blackberry vines extended the entire length of the section of fence guarding a vacant lot between two seldom-used roads near Bowlegs, Oklahoma. In the heat of midsummer, the vines would be weighed down with an abundance of fruit, so the children made their way out during the evening cooldown each day with their grandmother’s admonition still stirring up fear: “Watch out for snakes, and don’t eat ’til you’re sick.”

Gorged on berries, arms sticky with juice, the children still had the good sense to take a small bucket back to the house for the annual cobbler bake. Blackberry cobbler was a seasonal treat once upon a time, and no one seemed to mind superheating the kitchen in August’s brutal heat, nor did anyone complain about churning the ice cream that would eventually accompany the cobbler. That was the price of deliciousness.

My maternal grandmother was a Depression-era woman who could cook and bake with equal skill, and those skills were honed in the back of her shotgun shack—the kitchen was always in the back of those houses— while raising seven kids as a single mom; not a widow, but the wife of a serial absconder. In those circumstances, dessert was a treat, not an everyday event. As her grandchildren, all 30 or so of us spent time in her kitchen nearly every summer at some point in our childhood, and homemade ice cream and cobbler were part of “spending the summer with grandmother,” a phrase that was more a silent wish of our parents, who only managed to foist us off for a few days each summer, not the whole season.

I have no idea what the financial cost would look like in real dollars today, but it was clearly a sacrifice for a woman who regularly got “commodities”—the old name of what would become a food stamp program. But she made summer special for us, and dessert from scratch was part of the experience.

We started planning this story with the assumption that we’d have an abundance of nostalgic material to sift through, hoping to narrow it down to a few poignant stories like my experience with blackberry cobbler. Turns out, all of the luster hasn’t worn off; it’s just that most of us have dessert in restaurants now, places where dessert is simply another menu item, and our choices are driven by things less simple than lack and seasonality.

As a culture, though, we still love dessert. Americans spent nearly $53 billion in 2020 on frozen desserts alone, and a Cheesecake Factory survey of guests found that 31 percent of diners think about dessert before ordering appetizers or entrees so as to save room for the final course. As early as 2013, USA Today announced that U.S. consumers reported eating dessert at least twice a week, and many respondents said they often had dessert in the morning or midafternoon as a snack.

We talked to pastry chefs around the metro about different desserts, especially the ones for which they are best known, and we’ve compiled a list of concepts in the 405 that offer delicious options for that final indul- gence after your meal … or whenever.

IS IT STILL CAKE IF IT HAS A CRUST?

Cheesecake is allegedly more than 4,000 years old, originating in ancient Greece. The quality of the proto-cheesecake is unknown, but we have to believe that Carnegie Deli does it better. It’s certain Rachel Porter does. The Mexican Hot Chocolate Cheesecake at Frida (500 Paseo, OKC) is a masterful blend of spicy, creamy, rich, bitter, and slightly sweet. Part of Porter’s genius is their commitment to balancing sweetness with other components, so that even something  eavy like cheesecake feels light-ish. After tasting all Porter’s desserts, give these other worthies a shot:

From the Baker: Rachel Porter

The pastry chef for Humankind Hospitality is probably best known for their work at Frida, where the desserts are as remarkable as the main courses. Porter and executive chef Quinn Carroll frequently collaborate, as they did on the diet-destroying cinnamon roll, but the Mexican Hot Chocolate Cheesecake is all Porter. They graduated from Edmond North, and after a brief hiatus, headed to culinary school.

“I knew my parents wouldn’t not let me go to college, so I talked them into culinary school,” Porter said. “I went to Platt, where you get a rounded education, but I was drawn to the creativity and science of baking. I loved tinkering with recipes, turning them into what I want them to be.”

BROWNIES ARE JUST CAKE, SORT OF…

While not technically a brownie, the flourless chocolate cake at Milo (6201 N Western, OKC) is a marvel of technical skill without sacrificing layers of flavor, and the density and richness hit the palate like a perfect brownie, not a flourless cake. Messerly somehow makes it silky so it feels less heavy. The dish has been modified a few times since open, and the final version has peanut butter and banana, both of which are well balanced so they don’t take over, as peanut butter especially tends to do. As for the brownie wars (not like Girl Scouts with guns, that debate about center pieces or side pieces), we vote center. You can find excellent brownies at these local spots, too:

From the Baker: Kaci Messerly

The newly opened Milo in the Ellison Hotel has such a concentration of culinary talent that it feels like cheating. Messerly is a pastry chef, and like the rest of the Milo team, she arrived with a ton of experience and a voice of her own that translates into her baking. “I wrote a paper in third grade about why I wanted to be a chef,” Messerly said, “so I guess I’ve always known what I wanted to do.”

She attended culinary school at OSUIT (Okmulgee Tech), but she started in restaurants at 16. “I’ve only ever worked in restaurants,” she said. “I like structure, organization, making my own schedule, and working away from the line, so baking was perfect for me.”

Cobbler is essentially deconstructed fruit pie, or reconfigured at least, and we’re waiting to hear back from the American Pie Society for a judgment. The main issue with cobbler, Miller agrees, is the crust, but people are divided on it: Some love crunchy, some soggy, which is an unappetizing term, so we’ll just say poached crust is lovely. Try these other local spots for the city’s best cobblers.

From the Baker: Stephanie Miller

The executive chef at The Hamilton is the rare combination of chef-pastry chef who does both very well. After a stint in college, the Norman native headed for culinary school with the support of her parents. “I already knew I liked baking,” Miller said. “I come from a big family, so everyone had a kitchen task growing up.” She describes baking as a “science experiment,” an idea that appeals to every baker, it seems. The dessert menu at The Hamilton (12232 N May, OKC) is set, but if you’re lucky enough to be there on a weekend when she’s featuring cobbler as a special, you’re going to want it. She par-bakes the crust so it’s never soggy on the bottom, and she’s not afraid of butter.

An organization called the American Pie Council exists. That’s how we learned the first pies were called “coffins” because they were baked in rectangular pans. When discussing its own organization and its members, the APC capitalizes it as “Pie Community.” It’s hard to escape the sense that the desire for exclusivity just below the surface of that capitalized phrase is missing a much more obvious point: America comprises pie communities. Aside from people with dietary restrictions, some form of pie is part of all our experiences: apple, pumpkin, chocolate cream, lemon meringue, pastilla, hand pie, sfeeha, xian bing, empanada, pastelito, spanakopita, quiche, fruit tarts, etc. We are a pie-smitten country, and that pie has become a mainstream dessert in restaurants and not just a special occasion indulgence is unlikely to trouble anyone.

The pear pie at Florence’s (1437 NE 23rd, OKC) is always at the top of our list for must-try pie. Victoria Kemp said there is no butter in the crust, but you’ll swear there is. The pears— she’s looking for a steady local source—are seasoned with sugar, nutmeg, and cinnamon, but this is truly a situation where, to borrow a cliche, the whole is greater than the sum of its parts. You’ll also want to give serious consideration to the pies in these places:

“I can’t imagine my mother didn’t stop by the restaurant on the way home from having me,” Victoria Kemp said. Florence, her mother, opened the eponymous restaurant in 1952, and now both Kemps run it. Yes, Florence is still in the kitchen at 90, and pear pie is on the menu daily.

“I’m sure the recipe developed from my mother’s childhood in Boley, because my grandmother was the baker of the family,” Victoria said. “I’m not really a baker; I just paid attention in the kitchen.”

Victoria Kemp grew up picking blackberries, too, and she remembers her grandmother taking an unnecessary but much appreciated step in the process of making cobbler. “She knew I didn’t like the seeds, so she’d strain them out for me,” she said. “She loved having kids around. At Sunday supper every week, she’d fill a beautiful punch bowl with lemonade, and I can’t believe she wasn’t worried that one of us stampeding kids would break it. And we knew it was the holidays when sweet potato pie hit the table.”

(With apologies to Rihanna)

Our first experience of cake is usually in the form of a birthday cake, and if your parents bought it at Walmart, they had two choices: butter cream or whipped cream icing. The former is like a gigantic stone of butter and sugar that overwhelms your palate and fills you up. The latter is just a one-note sugar bomb. Infants have the most taste buds of all humans—roughly 30,000—and the number decreases as we age. This explains how children can get so frenzied in their joy consuming sugar; they taste it with far more intensity. Ideally, as we age, we come to appreciate more complexity, but for many of us, our first love for sweet cakes never abates. At Brown Egg Bakery (browneggbakery. com), Dake has managed to make cakes for adults who appreciate complexity, but she doesn’t sacrifice the dessert-y nature of the product. She only produces custom cakes, so if you need a quick fix, try these local spots:

From the Baker: Allison Dake

I once watched a group of 30-year olds fence with forks over one of Allison Dake’s birthday cakes. They ate the entire cake, with some having seconds. Dake started Brown Egg Bakery 13 years ago after a very successful career running high-end steakhouses. The list of wedding professionals who trust her as a vendor contains pretty much all the wedding professionals in the state. (Her creativity and skill are on display on the cover of this issue.) What makes the Guthrie-raised baker stand out is the blend of beauty and flavor in her cakes. Wedding cakes can be gimmicky—so can birthday cakes—and often the flavor doesn’t measure up to the clever or beautiful decorations. That is never the case with Brown Egg Bakery. Dake credits her fine dining background with shaping her commitment to building flavor.

“There are three taste points in your mouth: front, middle, and back,” she said. “You have to create dishes that appeal to all three, and that requires layering flavors, and using ingredients that create contrasts, not just a sugar bomb. I use salt, smoked dairy, wood and incense flavors, and floral components … whatever it takes to balance out the flavor profile.