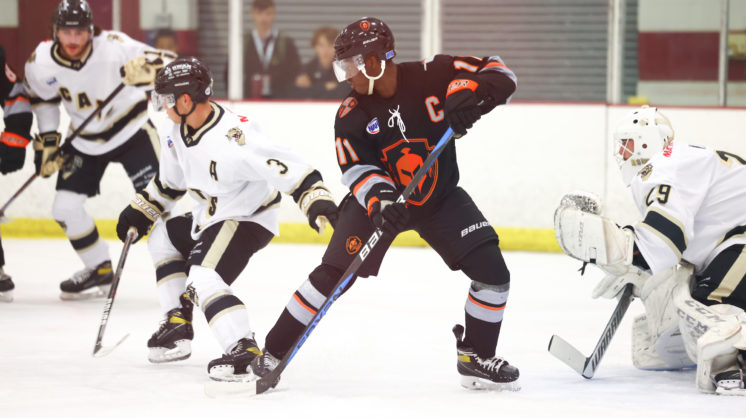 In 2022, the Wichita Falls Warriors hockey team moved to Oklahoma and rebranded as the Oklahoma Warriors. It’s part of the North American Hockey League, a Tier II junior league meant to develop both hockey skills and academic success in young athletes. In addition to athletic competition, teams participate in community-based initiatives and other outreach programs. “As an organization, we are heavily involved in community work and promoting the sport through school visits and volunteer opportunities,” said general manager and head coach Garrett Roth.

The NAHL provides players the opportunity to train, learn, develop and grow — but they are not paid to play. “Players do not receive any compensation, as they are competing to earn a (NCAA) Division I commitment,” Roth said. “Players also have to keep their amateur status to be eligible. Our coaching and scouting staff works 365 days out of the year traveling all over the country to identify talented players to invite to our camps. Players range from ages 17 to 21, and our players are here to further their development. Our off-ice and on-ice schedules are fairly strict.”

Owner Mary Anne Choi’s decision to move the team to Oklahoma lets metro residents watch up-and-coming hockey talent at its finest. “OKC is a much bigger city than Wichita Falls,” Choi said. “Hockey used to be huge eight to 10 years ago, and I want to bring that back to OKC. Community service opportunities are also more abundant here, and it is important to me to have our players give back to the community. Being in a city as large as OKC gives them way more opportunity to fulfill my expectations for them.”

Many players have sacrificed significantly for the chance to play, and Choi believes that in providing for her players, they will be the best they can be. Players receive academic support and resources such as ACT or SAT prep courses, helping them work toward achieving their dreams of being admitted to a good school and one day being drafted into the NHL.

The Warriors’ move to OKC also brings new life to the Blazers Ice Centre. “I’ve personally invested in quite a few changes to Blazers Ice Centre,” Choi said. “I have increased seating capacity along the entire south end, I added a standing platform along the east side which can hold an additional 250 fans, we added VIP seating along the northwest corner and I made upgrades to the suite. I also added a 9-by-16-foot LED video board and LED-colored lights around the rink. I believe we created an unbelievable atmosphere that can serve as a venue and not just a rink.”

Choi is in a unique position as the only owner who’s a woman of color out of the league’s 29 teams. “Hockey is a predominantly male-dominated sport, and like other male-dominated industries, being female and a minority has its challenges,” she said. “Some people dismiss me as just another ‘hockey mom’ — my calls do not get returned, or I don’t get taken seriously. But those are the attitudes and behaviors that drive me. I am more determined than ever to make this organization the best in the country.”

Coinciding with the Oklahoma City Youth Hockey Association’s Hockey Day in Oklahoma, the Warriors held their first home opener at the newly renovated Blazers Ice Centre on Oct. 28 and 29.