If Walls Could Talk - 405 Magazine 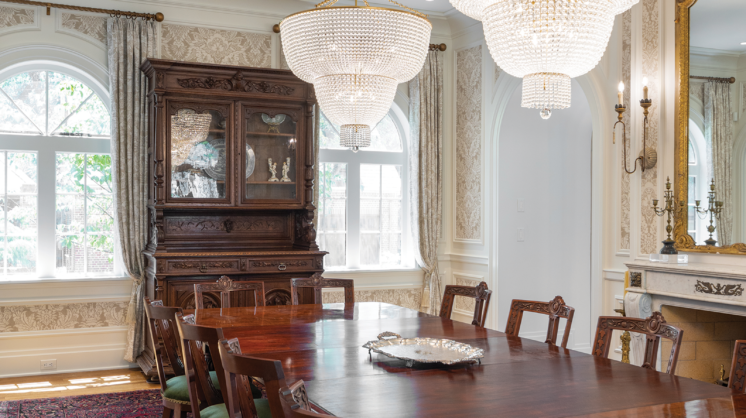 A Tudor revival comes to life in Heritage Hills.

Sometimes a historic home has so much character, it speaks for itself. Such is the case for the Kazenskes’ Heritage Hills home, built in 1925.

“I like to say, ‘There are my plans for the house and then there are the house’s plans for the house,’” said Stephanie Kazenske. She and husband Faustino purchased the Tudor revival-style home in 2020 and soon began renovations, taking great care to elevate the home’s history and often referencing the original blueprints — which they amazingly had on hand.

While unexpected repairs remain a pain, other revelations — like discovering marble underneath a tiled bathroom floor — provided sheer pleasure.

“The faster thing would’ve been to just tile over it, but instead we had this guy come out and do marble restoration,” Kazenske said. Scraping away the old tile and bringing the marble back to prime condition was a lengthy process, but she believes it had to be done.

Another gem: the fireplace in the dining room, which was hidden away after decades of renovations. The Thomson+Thomson interior design team asked if they could “investigate” (read: tear apart) the room to see if the fireplace was still there. The Kazenskes bravely agreed.

“The dining room had been altered somewhat, and we just had a feeling, even before seeing the blueprints, that there was a fireplace there,” Ashford Thomson said. He collaborated with his sister Cody and father Cam on all design decisions for the home, including this one. Indeed, the investigation paid off.

“The bones of it were still there. They resurrected it, essentially,” Kazenske said.

The Thomsons finished out the fireplace with the perfect 18th-century French mantel. Topped by a gigantic antique mirror, the fireplace now provides a stunning central focal point in the dining room.

“It’s how the room was meant to be,” Kazenske said.

The Tudor revival style is fairly rare in Oklahoma City, so finding the right design elements has taken some careful research and creative sourcing. The Thomsons have obtained several antiques from a favorite dealer in Savannah. After poring through design books and online sources, Kazenske ended up finding the pendant light for her entry on eBay.

“There are moments when I’m like, ‘Oh my gosh, this is not easy.’ I don’t want to just order any light that just looks good, because it needs to have the character that the house deserves.

The Thomsons have been very tolerant of my desire for that,” Kazenske said with a laugh.

“I really care about the details. I don’t just want a lovely room; I want it to be a lovely room that’s appropriate for the home.”

Restoring the home back to its original glory was the primary design goal for the Kazenskes and Thomsons alike. Ashford Thomson said such alignment in values and aesthetics makes Kazenske feel like a “kindred spirit from another era.” History-inspired details include the picture railing in the family room and the matching drapes and wallpaper in the dining room.

Along with Thomson+Thomson, Jim Abernathy Construction invited many talented craftsmen into the project. KC Millworks created built-in cabinetry and exceptional woodwork to define the walls, doorways and windows, as well as the ceiling in the family room, which was previously bare. That project alone — a true work of art — took one year.

“This house is definitely a long-game kind of thing,” Kazenske said. “I don’t want to rush any of it. It’s important for me to have the right people working on it and taking good care of it, because it’s an architectural jewel in Oklahoma City.”

The completion of the dining and family rooms marks the end of phase one. Phase two, which has already started, includes the entry and formal living room. Thomson and Kazenske agree: Intentional design takes time, especially when determining what the home “wants” most.

“Some people, especially those living in a newer house, have the luxury of picking out newer things and a finished product that is easier and faster,” Kazenske said, “but old-house people have to care about the preservation, too. We are keeping with the character and sort of soul of the home — to take care and do it the way the house wants it done.”