Is This Voter Proposal MAPS for Norman? - 405 Magazine 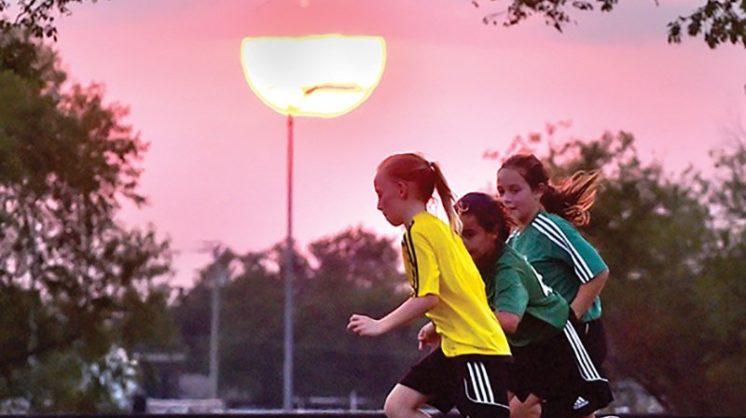 On Oct. 13, Norman residents will vote on a bond issue that will fund more than $209 million in what proponents are calling a “Quality Of Life Initiative.” Norman Forward is the name given to the comprehensive plan to improve parks, pools, community centers, libraries and other lifestyle amenities in the city.

The language in the ballot, which was finalized and approved on Aug. 11, makes clear that the vote is to approve a funding mechanism, not finished plans. Stephen Holman, city councilman for Ward 7, said many of the small details are yet to be nailed down.

“There are a lot of details that are not settled yet,” Holman says, “and a couple of the facilities have pending land purchases.”

Included in the package are what many residents and local government officials are calling long-overdue changes and improvements. Several of the facilities slated to be renovated were built in the 1960s, and they have been showing signs of wear and tear for some time.

“Much of Norman Forward is meant to address aging facilities,” says John Woods, president and CEO of the Norman Chamber of Commerce. “Some of the projects, including a couple [of] new parks, are new to the city, but the oldest facilities on the list were built when Norman’s population was less than 50,000. We’re at 115,000 now.”

The plan calls for a one-half cent sales tax over a 15-year period. The revenue from the taxes collected would fund revenue bonds, which, according to projections, at a rate of 3.75 percent interest would generate $11 million to $15 million annually over the duration of the bonds.

“The margin is not as big a cushion as we would like,” Holman says, “but we are confident that the tax will generate enough revenue to fund the projects, as well as a building and maintenance fund.”

Holman said he believes this is the most ambitious project in the history of the city. Norman’s wastewater treatment facility underwent a program of expansion and refurbishment between 1998 and 2010, and that was its last major undertaking of any considerable size. 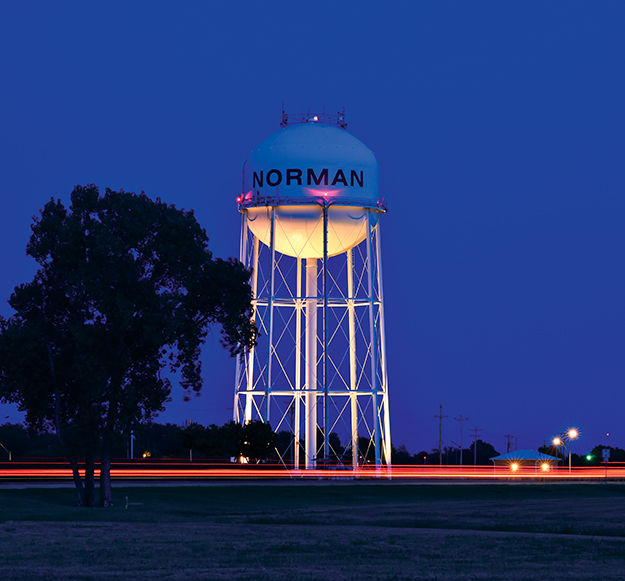 Whereas that was an infrastructure program, Norman Forward is primarily focused on lifestyle.

“There will be one major infrastructure piece, though,” Holman says. “The James Garner Avenue extension would create a direct link from Highway 77 to downtown.”

For drivers who typically approach Norman on I-35S, the choices to get from the Interstate to downtown Norman are not great. The least traffic-heavy option is to take the State Highway 77 exit and go down Flood Avenue. The extension plan would create what Holman calls a “spine” through Norman on James Garner Avenue – formerly Front Street – connecting I-35 to downtown without all the zigzag driving. According to Holman, downtown merchants are very much in favor of the extension.

In fact, it’s difficult to find any organized opposition to Norman Forward among the city’s residents and businesses. Most large bond initiatives tend to draw some organized resistance, as Oklahoma City residents learned during the MAPS initiatives.

The city of Norman conducted a survey during the summer and discovered that more than 70 percent of residents supported the initiative.

“I think the City Council and other proponents have done a good job of encouraging open discussion,” Woods says. “We have seen no organized groups in opposition, but we have had many concerns voiced, and the response has been very agreeable. Parties are working together to resolve these issues.”

In addition to concerns about what the impact would be on the annual Medieval Fair at Reaves Park and questions related to a proposed senior citizens center, the greatest opposition was to a $7 million expo center. Several citizens voiced concerns at a May 21 public meeting, many of whom echoed the words of Norman resident Jayne Crumpley.

Crumpley told the council that she believed the expo center should be paid for by the private sector in conjunction with the Chamber of Commerce and the Norman Convention and Visitors Bureau. She said she had seen no evidence or studies that indicated an expo center would generate revenue for the city. 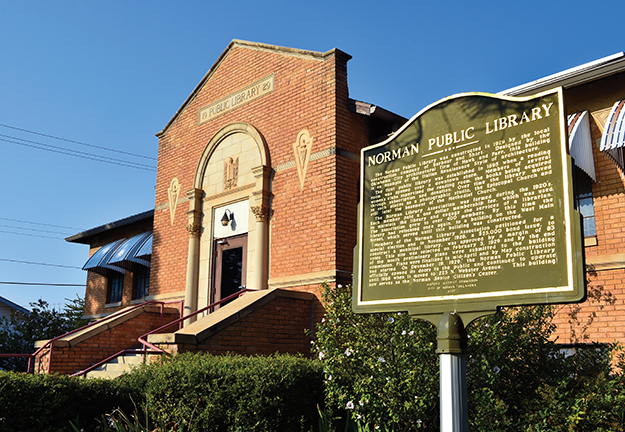 According to Holman, the expo center project is no longer part of Norman Forward.

“The expo center project was the only project that had identifiably negative public feedback,” he says. “It was the only one singled out by the public. We removed it, and we are currently looking at alternative funding strategies.”

The removal of the expo left only the senior citizens center as a major point of concern, but the council and chamber are working to address those concerns, too. Jud Foster, director of Parks and Recreation for the city of Norman, said the current senior center is located in an old library, and like many of the other facilities in the initiative, it is dated. 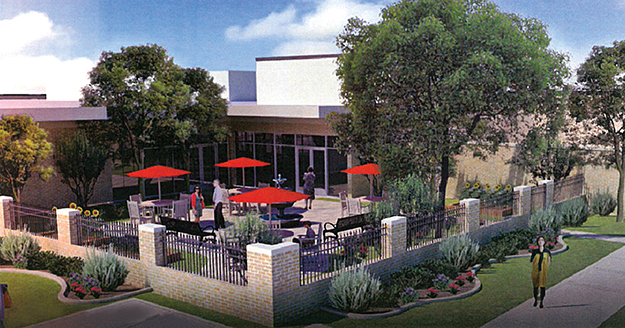 “The location for the new senior center is yet to be determined,” Foster says. “We are having public meetings with Norman’s seniors to determine the best location.” Not only is the site yet to be selected, literature provided by the Parks and Recreation office indicates that a cost also is undetermined. The tentative proposal calls for a new center to be built “in the vicinity of Andrews Park, if feasible.” The alternative is to build it inside the current city library on Gray Street and Webster Avenue.

On the FAQ page of the Norman Forward website, the senior center is not even mentioned. However, a project page on the same website states that the senior center will be located in the current downtown library after the building is renovated for that purpose.

Woods said the new senior center is designed to reflect a changing and growing demographic.

“Today’s seniors are far more active, and like their younger family members, they are increasingly plugged into technology. The new center will be larger – about 20,000 square feet – and it will have more technology, fitness equipment, arts centers and a café.” 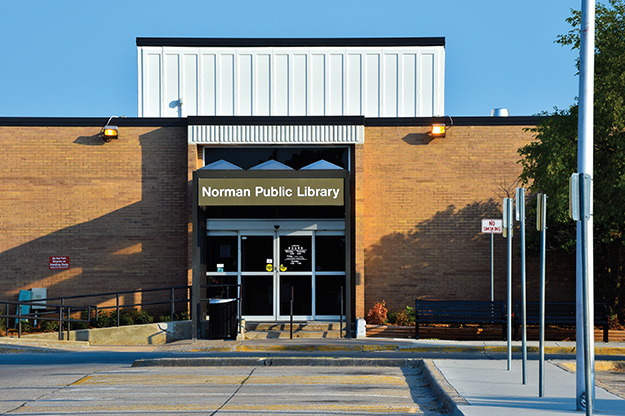 The biggest ticket item in the proposal is a new downtown library at an estimated cost of $39 million. The current downtown library was built in 1966, and according to information provided by the Pioneer Library System – of which Norman is a part – cardholders increased by more than 17 percent in the past six years. There are now twice as many cardholders (86,364) as there were Norman residents (42,000) when the facility was built.

East of the University of Oklahoma campus is an area that, according to Woods and Holman, is underserved by current facilities. An Eastside Library is included in Norman Forward at an estimated cost of $5 million. Woods said IT upgrades were overdue for the libraries, too, as the growth of electronic media has changed the ways libraries do business.

The largest section of Norman Forward concerns municipal parks. Norman has 65 parks, and the park projects section would add five to that total, nearly all of which will be on the city’s east side. New parks would be built in Cedar Lane, Southlake/St. James, Summit Valley/Bellatona, Redlands and Links neighborhoods.

A total of 51 existing parks are slated for renovations. Important changes include consolidation of sports complexes, development of trails, new signage, playground equipment, picnic pavilions, tennis court improvements and other aesthetic changes. The project also would complete the Legacy Trail Loop, connecting segments of the trail from Ruby Grant Park, running east along the Little River Corridor, and south to the Robinson Street Trail. 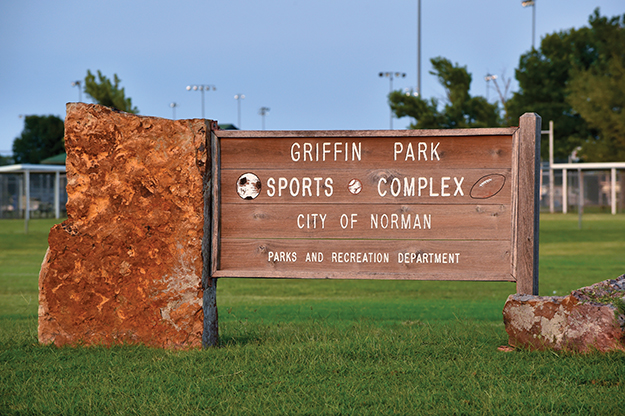 The sports complexes are undergoing major changes, making room for more soccer in Norman. Griffin Park would lose 14 youth softball and baseball fields, as well as four adult flag football fields, to allow for the construction of nine soccer fields. One existing soccer field would be converted to an indoor soccer facility. Holman said the increase in traffic around Griffin Park would necessitate a small infrastructure project to address traffic volume around Robinson and 12th Street.

Youth baseball and softball would have a large complex at Reaves Park. The shift in emphasis at Reaves Park was what caused the concerns by sponsors of the Medieval Fair, one of Norman’s most popular annual events. Woods said the issue has been resolved, and the fair will continue to be hosted at Reaves as it always has.

The sports complex plan also calls for a new, approximately 25-acre site to build an adult softball complex and an eight-field football complex. New indoor basketball and volleyball courts also are part of the project. The proposed gymnasium will replace the current Optimist basketball facility.

The total tally for the parks and sports complex projects is approximately $70 million, which includes a new indoor, competition-grade pool. That facility will be a joint venture between the YMCA of Norman, Norman Public Schools and the city of Norman. With the closing of the competition pool at Oklahoma City Community College, public school swim meets have found it more difficult to locate adequate facilities, and this proposed natatorium certainly could help schools in the area continue swimming and diving programs. 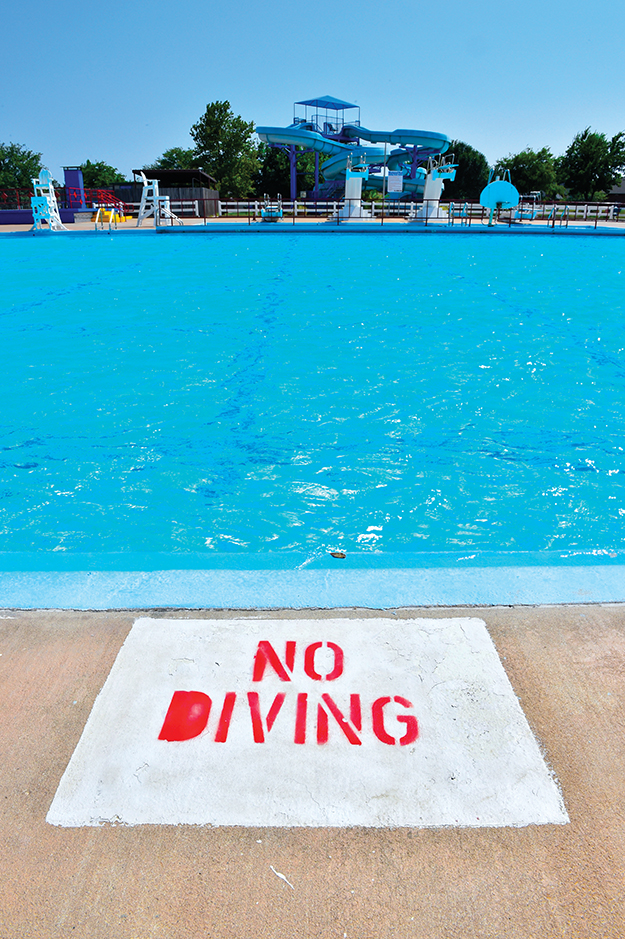 One issue that has yet to be resolved is the lease/ownership of Griffin Park. The land is owned by the State of Oklahoma Department of Mental Health and Substance Abuse. The plan, according to Foster, is to purchase the land from the state. The state had already notified the city of Norman that there would be no more long-term leases for the land.

The cost of the land is hard to estimate, as the process likely will be a standard blind bid, as the sale of state assets typically are. This lack of specificity has created some uncertainty among residents, as well, but Foster and Holman did not mention expected complications related to the purchase.

The Sutton Urban Wilderness Area is part of the Griffin land, but Foster said the care and upkeep of this refuge for more than 400 species of plants and animals is not part of Norman Forward.

“There is a Sutton Wilderness Advisory Committee that is working through a long-range management plan that includes projects such as trail restoration, new signage, removal of unwanted cedar trees, et cetera,” Foster says. “These projects are all being done through city of Norman capital project funding and Federal Trails grant funding.”

Finally, Westwood Pool would replace the existing city pool, which Woods said is near “complete infrastructure failure.” The current pool structure would be razed, and a $12 million facility built in its place. A new pool would allow the city to install a zero-depth entry pool, and add amenities such as water slides, shade areas and a lazy river, lap pool and diving area.

As with MAPS, Norman Forward includes language that calls for the formation of a citizen’s oversight committee that would be appointed by the City Council. With many issues yet unresolved, their task will be to help keep the projects on track and resolve issues of location, design and amenities.

Foster said the city has an idea of what sequencing they would like to see for the projects, but again, the final sequence and prioritization of projects has yet to be determined. As for the funding, the subject of the Oct. 13 vote, Holman said the City Council is still trying to determine if any of the projects will qualify for federal funding, and he believes the James Garner Extension has the best hope for federal funds.

The Norman Forward project overall is remarkably ambitious, and Woods is hopeful that all the lifestyle upgrades will get people out to vote on Oct. 13.

“Municipal elections have historically low turnout,” he says. “We are hoping this package is generating enough excitement to get the proponents to the polls.”