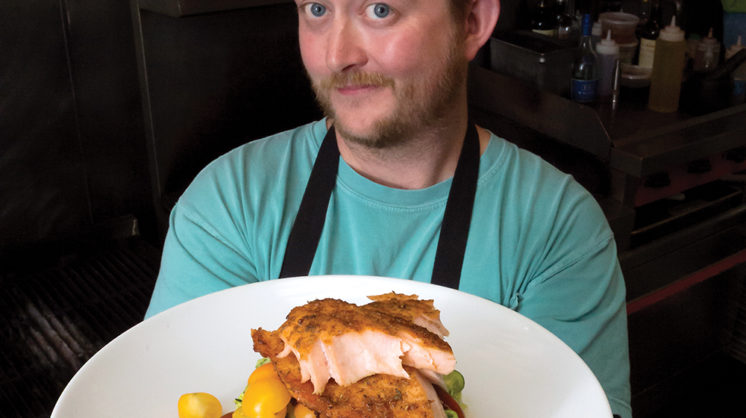 The first original recipe J. Mays created was an onion and lemon ice pie. Never heard of it? That’s not surprising, as Mays himself admits it wasn’t exactly “haute cuisine.”

“I was in the kitchen of my mom’s catfish restaurant, standing on an upside-down milk crate,” Mays recalls. “I would use a butter knife to chop sliced onions, add a few wedges of lemon and then garnish with dill pickle chips and crushed ice. It was at least entertaining for anyone lucky enough to get to observe.”

His mother’s restaurant, Bill’s Fish House, has been in operation outside Waurika since 1962, long before Mays was born. The kitchen is where he learned to love to cook, and he still takes friends on road trips to eat at Bill’s, a stone’s throw from the Red River.

His cooking techniques come from many different members of the family, but all of them share a point of commonality: “The method was simple enjoyment,” Mays says. “There was no pressure. It was a pinch of this, a dash of that, knead until it feels like this – that sort of thing. It’s a great way to learn to cook. I didn’t learn recipe standardization until much later, from my mother.”

Nearly everyone in the family cooked, and Mays remembers recipes from all the cooks, especially his mother, his late uncle Steve and – his first memory of cooking – making chicken and dumplings with his great-grandmother Eula Mays.

Surprisingly, his favorite thing to cook today is fish. You would think someone who grew up in a catfish restaurant would never want to see, smell or taste it again, but Mays still loves to cook all kinds of fish. His nemesis in the kitchen is much more humble: “Poached eggs,” he admits. “For some reason I can never poach an egg properly on the first try. Maybe it’s a mental thing.” He finishes with an “Ugh, poached eggs.”

Outside of the food business, Mays, who is an operating partner in Café 7, spends time with his wife Lauren and daughter Remy. He says you can’t really escape food when you own restaurants, so the couple cooks together. Mays said he likes to think their daughter Remy enjoys watching them cook, too.

Over the summer, they worked up a simple dinner recipe that does not require a lot of prep time, and, depending on the preparation, can be super healthy. Mays used zoodles (zucchini noodles), but you can use pasta, too. The most important component is probably the avocado pesto, a sauce that he said is a great one to keep in your “culinary bag of tricks.” 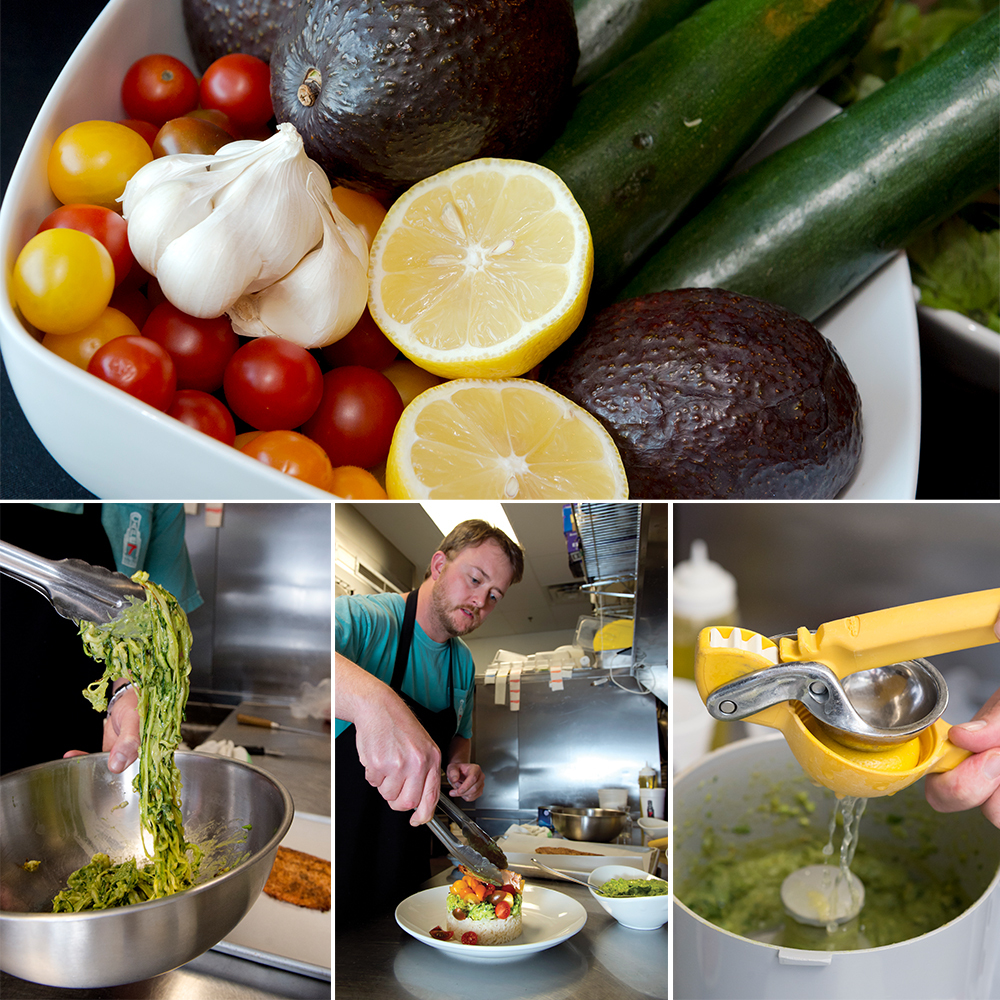 Toast almonds in a dry skillet over medium heat until fragrant. Let cool.

Add remaining ingredients in a food processor and puree until smooth.

Add almonds to mixture and puree again until smooth.

Add water in small amounts to mixture if it is too thick to process, until it is the consistency of pesto.

Mays said to use this sauce only with chilled or room-temperature food, as heat will turn the pesto brown. “This sauce is so versatile, you’ll want to keep some around,” he says. “You can toss it with leftover potatoes for a potato salad, or mix it with leftover pulled, rotisserie chicken for an easy chicken salad.”

For their dinner, the couple made broiled salmon to accompany the zoodles. Mays said the broiler gives the fish a nice color and creates a flaky texture, but grilled, pan-seared and even en papillote are all fine. He adds a house seasoning to his salmon, which he said breaks up the monotony of salt and pepper.